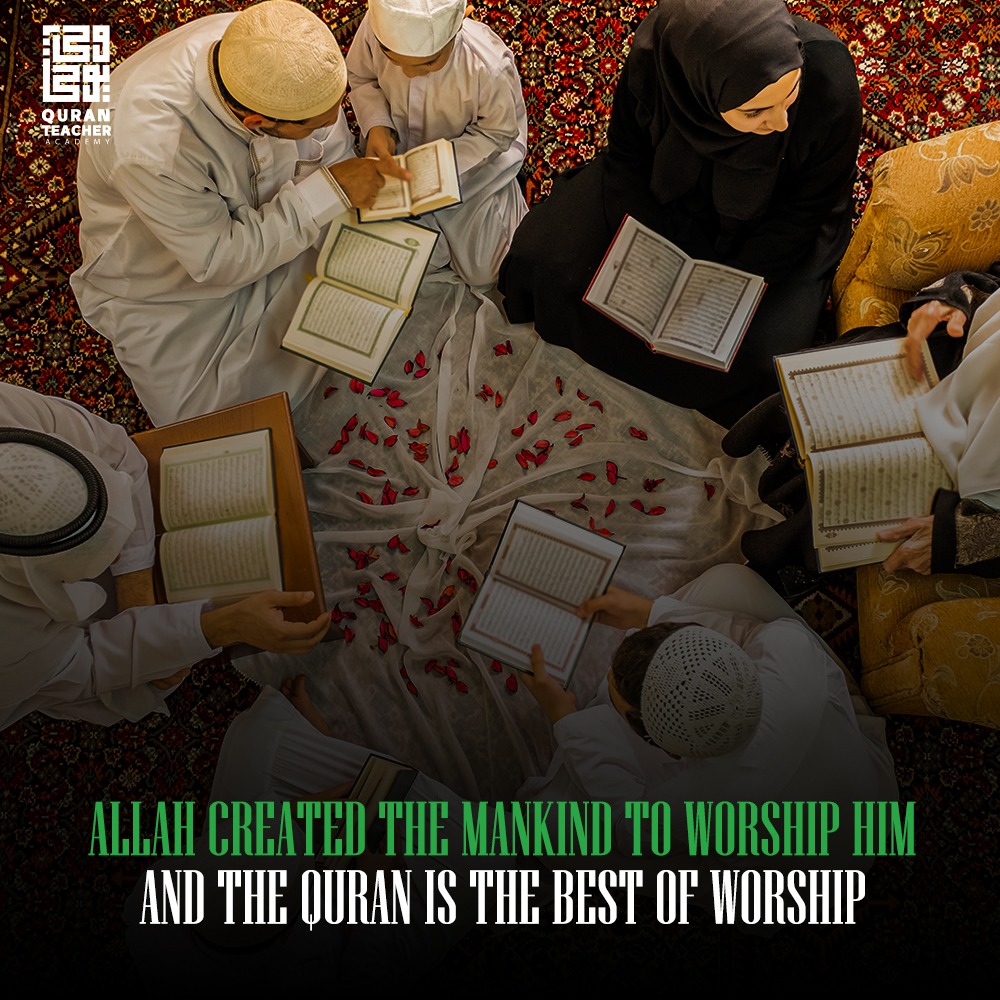 Allah created the Mankind to worship Him, and the Quran is the best of worship

1-The Quran is not just a Book for reading, rather,

one should carry out the personal study of the Quran, with the realization that it is the book of

eternal guidance, sent down by Allah.

2-One should take it as a Book addressed to oneself in particular,

he holds out a mirror to his own shortcomings and a diagnostic of his own weaknesses.

3- Everyone can easily relate to the Quran.

Nonetheless, this is possible only when one approaches it as a living Book meant for one’s own

4- One should look for self-development in it before prescribing it to others.

This is the way of the messengers. First, they attained self-development and then admonished

others. Some study the Quran so as to employ its arguments in humbling and discrediting others.

5- The prophet’s companions, however,

studied it as to mend their own ways. As soon as they grasped the verses of the Quran, they

immediately acted upon it.

They took months for example for completing their study of Surah Al-Baqarah.

Man is the vicegerent of Allah on earth

“When your Lord said to the angels, “Indeed, I will make upon the earth a successive authority.”

They said, “Will You place upon it one who causes corruption therein and sheds blood, while we

exalt You with praise and declare Your perfection?” He [Allah] said, “Indeed, I know that which you

do not know.” And He taught Adam the names – all of them. Then He showed them to the angels

and said, “Inform Me of the names of these, if you are truthful.” They said, “Exalted are You; we

have no knowledge except what You have taught us. Indeed, it is You who is the Knowing, the Wise.”

He said, “Did I not tell you that I know the unseen [aspects] of the heavens and the earth? And I

know what you reveal and what you have concealed.” Surah Al-Baqarah: 30-33

This passage of the Quran recounts the dialogue between Allah and the angels when Allah had decided to appoint Adam to be His vicegerent and progenitor on earth.

1- Allah made man be entrusted with authority over natural resources, utilizing these in a

the constructive way so as to enjoy his life in a meaningful way.

2- Man has also the duty of maintaining his close link with his creator, Allah, and forging cordial

relations with his fellow human beings on earth, and drawing upon divine bounties in accordance

with divine commands and teachings.

The angels submitted: “We glorify You with praise and thanks and sanctify You.” They asked

whether they were not fit for this assignment, particularly in view of their constant celebration of

Allah’s praise. Allah directed them however to observe the unfolding of events. Allah persuaded

them of the rationale behind His selection of man as His vicegerent.

Accordingly, both Adam and the angels were put to the test.

Adam’s nature was made receptive for learning and recognizing names, realizing they’re innate

potential and power, and employs these bounties for his own benefit.

In short, he was enabled to maintain an easy, functional, feasible link with material things and to

utilize these to his advantage.

The angels were aware of their obligations only. They said: “Glorified are You, we have no

knowledge except what you have taught us. It is You, the All-Knowing, the All-wise.” Thus Allah

demonstrated that His choice of man as His vicegerent was perfectly chosen.

for his survival on this earth.

One enjoys the power and authority to employ upon natural resources.

He has not absolute, unlimited power, rather, he derives authority as delegated to him by Allah

Almighty. The Quran alludes to this truth in Quran thus: “Spend of that of which He has made you

It entails justice, equity, and love for fellow human beings, more importantly, it is linked

inextricably with the concept of accountability.

That man as a vicegerent does not have total, unrestricted authority or absolute power. A vicegerent,

by definition, is that he is always submissive and obedient to his master, conscientious in

performing the duties assigned to him, and grateful to his lord and benefactor who is Allah.

The main thesis of the Quran

Man is Allah’s vicegerent. He does not enjoy any absolute position. Rather, he has been sent down in

order to accomplish Allah’s mission and adhere to his worship. If a man recognizes this truth, he

should first fulfill the divine will, sent to him by the messengers and by the scriptures granted to

He should strive to imbibe divine attributes.

A man should realize that Allah is the lord of the worlds, Cherisher of all creatures, Most

Compassionate, Most Merciful, Just, Most Forbearing, and Most Affectionate.

Allah says in Surah Adh-Dhāriyāt verse: 56 “And I did not create the jinn and mankind except to

The Noble Qur’an is the light of the eyes

Reflect on the prophet Muhammad’s Du’aa: “I ask You by every name belonging to You which You

named Yourself with, or revealed in Your Book, or You taught to any of Your creation, or You have

preserved in the knowledge of the unseen with You, that You make the Qur’an the life of my heart

and the light of my bosom, and a departure for my sorrow and a release for my anxiety. Note: Allah

will take away the anxiety and sorrow out of the heart of him who recites this supplication, as

mentioned in this hadith by our prophet (may the peace and blessings of Allah be upon him).”

It is certain that you will feel in the Prophet’s supplication that:

The Noble Qur’an is the light of the eyes, the spring of souls, the detector of anxiety and distress,

Reading, listening, and contemplating the Qur’an is worship, Hearing the Holy Qur’an is silent

“So when the Qur’ān is recited, then listen to it and pay attention that you may receive mercy.” – Al-

Hearing the Qur’an is magic for the hearts and it has authority over them, and irresistible pleasure.

“And those who disbelieved said, ‘Do not listen to this Qur’an, and those who have perverted in it

The Prophet (ﷺ) said to me, “Recite the Qur’an to me.” I said: “O Messenger of Allah! Shall I recite it

reflect on it and understand it, because the listener is stronger in contemplation, and is more active

then the reader because the reader is busy with recitation and Tajweed (rulings).

Characteristics of the believers

obedience; His contemplation may be part of the connection of the faith relationship between him

Allah Almighty says: “The Messenger has believed in what was revealed to him from his Lord, and

[so have] the believers. All of them have believed in Allāh and His angels and His books and His

messengers, [saying], “We make no distinction between any of His messengers.” And they say, “We

hear and we obey. [We seek] Your forgiveness, our Lord, and to You is the [final] destination.”