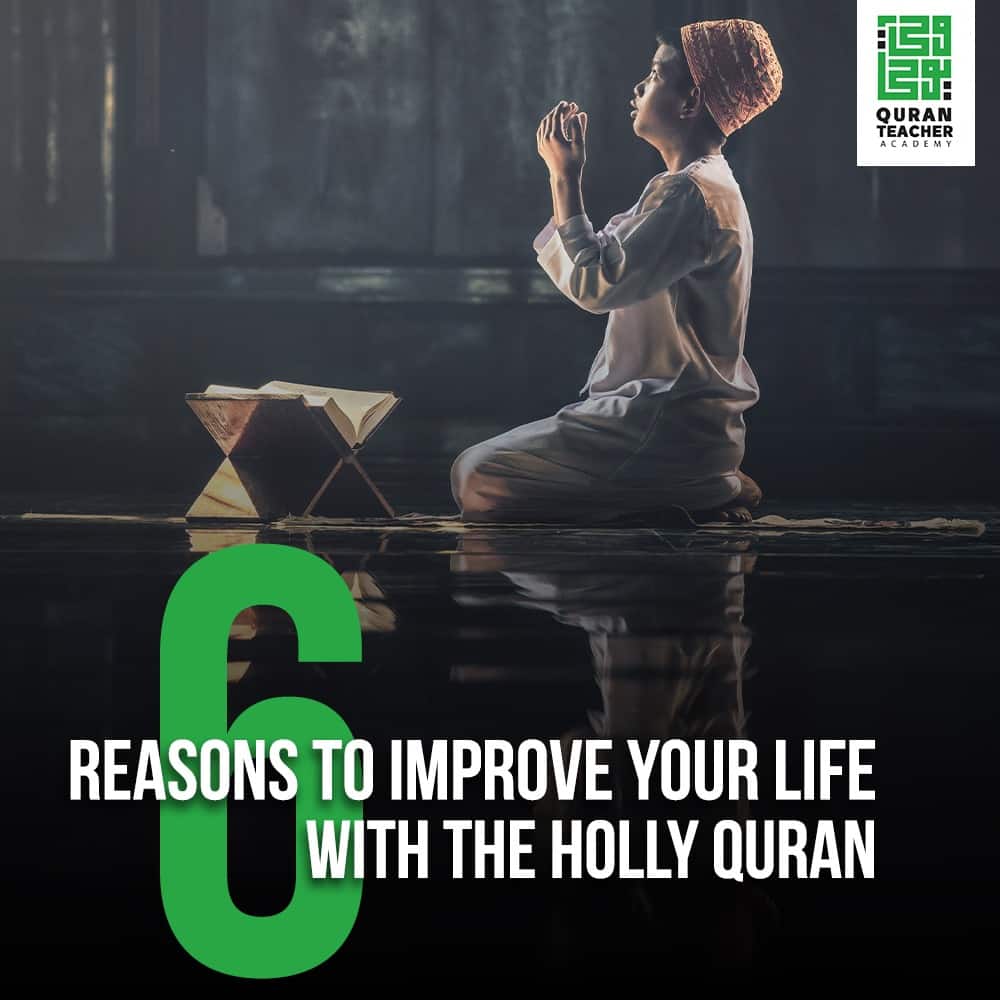 6 reasons to improve your life with The Holly Quran

One of the means through which we can boost our spirituality is by memorizing the Holly Quran. The true extent of

blessings that the Quran contains may never be fathomed by the human intellect. By memorizing Quran, we will

form a relationship with this Holy Book and therefore gain its intercession.

Memorizing the Quran is an act of worship through which one Bless of Allah and reward in the Hereafter.

1 – He takes precedence over others in leading the prayer.

The Messenger (ﷺ) said: ‘The people should be led in prayer by the one among them who has the most knowledge

2 – He is placed in front of others in a common grave, closer to the Qiblah, if it is essential to bury

The Prophet would wrap two of the men slain at Uhud in a single cloth, then he would ask, ‘Which of them knew

more Quran?’ If one of them was pointed out to him, he would put that one in the lahd (niche in the side of the

3 – He takes precedence in leadership if he able to bear that.

Prophet (ﷺ) said: ‘Indeed, by this Book, Allah would exalt some people and degrade others.” (Muslim, 817)

With regard to the Hereafter:

4 – The status of Hafiz will be commensurate with the last verse he memorized.

Prophet (ﷺ) said: “It will be said to the Hafiz: ‘Read, advance in status and recite as you used to do in the world, for your status will be commensurate with the last verse that you recite.” (Tirmizi, 2914, Abu Dawud, 1464).

5 – He will be with the angels, accompanying them.

Prophet (ﷺ) said: “The one who recites the Quran and learns it by heart, will be with the noble righteous scribes (in

6  – The Quran will intercede for him with his Lord.

‘Recite the Quran, for it will come on the Day of Resurrection to intercede for its companions”

Since the Quran is the word of Allah, when you memorize it , this will be the best you ever done!  Memorizing the

The Quran is a healing for physical and psychological diseases. If reading Al-Fatiha cures if Allah permits, what

about who memorize the whole Quran? You will get rid of devilish whispers; your body immunity will increase due

to the great change you experience while you are memorizing the Quran. This is not only a theoretical speech but a

real experience that is witnessed by those who memorized the Quran or parts of it.

When you decide to memorize the Quran, you won’t have extra time, boredom, nor a feeling of concern, stress and

fear.  The Quran will remove concerns, grief and the accumulations of the past, you will be reborned.

“There are two cures for you all: Honey and the Quran.” (Hakim, Bayhaqi)

should be accepted as the newest medical technology.”

It trains the brain to remember things, it challenges the brain. The more you repeat the thing you want to learn, the

stronger the connection between neurons and the brain become. In turn, your brain increases its memory capacity,

taking it beyond its previous capacity and duration to remember.

can make your brain more quick and agile. Memorizing the Quran helps those with Al zheimers and Dementia.

Stress is related to many health afflictions such as heart disease, obesity, anxiety and depression. Lowering our

stress can thus lead to improving our health.

Memorizing the Holly Quran has positive effects on socio-culture life and academic achievement. Memorizing can help

increase your memory space. Memorizing can make you smarter. When you memorize the Holly Quran, your

expressing ability will be stronger because of the classic Arabic you acquire from the Quran.

You will have more ability for dealing, endurance and patience, because memorizing the Holly Quran is not simple

like memorizing a poem, a story, or a song. However, in fact you are changing your attitude towards everything

around you , and thus your behavior will be following what you have memorized.

Neurobiologists believe remembering facts or texts can make your brain more quick and agile. This helps us to build

Memorizing the Quran and regularly revising it can be a form of memory training as a healthy lifelong habit. Youths

who start practicing memory training now can stay sharp in years to come.

This study give us a glimpse of what the untapped nature of the Quran is. There is always something to be