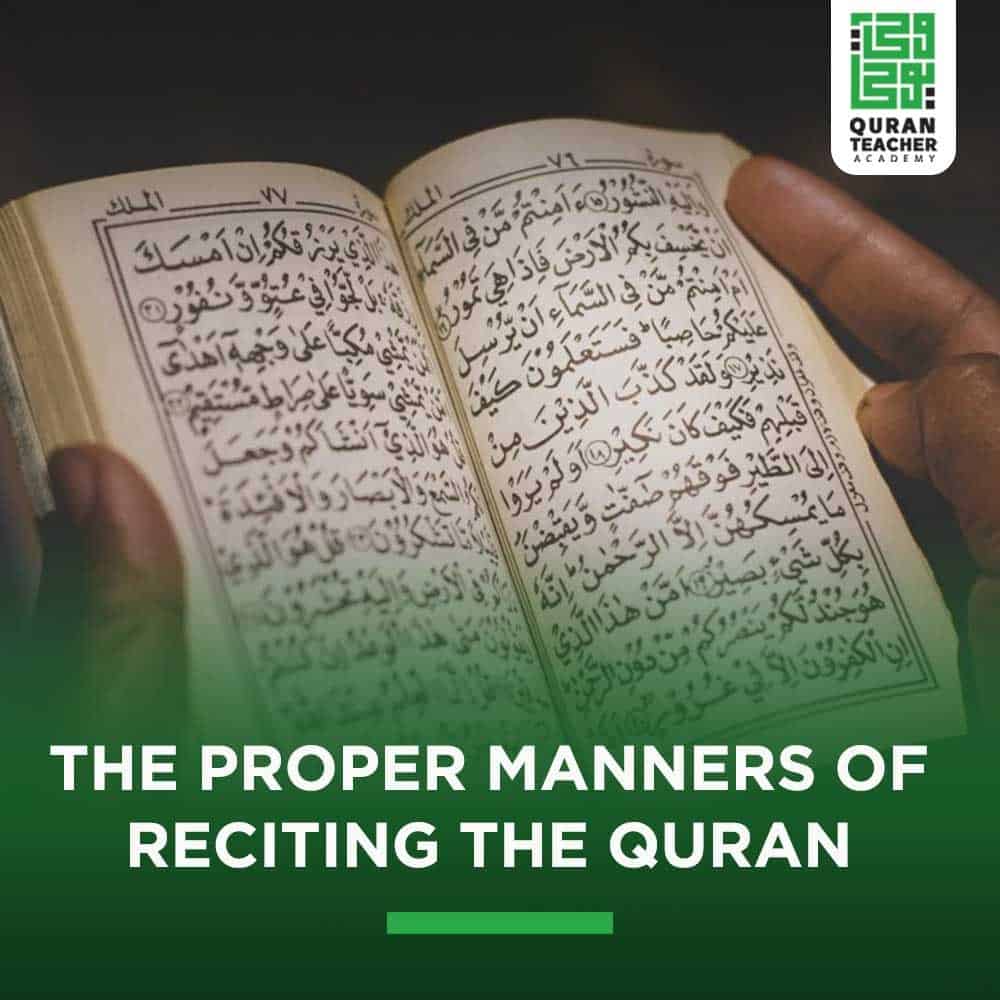 Learn Online “The proper manners of reciting the Quran”

shaytan al-rejim”| “I seek protection by Allah from the accursed Devil”. as the majority of the

scholars said some of the righteous forebears said that one should seek protection after recitation,

as Allah Most High says: “So when you recite the Quran, [first] seek refuge in Allah from Satan, the

expelled [from His mercy].”

to recite, seek refuge. It’s recommended for the reciter of the Quran, whether in prayer or not. It’s

recommended in Prayer in each Rak’a, according to the opinion of our Shafi’i companions.

According to the second opinion, it is only recommended in the first Rak’a.

Saying “The Basmala” to start reciting the Quran

One should take care to recite “Bismillahi al-Rahman al-Rahim”| In the name of Allah, the Most

One’s state should be that of humility and reflection at the beginning and during reciting the Qur’an.

This state is the sought-after objective, through which hearts are illuminated and breasts are

“Then do they not reflect upon the Quran? If it had been from [any] other than Allah, they would

have found within it much contradiction.”

Another Ayah in Surah Sad: 29

“[This is] a blessed Book which We have revealed to you, [O Muhammad], that they might reflect

upon its verses and that those of understanding would be reminded.”

Ibrahim al-Khawwas (Allah be pleased with him), said: “There are five medicines for the heart:

1- Reciting the Quran with pondering.

3- standing at night in prayer.

4- supplicating during the last part of the night.

5- sitting with the righteous.

repeating a verse until dawn, the verse was “If You should punish them – indeed they are Your

servants; but if You forgive them – indeed it is You who is the Exalted in Might, the Wise.”

“So high [above all] is Allah, the Sovereign, the Truth. And, [O Muhammad], do not hasten with

[recitation of] the Quran before its revelation is completed to you, and say, “My Lord, increase me in

• Sa’id ibn Jubayr رضي الله عنه: “And fear a Day when you will be returned to Allah. Then every soul

will be compensated for what it earned, and they will not be wronged [i.e., treated unjustly].”

“Those who deny the Book [i.e., the Qur’an] and that with which We sent Our messengers – they are

going to know When the shackles are around their necks and the chains; they will be dragged in

boiling water; then in the Fire, they will be filled [with flame].”

“O mankind, what has deceived you concerning your Lord, the Generous”

‘Weep, and if you cannot weep then pretend to weep.”

He wept until his tears flowed over his collarbone!

Of another report, it was in the Night prayer affirming that this happened repeatedly, he wept until

the people in the rows behind him heard his weeping!

The Excellence of Reciting the Qur’an

to recite, doing his best to recite it in the best way possible, will have two rewards.”

basil whose fragrance is so sweet, but its taste is bitter. The hypocrite who does not recite the

Qur’an is like a colocynth which has no fragrance and its taste is bitter.”

The Prophet (ﷺ) said: “Envy is justified in regard to two types of persons only: a man whom Allah

has given knowledge of the Quran, and so he recites it during the night and during the day, and a

The state of tranquility when Reciting the Quran

He (ﷺ) said, “That was tranquility which descended as a result of the recitation of the Quran.”

Allah Most High says in Surah Al-Isra’: “(82) And We send down of the Quran that which is healing

and mercy for the believers, but it does not increase the wrongdoers except in loss.”

Learning Online the manners of reciting the Quran

1-Learn From The Comfort Of Your Home Or At Work – Only A Mic, PC And Internet Are must.

2- All Levels and Ages of Students Are Welcome.

3-You Can Choose Any Teacher, Male or Female, To Teach You or Your Kids No Problem in Shaa’

5-And You Will Find It Difficult To Find More Competitive Lesson Prices On the Internet, Yet their

Quality Of Teachers Is Outstanding!