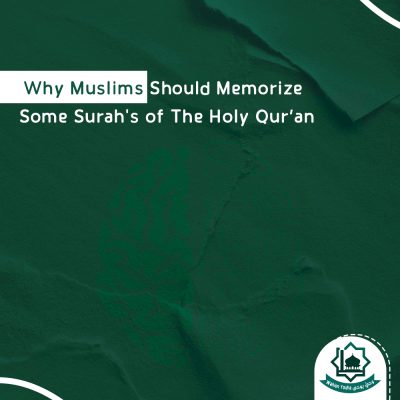 Why Muslims Should Memorize Some Surah’s of The Holy Quran

from Allah (SWT), and the mode of the revelation of the Holy Qur’an to the Prophet (ﷺ) is widely known to

Muslims.  Allah (SWT) said in many verses that the Qur’an was revealed to the prophet (ﷺ) through Angel Jibril.

Every verse in the Holy Qur’an is essential, and every Muslim must believe that no single alphabet in the Holy

Qur’an is unnecessary. The Qur’an has 114 Surah’s, while each Surah has a different number of verses. The Surah

with the highest number of verses is Surat Al-Baqaroh, which has 286 verses. Also, Surah’s with the least number of

verses are Surat Al-kawthar and Surat Al-A’sr, with three verses each.

However, despite the benefits of the entire Surah’s of the Qur’an, some Surah’s have specific benefits attached to

them. No one infers these benefits, but they are benefits shown in various Ahaadith of the prophet (ﷺ). Among

the Surah’s that have specific benefits attached to them are Surat Al-Baqorah and Surat Al-Imran. Moreover, the

importance of Surat Al-Faatiha to the validity of every Solet is not a strange thing to Muslims.‏‏‏

While Jibril was sitting with the Messenger of Allah (ﷺ), he heard a sound above him. He lifted his head and

said: “This is a gate that has been opened in heaven today. It was never opened before.” Then an angel descended

through it; he said: “This is an angel who has come down to earth. He never came down before.” He sent greetings

and said: “Rejoice with two lights given to you. Such lights were not given to any Prophet before you. These (lights)

are Fatihah-til-Kitab (Surat Al-Fatihah), and the concluding Ayat of Surat Al-Baqarah. You will never recite a word

from them without being given the blessings it contains.”

The above Hadith highlights that Surat Al-Fatiha is a light, and it contains a lot of blessings. Allah (SWT) said he

has a portion of the Surah while his slave also has the remaining portion of Surat Al-Fatiha. Also, one will get more

blessings by reciting the last two verses of Surat Al-Baqarah.

I heard the Messenger of Allah (ﷺ) saying, “The Quran and its people who applied it, will be brought on the Day

of Resurrection preceded with Surat Al-Baqarah and Surat Al-‘Imran arguing on behalf of those who applied them.”

The Hadith shows that the Holy Quran will intercede for people who used to learn, memorize and work with the

Holy Quran book. At the same time, these two Surahs will mediate for the people who recite them to incorporate

them into their affairs.

I heard the Messenger of Allah (ﷺ) saying: “Do not turn your houses into graveyards. Satan runs away from the

house in which Surat Al-Baqarah is recited.”

I heard the Prophet (ﷺ) saying, “He who recites the two Ayat at the end of Surat Al-Baqarah at night, they will

Krusty. The usefulness of Aayat Al-Kursiy as a means of asking for Allah’s protection is known in the Hadith of Abu

Hurairah when Shaytaan came to steal from his house. The recitation of the last two verses of Surat Al-Baqarah also

serves as protection to the reciter over the night.

If you want to ask for Allah’s protection, and you want to chase shaytan away for your abode make sure that you

recite Surat Al-Baqarah regularly. Besides, if you want to have more deeds that will intercede on your behalf on the

day of judgment, ensure that you recite Surat Al-Baqarah and Surat Al-Imran regularly. I ask Allah to make us

among those people that will benefit from these two Surahs.

know more about learning Quran online with our academy