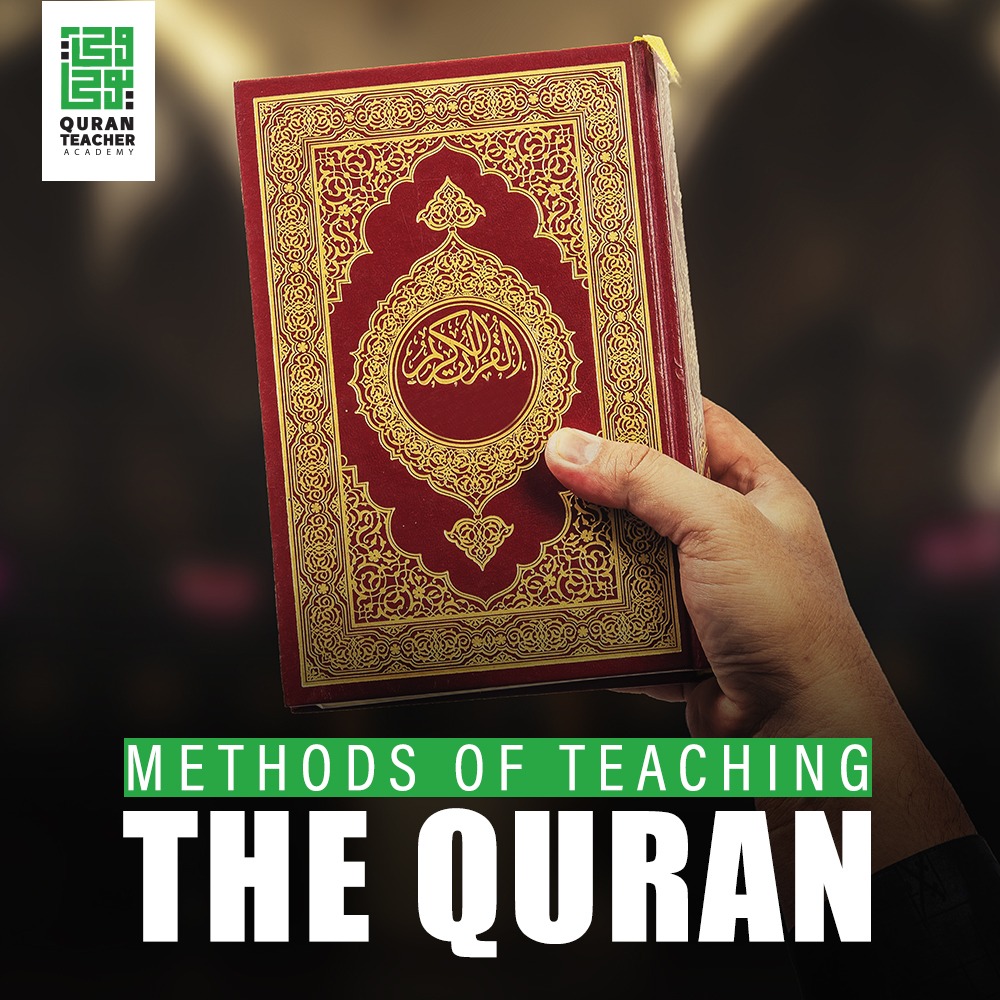 Methods of Teaching the Quran

For the Quran teacher, It is advisable to teach comprehension from the beginning.

For comprehension is a powerful motivator. Without comprehension, the motivation will be lower. Short Surahs of the Qur’an could be used for purposely learning both recitation and comprehension, at the same time

A short, easy-to-understand surah should be selected.

Each surah would comprise a unit of a stud. A vocabulary section should accompany each unit. This section s .........

For the Quran teacher, It is advisable to teach comprehension from the beginning.

For comprehension is a powerful motivator. Without comprehension, the motivation will be lower. Short Surahs of the Qur’an could be used for purposely learning both recitation and comprehension, at the same time

A short, easy-to-understand surah should be selected.

Each surah would comprise a unit of a stud. A vocabulary section should accompany each unit. This section should have all words in a given surah and their nearest equivalents in the student’s mother tongue. A brief section containing all the expressions occurring in the surah would also be helpful. A translation of the entire surah should be available to the student at all times.

students will learn Quranic Arabic and the meaning of the Quran at the same time, surah by surah, starting with al-Faatiha, followed by additional surahs.

The knowledge the students gain from the surahs studied first will make the subsequent surahs easier to learn.

As many expressions, indeed, entire stories (such as the story of Moses) in the Qur’an are retold several times, there is plenty of room for revision
The study of each additional surah will be to an extent a review of prior knowledge learned, God willing.

It will also be a source of new knowledge.

Grammar should be incorporated “as the need arises.” Students should be made aware early of certain grammatical points, such as the fact that there is no difference in Arabic between upper and lower case letters, or that Arabic has a dual form in addition to the singular and plural forms.

Students should also be alerted to the difference between the formation of the first,

second and third person of verbs in the present and past tenses, in both the singular and plural, as these verb forms occur with a high degree of frequency. Common prepositions should also be studied early, as these important linking words are used as frequently in Arabic as in other languages.

When the students learn the meaning of the Quran at the same time as they learn Quranic Arabic,

they will be more motivated to learn the language, as the stories in the Qur’an will make their learning more interesting. Interest is among the best motivators. This way they will learn more and learn it faster than when they use a method that indefinitely delays their access to the meaning of the text.

Another advantage is that when students learn in a way that makes the meaning of the text accessible to them,

they will be in a better position to apply the meaning of what they learn in their daily lives, as indeed was the practice of the early Muslims at the time of the prophet, may peace and blessings be on him. This method will, God willing, contribute to the revitalization of the Muslim community.

The Quran constitutes the proper basis of unity among Muslims

as it were, the Constitution of Muslims worldwide. The Quran as a Constitution shows the Muslims how to build unity and resolve disagreements among themselves. Muslims can contribute to unity by competing for the most accurate interpretation of the Qur’an, and then sharing their knowledge with others. They can resolve disagreements by referring all disputes among themselves, as well as any disputes with People of the Book, to the Qur’an. In this way, the Quran facilitates the pacification and reconciliation of Muslims with each other as well as with non-Muslims.

Simultaneous Listening and Reading the Quran

This takes place by listening to the Quran in Arabic while reading its translation in the learner’s language. In this way,

the student gets to understand the Qur’an by listening to it in Arabic while accessing its content by reading its translation in English.
The fact that our reading takes place in a language other than the language in which the content is being recited should not be a problem. The common element is the meaning of the text. That meaning is the same (or nearly the same) when we listen to the Arabic recital and read the meaning – translated into another language – at the same time. By using this approach repeatedly, we gradually learn the meaning of the various Arabic words, sentences, clauses, and even complete verses. We will learn to associate a given sound with a specific meaning

It is best to start with al-Faatiha, the opening chapter of the Quran

because this is the surah that is recited most frequently by Muslims in their daily prayers. After that, the students should master the short surahs at the end of the Qur’an. These are the surahs that Muslims recite most frequently, after al-Faatiha, in their prayers.

The longer surahs, such as surah Yaa Seen, should be studied after the short surahs have been mastered. By gaining frequent exposure to professional recitations, the student will also learn how a properly recited surah is expected to sound. The student may imitate to the best of his or her ability the reciting habits of the professional reciter.

Of the things that help to memorize the Quran,

Reading to an elaborated Quran Teacher, because correcting mistakes takes precedence over

and it is incumbent on the learner of the Quran to realize that he is exposed to mistaken, and his

to learn the correct way of reading and master what his sheikh or Quran teacher teaches him.

So that, It is worth mentioning that (Wahion Youha) is An Online Quran Academy, Where You can:
1-Learn From The Comfort Of Your Home Or At Work – Only A Mic, PC And Internet Are Required.
2- All Levels And Ages Of Students Are Welcome.
3- You Can Choose Any Teacher, Male Or Female, To Teach You Or Your Kids No Problem In Shaa Allah.
4- They Teach Individuals (1 To 1 Tuition) And Organisations (On Request) And You Will Find It Difficult To Find More Competitive Lesson Prices On The Internet,

Yet their Quality Of Teachers Is Outstanding

God Most High has bestowed through the Quran,

revealed to His Messenger Muhammad, peace and blessings be on him, many benefits on

It is necessary to know the meaning of the Quran. How can one be a true Muslim without acquiring

knowledge of the content of the Book of Islam, the Quran?

Each Muslim must strive to learn classical Arabic and the Quran no matter what his or her nationality. Each Muslim should learn not only to recite the Quran but also to acquire knowledge of

Learning the meaning of the Quran is not a burden. Indeed, knowledge of the Qur’an makes our

burdens lighter. Is it right to focus on recitation of the Quran while delaying the acquisition of the

knowledge of its meaning?