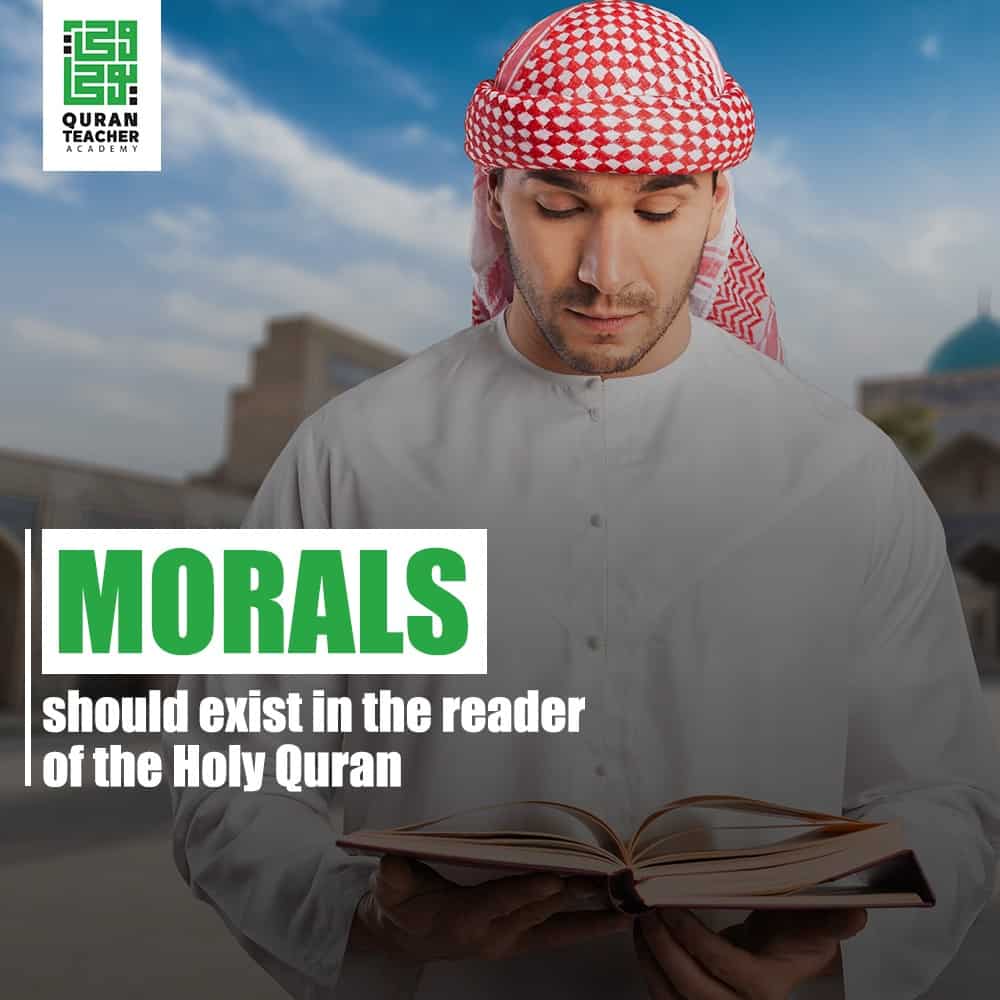 Morals should exist in the reader of the Holy Quran

By obeying the commands, leaving the prohibitions, and reading it according to what God made it easy for him, and to recite it a lot. with pondering its meanings.

And not to be like the ignorant who are exposed, but to achieve what he carried from the Book of Allaah by working. by applying the morals of the HOLY Quran that Allaah praised and called for and beware of the morals that Allaah has disgraced it and insult its people.

And be righteous to obey Allah and His Messenger. and be active in obtaining them day and night. and save time. For him to be a good example and a good example to other of his colleagues and others.

And that the effects of the Book of Allaah appear upon him in his words, deeds, and behavior. with his family, neighbors, colleagues, and others. this is how the believer is, the Almighty said in the description of the Prophet ﷺ: “And indeed, you are of a great moral character.” [Al-Qalam: 4],

Aisha, ﷺ, said: “His creation was the HOLY Quran, ﷺ,” meaning he complies with the commands of the HOLY Quran, ends its prohibitions, disciplines the etiquette that God praised in his book, praises its people. and beware of morals and deeds that Allah has condemned or Defamation of its people.

What is the commandment for those who want to memorize the Holy Quran?

I advise you to be diligent about that, and persevere in memorizing the HOLY Quran night or day, and continue to ask Allaah for success and assistance and to have a good teacher if possible, or a colleague who will help you in that while continuing, and ask Allaah for help and success, and Allaah will help you when sincerity and honesty come. God makes the matter easy, Whoever fears God—He will make things easy for him: ( Al-Talaq).

People of the HOLY Quran

This indicates that the sacrament is better just as a charity in secret is better unless there is a need and interest to speak out, such as an imam who prays with people, and a preacher who preaches to people, and whoever listens to him loudly so that people can listen and benefit.

What is meant is if there is an interest in speaking out, then it is better, and if there is no need to speak out, then the secret is better. So you can read a good read.

The merit of memorizing the HOLY Quran

It is prescribed for you, my brother, to strive to memorize what you can from the Book of Allaah and to recite to some good brothers in schools, mosques, or at home, and be keen on that, so that they correct your reading for you.

As the Prophet said: the best amongst you are the ones who learn HOLY Quran and teach it to others Al-Bukhari, ﷺ, narrated it in his Sahih.

The choice of people is the people of the HOLY Quran who have learned it and worked with it.

as the Prophet said to some of his companions: He said If any one of you goes out in the morning to the mosque and learns two verses of the Book of Allah.

This shows us the merit of learning the Noble HOLY Quran.

My brother, you have to learn the HOLY Quran over the brothers who are known to be proficient in reading the HOLY Quran so that you can benefit and read a correct reading.
As for what is offered to you from forgetfulness, there is no blame on you because every person forgets.

said: Verily I am a human being like you. I remember as you remember and I forget just as you forget. He then performed two prostrations as forgetfulness.

Meaning of reciting the Qur’an

The Prophet passed by Abu Musa Al-Ash`ari while he was reciting  Qur’an at night and he had a very beautiful voice,

He stopped and listened to his recitation, and said:

“This man has been given one of the wind instruments (nice voices) of the family of Dawud (Prophet YOUSEFﷺ ).”

He said: “O Messenger of Allah if I had known that you were listening,

I would have done my best for you. ” Narrated Abu Salama: Abu Huraira said, “Allah’s Apostle said,

‘Whoever does not recite HOLY Quran in a nice voice is not from us,’ and others said extra,”

(that means) to recite it aloud.”

Quran 7:204 “so pay attention and listen quietly when the Quran is recited, so that you may be given mercy.”
The Quran Book has its own unique framework. It’s not poetry. Quran 69:40 “this [Quran] is the speech of an honored messenger.

“Will they not ponder the Quran? Or are there locks upon their hearts?” (Surat Muhammad (47), Verse 24)
To contemplate the meaning, what is the meaning? you understand so that you work.

And so that you advise your brothers to do that if they have knowledge and understanding.

and you recommend that to your brothers and the people of your household.

This is how the believer should have cared if he reads the HOLY Quran be rational and ponder so that he can benefit and work according to The Islamic religion.

A reward for memorizing the HOLY Quran

Ibn Mas’ud (ﷺ): The Messenger of Allah (ﷺ) said, “Whoever recites a letter from the Book of Allah,

he will be credited with a good deed. and a good deed gets a ten-fold reward.

The HOLY Quran is a great bounty, and in reading it there is much goodness