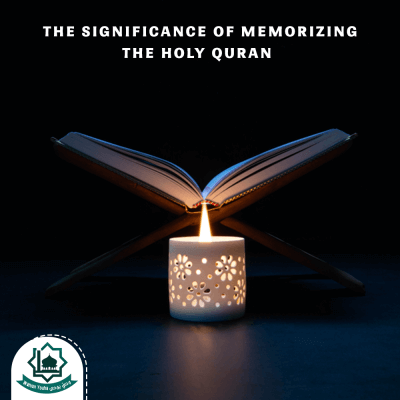 The Significance of Memorizing the Holy Quran

The Holy Quran is Almighty Allah’s word which was revealed upon Prophet Muhammad by the Revelation Honest,

the Angel Gabriel, ” Peace be upon Them”. The Creator has made the Holy Quran as the Miracle of miracles and

dared all mankind to try their best to come up with something that is even close to the Holy Book, but they are

absolutely unable to do it.

Besides, Almighty Allah has took it upon Himself to preserve the Holy Book from any fabrication and human-made

Without doubt, reciting the Holy Quran and memorizing its sacred verses lies at the heart of good deeds that all

Muslims feel honored when reciting and learning the Holy Quran by heart.

Therefore, Muslims at the beginning of the Da’ua

number one when it comes to learning and gaining knowledge.

Imam Ahmad Ibn Hanbal, a famous scholar who lived during the  Abbasid Caliphate, advised his companions to

teach their kids all about the Quran right before learning the Hadith and other important issues.

real intention in the verses within their contexts. This, consequently, provides Muslims with a better understanding

Scientifically speaking, numerous contemporary scientific studies have shown that reading regularly is one of the

hence, reciting the Holy Quran takes top priority when it is related to reading as it is the purest book ever with

hundreds of miracles of both scientific and historical, with zero errors or contradictions. Reciting the religious

verses of the Quran empowers the memory as it is proven.

Prophet Muhammad, Peace be upon Him, described those who neglect reciting the Quran as empty neglected

houses, while those who are constantly reading have positive attitudes and behaviors in their lives. There are many

benefits of memorizing the Holy Quran, some of which are :

2.. assisting the Muslim to get rid of sorrows and depression.

3.. protecting the Muslim from Satan’s temptations.

4.. increasing Muslims’ faith in their religion.

for more details , check our online Quran classes  and offers