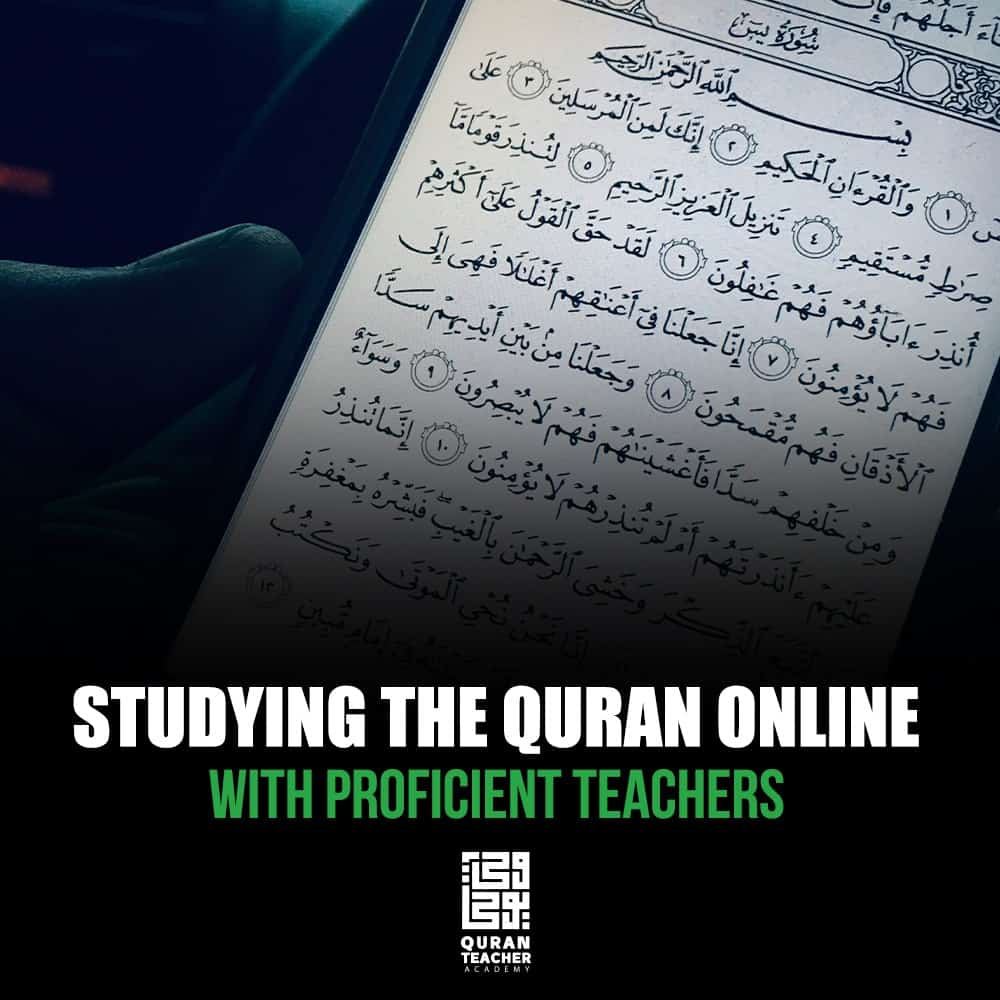 The structure of Islam is built from the base of the Quran; therefore, studying the Quran should

occupy a primary place in our daily lives.

what Allah عزوجل says about us: “You are the best nation produced [as an example] for mankind.”

Studying the Quran, the word of Allah, and reciting it has an immense impact on our soul. Once we

understand Arabic, the language of the Quran, imagine how much power that connection would be

between you and Allah Most High.

When studying the Quran, Allah Most High is talking to us directly!

We should believe that when we are studying the Quran, Allah Most High is speaking to us. Allah

“Allah has sent down the best statement: a consistent Book wherein is reiteration. The skins shiver

therefrom of those who fear their Lord; then their skins and their hearts relax at the remembrance

[i.e., mention] of Allah. That is the guidance of Allah by which He guides whom He wills. And one

whom Allah sends astray – for him there is no guide.”

Studying The Quran in a group

Prophet (ﷺ) and according to actions of the pure righteous forebears. The Messenger of Allah (ﷺ)

said, “Any group of people that assemble in one of the Houses of Allah to recite the Book of Allah,

learning and teaching it, tranquility will descend upon them, mercy will engulf them, angels will

surround them and Allah will make mention of them to those (the angels) in His proximity.”

Mu’awiyyah رضي الله عنه said that the prophet (ﷺ) approached a circle of his companions and asked,

“What caused you to sit together?” they said, “We sat to remember Allah Most High and praise Him

because He guided us to Islam and graced us with it.” The Prophet said, “[Angel] Gabriel (Peace be

upon him) came to me and informed me that Allah boasts of you the angels.”

[Tirmidhi and Nasa’i related it]

Ibn Abbas رضي الله عنه said, “Whoever listens to a verse of the Quran, it is a light for him.”

Ibn Abi Dawud related that Abu Darda’ رضي الله عنه would study the Quran with a group, all of them

There are also many clear texts concerning the superiority of the one who gathers people to recite;

such as the statement of the prophet: “Whoever leads to good, he is like the one who does it.”

Also, “Guiding a single person to Islam is better for you than the best of camels.”

Allah Most High says: “Cooperate in righteousness and piety but do not cooperate in sin and

Having Sincerity with Studying the Quran Book of Allah

Believing that the Quran is the speech of Allah Most High and His revelation; people are incapable

of anything like it even if they all joined together to attempt it.

It was narrated that Tamim Ad-Dari said:

“The Messenger of Allah said: ‘Religion is sincerity (An-Nasihah).’ They said: ‘To whom, O

Messenger of Allah?’ he said: ‘To Allah, to His Book, to His Messenger, to the imams of the Muslims,

and to their common folk.”‘

Having sincerity with Quran by; extolling its glory, reciting it and beautifying its recitation, being

humble while recitation, and correctly pronouncing its letters.

Having sincerity with Quran by; believing in everything contains in Quran; not exceeding its

exhortations; pondering Quran’s amazing wonders; acting depending on what has unequivocal

meaning, and calling others to Quran.

Studying the Quran and the Sunnah of Prophet Muhammad (ﷺ)

understanding of this Deen (religion).

To understand the various ways of being grateful, patient, we need to know the advice of the

Messenger of Allah. We need to know the Quran and the Qualities of Prophet Muhammad (ﷺ) which

Hadith “We went to ‘A’isha and said, ‘Umm al-Mu’minin, what was the character of the Messenger

of Allah (ﷺ), like?’ She replied, ‘His character was the Qur’an. Can you recite the sura entitled “The

“It is the believers who are successful: those who are humble in their prayer; those who turn away

from the worthless talk; those who actively pay zakat; those who guard their private parts.” (23:1-5)’

She said, ‘That was the character of the Messenger of Allah, may Allah bless him and grant him

“Holding firmly to the rope of Allah”

“And hold firmly to the rope of Allah all together and do not become divided. And remember the

became, by His favor, brothers.”

Many are being tested In Our age nowadays, we are witnessing the attempts to change the Quran on

a massive scale. This is a reminder to ourselves we need to establish the Quran in our daily lives. It

is the time for faith and reflection on what Allah said. “Indeed, it is We who sent down the message

“So, which of the favors of your Lord would you deny?

Blessed is the name of your Lord, Owner of Majesty and Honor.” Surah Ar-Rahman: 77