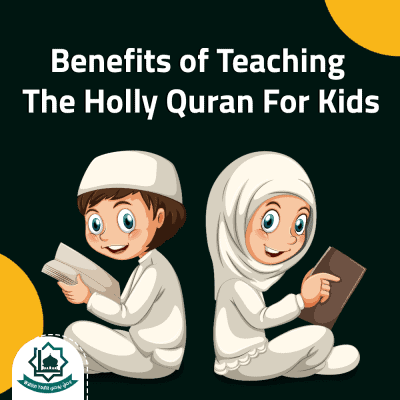 benefits of teaching the holly Quran for kids

Childhood is the age in which children can be molded into any shape. They could be good if taught good and bad if they learn badly. This is when the child looks up to his parents, and they can easily direct him due to his real attachment to them to learn holly Quran.

This is also when the child’s memory is powerful, and his head is pure. The child is emotionally prepared to get and memorize whatever knowledge he is taught. As an old saying says, “Memorizing while young is like carving into a stone.” That that is carved into a rock cannot easily be eliminated; instead, it stays as the year’s pass.

Likewise, memorizing one who memorized in his younger years will stay healthy for a long time, mostly if a consistent and structured review supports it. Memorization of the Qur’an and studying its proper recitation during one’s youth is a lucky and successful method that was practiced by the Pious Predecessors of this ummah.

So, the holly Quran is best among good to be taught children in early life. Teaching holly Quran to the children leads to both eternal and temporal benefits.

“The best of you is (he) who learns and teaches the Holy Qur’an.”

Teaching the holly Quran at an early age would make the child best in deeds. Reading the  holly Quran is a virtuous Nobel act. Reading each word of the Quran is itself counted good deed and it leads to the benefits on the day of judgment. Quran teaches the likes and dislikes of God. Quran keeps children away from evils as it tells punishments of disbeliever nations. It teaches the history of successful and destroyed Nations.

holly Quran is guidance to spend life in the temporary world.

“And indeed, we have made easy for the direction and direction, but is there anyone who will take advice?” (Surah Al-Qamar 54, verse 17)

Reading the Quran at home brings blessings and increase bonds with God, the creator. is full of scientific facts so teaching Quran to the children would increase your scientific knowledge.

Quran increases the obedience of the god and this would ultimately lead to the confirmation of the paradise. Quran is the source of forgiveness on the day of judgment.