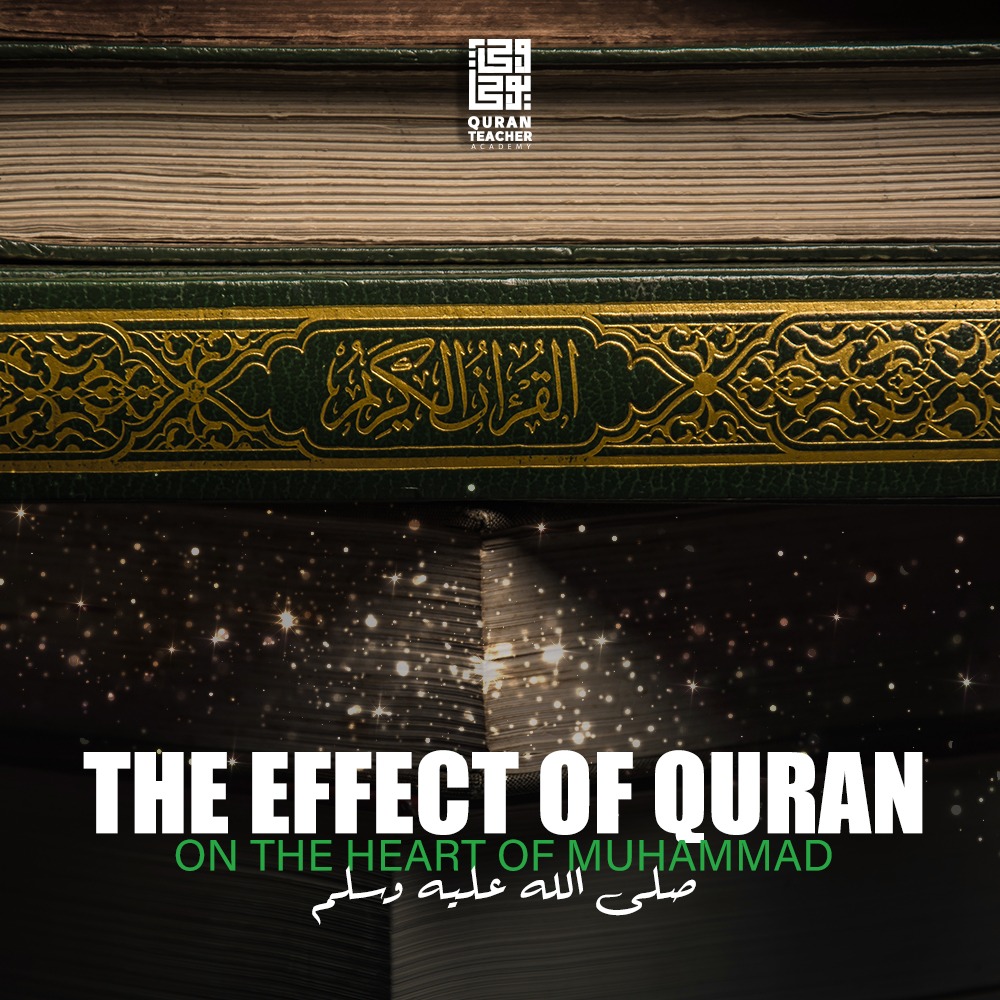 The effect of Quran on the heart of Muhammad

“Indeed, in the creation of the heavens and the earth and the alternation of the night and the day are

signs for those of understanding –

creation of the heavens and the earth, [saying], “Our Lord, You did not create this aimlessly; exalted

are You [above such a thing]; then protect us from the punishment of the Fire.

Our Lord, indeed whoever You admit to the Fire – You have disgraced him and for the wrongdoers,

there are no helpers

Our Lord, indeed we have heard a caller [i.e., Prophet Muhammad (ﷺ)] calling to faith, [saying],

‘Belief in your Lord,’ and we have believed. Allah, so forgives us our sins and removes from us

our misdeeds, and causes us to die among the righteous.

Our Lord, and grant us what You promised us through Your messengers and do not disgrace us on

the Day of Resurrection. Indeed, You do not fail in [Your] promise.”

The Prophet Muhammadصلى الله عليه وسلم was at home with his wife Aishaرضي الله عنها, as she

‘One night; Heصلى الله عليه وسلم was with me and said “O Aisha, leave me tonight to worship Allah” I

She said ‘He stood to pray then sat and wept till he wetted his beard, and sat wept till he

wetted his lap; then he sat wept till he wetted the earth with his tears; then came Bilal to tell him

it’s almost dawn and asked him why are you crying? He said, “Why shouldn’t I cry and tonight Allah

has sent me some verses that anyone should reflect.”

The great effect of The Quran on the heart of the Prophetصلى الله عليه وسلم.

Yes, the disbeliever is guided by the words of Allah and becomes Muslim!

The disobedient are guided by the words of Allah and repent to Allah!

And the righteous faithful Muslim is guided by the words of Allah and becomes more loving to Him!

• Ash-Shikhkhir quoted his father as saying, “I came to the Prophet when he was engaged in prayer,

and heard a sound from within him like the bubbling of a pot,” meaning that he was weeping. In a

version he said, “I saw the Prophet praying and a sound came from his breast like the rumbling of a

• Ibn Mas’ud (May Allah be pleased with him) reported in Quran:

The Prophet (ﷺ) said to me: “Recite the Qur’an to me”. I said, “O Messenger of Allah! Shall I recite

the Qur’an to you, when it has been revealed to you?” He (ﷺ) replied, “I love to hear it recited by

Here is a kind notice; that reciting Quran is a state of worship!

And listening to Quran from other people is a state of worship!

Both listening and reciting bring you close to Allahعزوجل and a higher level.

He said ‘I recited to him a portion from Surat An-Nisa’. When I reached the Ayah:

“How (will it be) then, when We bring from each nation a witness and We bring you (O Muhammad

I saw his eyes were shedding tears.’

His eyes صلى الله عليه وسلم were full of tears from listening to the words of Allah عزوجل!

What made him cry while he is the Prophet who knows The Quran by heart!

Almost all of these verses of Surah Al-nisa’ talk about personal issues, like between husbands and

But these verses include reminding and intimidation from Allah. Then we reach this Ayah which

talks about Doomsday and gathering before Allah and bringing a witness for each nation, the

the prophet cried as all prophets cried!

As described in Surah Mariam: 58

Abraham and Israel [i.e., Jacob], and of those whom We guided and chose. When the verses of the

Most Merciful were recited to them, they fell in prostration and weeping.”

This is the guidance of the Prophet in reciting the Qur’an and reflecting on the verses, and it is a

form of understanding of the meaning. To stay your heart with thinking about the meaning of what

you are reading, so you know the meaning of each verse, and contemplate the commands and

prohibitions. And the effect of The Qur’an is that it does not absorb sorrows, worries, and anxieties,

but rather removes them completely and replaces the sad heart with a happy one, bliss, and

happiness, and this is only for the people of the Quran.

“O you who have believed, respond to Allāh and to the Messenger when he calls you to that which

gives your life. And know that Allah intervenes between a man and his heart and that to Him you

So this verse indicates that a beneficial life is achieved by responding to Allah and His Messenger.

Qatada said: It is the Quran in which there is life, trust, deliverance, and infallibility in this world

Where are we Muslims from the characteristics that Allah loves?

We ask Allah سبحانه وتعالى to guide us to supplication, obedience, and repentance to the words of