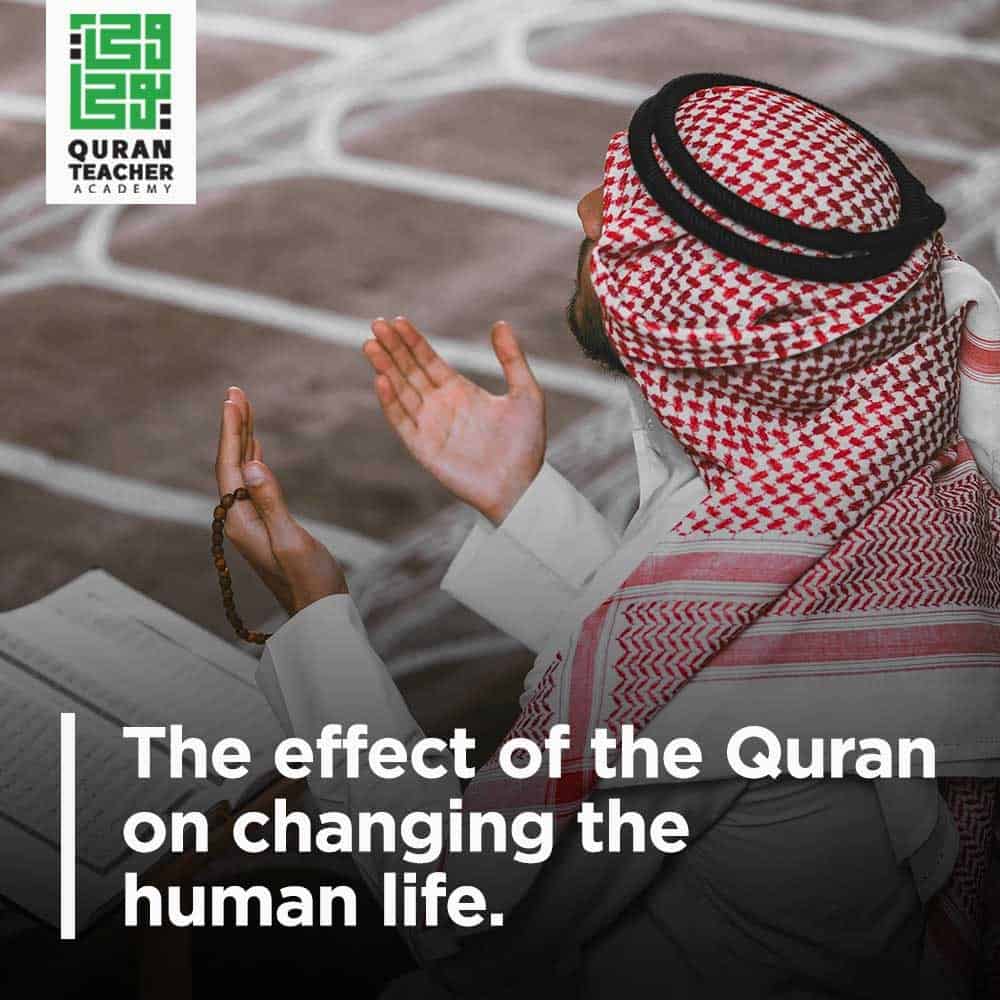 The effect of the Quran on changing the human life

1- Lack of attention to worship and Spirituality

Whenever a Muslim pays special attention to the depth of faith and nurtures the love of Allah in his heart, totally relies on him, and purges his heart of grudges, envy, and conceit, such a Muslim will experience a sort of unrivaled happiness. Such a person will never entertain the thought of replacing this kind of happiness with any other feeling. The person who does not have such an experience may prefer any other type of attraction.

Let's discuss three problems that hinder the path to succe .........

1- Lack of attention to worship and Spirituality

Whenever a Muslim pays special attention to the depth of faith and nurtures the love of Allah in his heart, totally relies on him, and purges his heart of grudges, envy, and conceit, such a Muslim will experience a sort of unrivaled happiness. Such a person will never entertain the thought of replacing this kind of happiness with any other feeling. The person who does not have such an experience may prefer any other type of attraction.

Lack of Islamic Knowledge increases the possibility of being influenced by raised doubts and misconceptions. This is because a good standard of knowledge gives a person a methodological basis to evaluate what he may receive of new information or analysis. By contrast, a person who lacks such a methodological basis is prone to confusion and serious errors of knowledge.

mental and spiritual emptiness leaves one’s mind and heart receptive to any thought, including that which is evil. A person whose time is full, and whose mind and spirit are preoccupied with the pursuit of knowledge, action, and faith has an effective shield that protects from deviant ideas and nagging thoughts.

The effect of the Quran on changing people

The intention is not to achieve the largest number of khitmats (full recitation) “Or add to it, and recite the Qurān with measured recitation.” Al-Muzzammil (4) “This is how the recitation of the Prophet – may God’s prayers and peace be upon him – was.”

The Companions – may God be pleased with them – followed him, as the recitation of the Quran was a reason for depriving Abu Musa – may God be pleased with him – and the Ash’aris from sleep; This is because when the Quran’s love enters the heart, every love that distracts him from the words of the Lord of the Worlds will depart from him, and the first effect of the Quran on its owner is that it deprives him of prolonged sleep.

What honor is there for these personalities of faith, those whose homes are known and distinguished from among the houses, as humans distinguish the shining stars in the dark sky, and that is only by the Quran!

“Has the time not come for those who have believed that their hearts should become humbly submissive at the remembrance of Allah and what has come down of the truth? And let them not be like those who were given the Scripture before, and a long period passed over them, so their hearts hardened, and many of them are defiantly disobedient.” Surah Al-Hadid Ayah (16).

The power of change is inside the Quran!

Perhaps the most important thing brought about from the Quran is to awaken the power of change within us, this force that remained hidden and dormant until the words of the Quran came to awaken us and it began to exercise its activity. It is a gigantic force that lies within each of us. I can name it to you, reader, “The power of change”. This power makes a person rich, makes another creative, and makes some people leaders, artists, or scholars.

I would like to tell you that this power is present in each of us, and it is waiting for you to awaken it from its slumber, to enjoy life and live as if you were born again.

But there are some barriers that encapsulate this power and prevent you from reaching it.

Allah says in Surah Ar-Ra‘d, Ayah11: “Indeed, Allāh will not change the condition of a people until they change what is in themselves.”
So there is a change that must start from within the soul, and this will lead to a change in the circumstances surrounding you, and this is the word of God Almighty that we must trust in.

If you meditate on everything around you, you will find that everything is in a constant state of change, the water you drink, the food you eat, the clothes you wear, even the people around you change, so why do you stay the same one, you must take an action that guarantees you happiness and success in this world and the hereafter.

My brother. My sister… when you intend to change, you will find that God Almighty is with you he is saying: (69) “And those who strive for Us – We will surely guide them to Our ways.[1136] And indeed, Allah is with the doers of good.” Al-‘Ankabūt.

the intended jihad in the verse is the jihad of the soul, the jihad of knowledge, the jihad of worshiping God, and jihad of patience over the harm of others … because this verse was revealed in Mecca and jihad with the sword has not been imposed, and therefore it talks about a jihad that you must take in yourself first and then in others.

Allah says in Surah Yunus Ayah (100): “And it is not for a soul [i.e., anyone] to believe except by permission of Allah, and He will place defilement upon those who will not use reason.”

The third thing is that you

must benefit from the experiences and mistakes of others, and you can practice this technique by observing the actions of others and the extent of the failure or success of these actions, that is, to gain experience from the experiences of others, and this is the intelligent person who resembles a successful merchant who does not lose anything but finds him in a situation Permanent profit, you have to monitor well, analyze and draw lessons.
“And when you have decided, then rely upon Allah. Indeed, Allah loves those who rely [upon Him].” Al-‘Imran 159

“And will provide for him from where he does not expect. And whoever relies upon Allah – then He is sufficient for him. Indeed, Allah will accomplish His purpose. Allah has already set for everything a [decreed] extent.” At-Talaq(3)

the most important technical change is patience and read with me these words of Moses to his people in the most difficult situation experienced them: “Said Moses to his people, “Seek help through Allah and be patient. Indeed, the earth belongs to Allah. He causes to inherit it whom He wills of His servants. And the [best] outcome is for the righteous.” Al-A‘rāf (128)