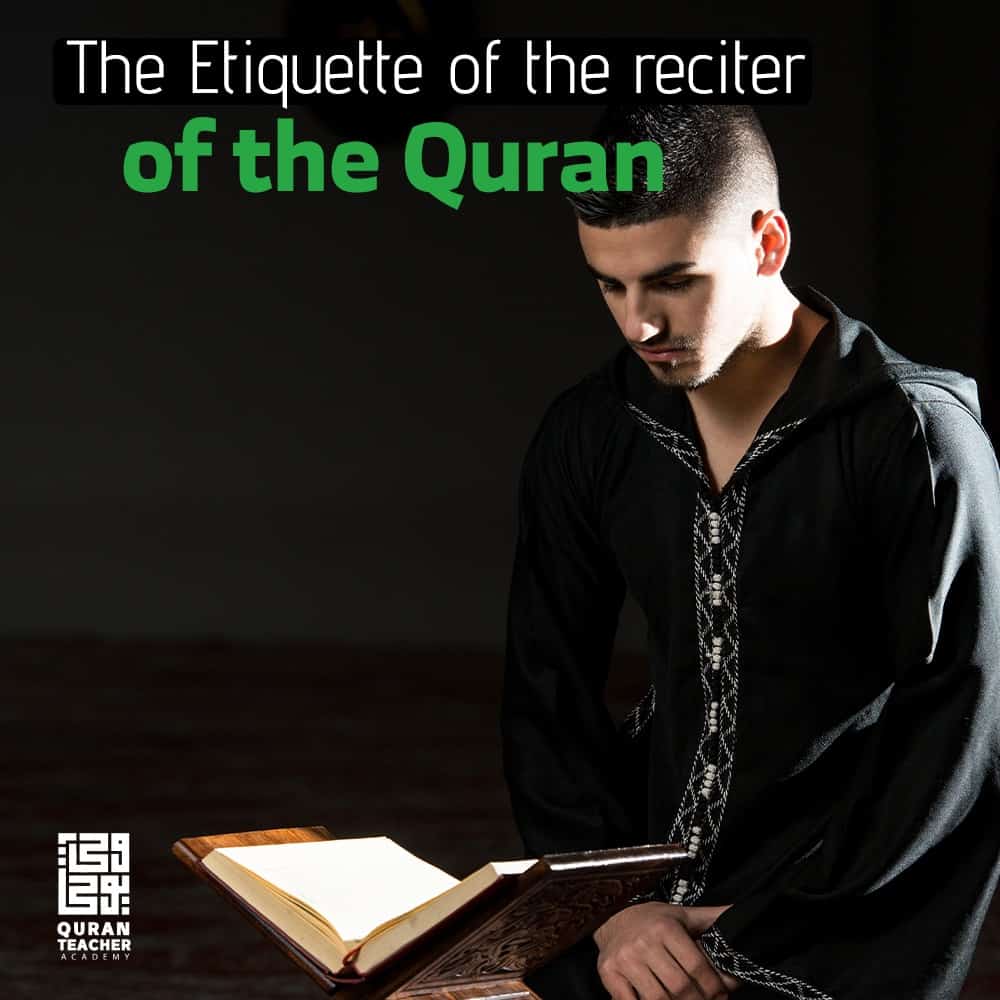 If one wants to recite the Quran, he should clean his mouth with a Miswak “Tooth-stick” or the like.
The first things that are obligatory for the reciter of the .........

The first things that are obligatory for the reciter of the Quran are sincerity, and observing proper

etiquette with the Quran. The reciter of the Quran should bring to mind that he is addressing Allah

Most High and therefore should read as if one sees Allah Most High, and even if he cannot see

If one wants to recite the Quran, he should clean his mouth with a Miswak “Tooth-stick” or the like.

Miswak is a Sunnah from the prophet (ﷺ), it is a twig from the Arak tree.

When reciting the Quran, it is recommended to be in a state of ritual purity if you are in a minor

impurity. If one doesn’t find water, he should make Tayammum

It is unlawful for a person in a state of major impurity or during menstruation to recite the Quran;

the only thing that is permissible for them to silently peruse the Mus-haf without touching it. There

screen without uttering the words.

The reciter of the Quran chooses a clean place for recitation

Anyone who sits in a mosque should intend spiritual retreat.

And it is recommended for the reciter to face the Qibla, even when not in prayer. It is related in

Hadith: “the best way to sit is facing Qibla.” One sits with humility, tranquility, and dignity.

and give thought to the creation of the heavens and the earth, [saying], “Our Lord, You did not

create this aimlessly; exalted are You [above such a thing]; then protect us from the punishment of

Allah عزوجل says: “Indeed, those who recite the Book of Allah and establish prayer and spend [in His

cause] out of what We have provided them, secretly and publicly, [can] expect a transaction [i.e.,

His bounty. Indeed, He is Forgiving and Appreciative.”

Allah (ﷺ) said, “The best amongst you is the one who learns the Quran and teaches it.”

Al-Bukhari related it in his Sahih, which is the most authentic book after the Quran.

A’isha (May Allah be pleased with her) reported:

The Messenger of Allah (ﷺ) Said, “The one who recites the Quran and is skillful therein will be with

the obedient, noble, recording angels; and the one who reads the Quran stammering, it being

difficult for him, has two rewards.”

Abu Musa reported: The Prophet (ﷺ) Said, “The example of a believer who recites the Qur’an and

acts on it, like a citron which tastes nice and smells nice. And the example of a believer who does not

recite the Qur’an but acts on it is like a date which tastes good but has no smell. And the example of

and has a bad smell.”

‘Umar b. al Khattab reported: Allah’s Messenger as saying, “By this Book God exalts some peoples

The precedence of the reciter of the Quran over others

Prophet (ﷺ) Said, “The person who is best versed in the recitation of the Book of Allah, should lead

the prayer; but if all those present equally verse in it, then the one who has the most knowledge

of the Sunnah; if they are equal in that respect too, then the one who has emigrated (to Al-Madinah)

first, if they are equal in this respect also, then the oldest of them. No man should lead another in

prayer where the latter has authority, or sit in his house, without his permission”.

Honoring the people of the Quran and prohibiting of annoying them

Allah Most High says: “whoever honors the symbols [i.e., rites] of Allah – indeed, it is from the piety

“And lower your wing [i.e., show kindness] to those who follow you of the believers.” Surah Ash-

Allah Most High says: “And those who harm believing men and believing women for [something]

other than what they have earned [i.e., deserved] have certainly borne upon themselves a slander

two casualties from Uhud and then say, “Which of the two deceased has amassed the most Quran?”

if one of them was indicated, he would put him first in the Lahd [the portion of the gravesite closest

Abu Hurayra (May Allah be pleased with him) stated that the prophet (ﷺ) Said, “Indeed, Allah

Mighty and Glorious says, “Whoever shows enmity to a friend of mine, I have declared war upon

It is established in Sahihayn that the prophet (ﷺ) Said, “Whoever prays the morning prayer is under

is under His guardianship.”

[being] sincere to Him in religion, inclining to truth, and to establish prayer and to give zakat. And

that is the correct religion.”

“One of the foundations of Islam”, Hadith narrated on the authority of Umar b. al-Khattab, the

Messenger of Allah (ﷺ) Said:(The value of) an action depends on the intention behind it. A man will

be rewarded only for what he intended.”

attaining some worldly objectives, such as wealth, leadership, influence, rising above his peers, or

gaining people’s praise. Allah Most High says, “Whoever desires the harvest of the Hereafter – We

world – We give him thereof, but there is not for him in the Hereafter any share.”

guided to include: generosity, openhandedness, cheerful face, self-control, and being above vile

• The teacher of the Quran should be constantly conscious of Allah Most High, when Alone and

• The teacher of the Quran’s reliance on all affairs should be upon Allah Most High.

• The teacher of the Quran should be kind to whoever recites to him, and well-mannered with him.

It is from Abu Hurairah that the Messenger of Allah said: “Religion is sincerity, religion

is sincerity, religion is sincerity.” They said; “To whom, O Messenger of Allah?” He said: “To Allah,

to His Book, to His Messenger, to the imams of the Muslims and to their common folk.”

• The teacher of the Quran is sincere towards Allah and His Book, honoring its reciters and its

students. He teaches his students gently, harmonizing the students’ hearts and encouraging them to

• The teacher of the Quran should mention the superiority of learning the Quran to his students.

Increases their desires, changes them from being incline towards the world and from being

deluded by it. He should mention the righteous worshipers of Allah and the ranks of the prophets

(May Allah bless them and grant them peace)