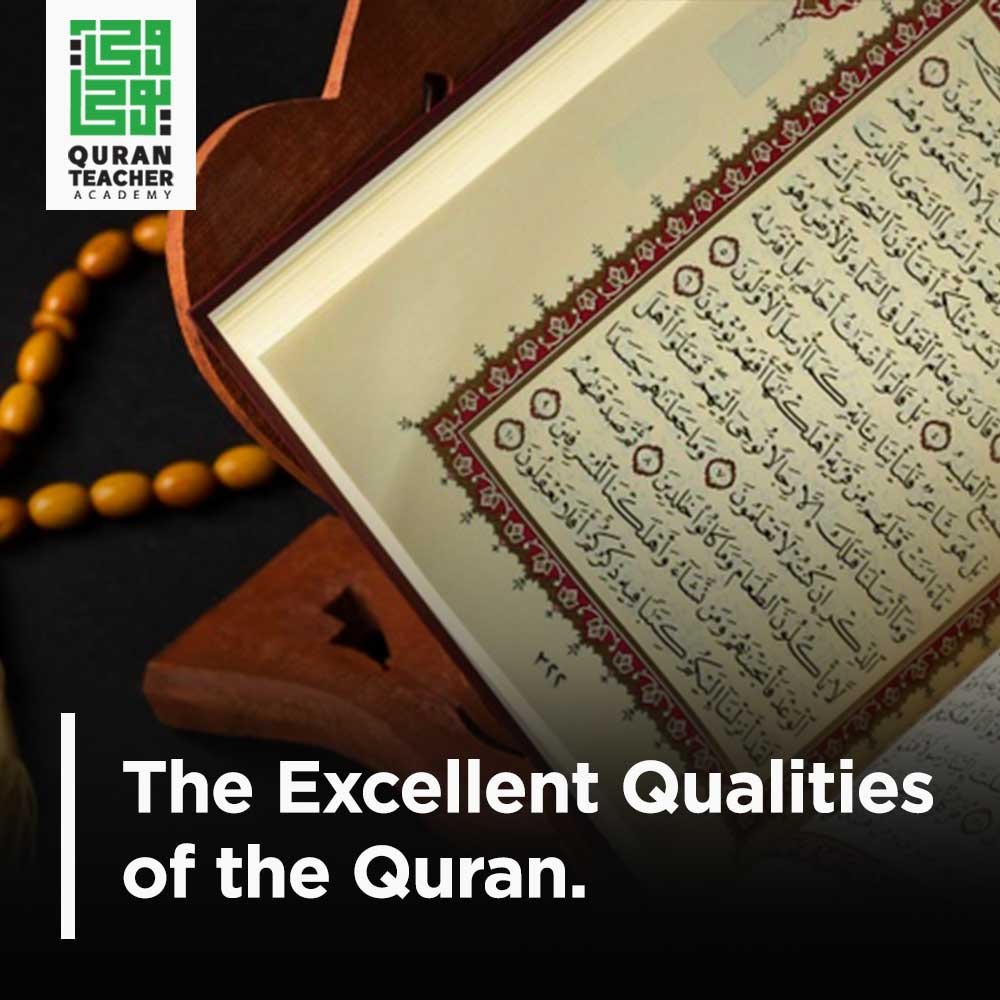 The Excellent Qualities of the Quran

ranks pleading for those who recite them. Recite Surah Al-Baqara, for using it produces blessing and

abandoning it produces regret, and the slothful are unable to recite it.” Muslim transmitted it.

This hadith is evidence of the virtue of reciting the Qur’an, and its great reward, and that it will

intercede for its people on the Day of Resurrection in entering Paradise.

intercede for a man. Fasting says, ‘O my Lord, I have kept him away from his food and his passions

by day, so accept my intercession for him.’ The Qur’an says, ‘I have kept him away from sleep by

Baihaqi transmitted it in Shu’ab al-iman.

Interaction with the Quran

Hudhaifah رضي الله عنهreported: I performed Salaat with the Prophet (ﷺ) one night, and he started

reciting Surat Al- Baqarah. I thought that he would go in Ruku’ (bowing posture in Salat) at the end

of one hundred Ayat, but he continued (reciting), and I thought that he would perhaps recite (this

Surah) in the whole Rak’ah (prayer), but he continued the recitation; I thought he would perhaps

bow on completing (this Surah). He (ﷺ) then started reciting Surat An-Nisa’ which he followed with

Surat Al-Imran. He recited leisurely. When he recited an Ayah which mentioned the tasbeeh, he

would say Subhan Allah and when he recited the Ayah which tells how the Rubb is to be asked, the

Messenger of Allah (ﷺ) would then ask from Him, and when he (ﷺ) recited an Ayah asking one to

Rabbiyal-Azim (My Rubb the Great is free from imperfection)”; his bowing lasted about the same

length of time as his standing, (and then on returning to the standing posture after Ruku’) he would

Praise be to You, Our Rubb!),” and he would then stand about the same length of time as he had

spent in bowing. He would then prostrate himself and say, “Subhana Rabbiyal-A’la (My Rubb the

Supreme is free from imperfection),” and his prostration lasted nearly the same length of time as his

This is the guidance of the Prophet, صلى الله عليه وسلم, in reciting the Qur’an and interacting with the

verses and it is a form of reflection and understanding of the meaning.

each verse and contemplates the commands and prohibitions.

The Qur’an is the word of Allah, “Allah is the Light of the heavens and the earth. The example of His

light is like a niche within which is a lamp.” Surah An-Noor: 35

basil whose fragrance is so sweet, but its taste is bitter. The hypocrite who does not recite the Quran

And the Qur’an does not absorb sorrows, worries, and anxieties, but rather removes them

completely, and replaces the sad heart with a happy one, bliss, and happiness, and this is only for

the people of the Qur’an.

The Qur’an is a remedy for sadness

Life is not a bed of roses at all. We suffer from heartbreak, pain, sadness, and calamity, any of which

might drive us to depression. However, at times depression can just be there for no specific reason

at all, and when this happens it is essential that we seek help for it. Allah عزوجل The Creator of

Universe has revealed The Noble Quran as a guide for mankind till the last Day, giving us a guide to

help us through depression. Some verses of the Holy Quran are valuable reading during depression

and anxiety, as their meanings and messages can help alleviate depression, InshaaAllah. For

• Surah Ad-Duha Allah عزوجل revealed it at a time when our Prophet صلى الله عليه وسلم was depressed.

the poor and the needy and to mention the blessings of Allah upon him.

that the prophet felt internal by revealing to him the Quran. Allah mentions how He will raise His

name of the prophet around the world, and today every second somewhere on earth the Adhaan is

going on and someone somewhere is saying Muhammad Rasulullah. Allah also mentions that both

before hardship and after hardship are easy. Then He instructs His prophet to pray to His Lord after

he is done with his duties to the people

Allah will take away the anxiety and sorrow out of the heart of him who recites this supplication, as

mentioned in this hadith by our prophet صلى الله عليه وسلم:

You have total mastery over me), Your command over me is forever executed and Your decree over

I is just.” I ask You by every name belonging to You which You named Yourself with, or revealed

in Your Book, or You taught to any of Your creation, or You have preserved in the knowledge of the

unseen with You, that You make the Qur’an the life of my heart and the light of my bosom, and a

departure for my sorrow and a release for my anxiety.”

Quran is the Quran, study group.