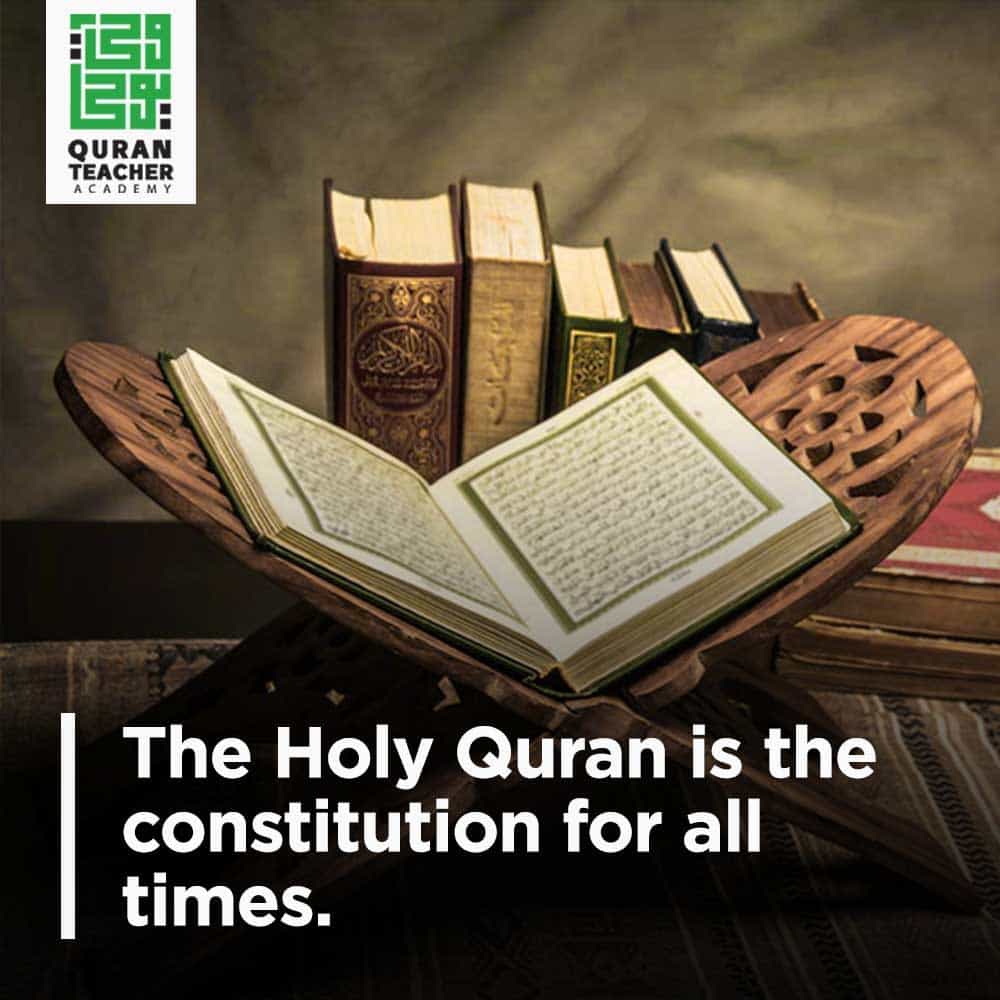 constitution man has ever known and the greatest book which is the Holy Quran.

That is the message delivered by Prophet Muhammad (peace be upon him).

We note that his enemies launched both types of war –physical and verbal- against him. He repelled such aggression

constitution man has ever known and the greatest book which is the Holy Quran.

That is the message delivered by Prophet Muhammad (peace be upon him).

We note that his enemies launched both types of war –physical and verbal- against him. He repelled such aggression

by clear evidence and argument on the one hand and sword and spear.

In the initial period of his messenger ship, Allah commanded the Prophet to confine himself to a struggle that used

the holy Quran as its only weapon:

“Do not obey the disbelievers, but strive most vigorously against them with this holy Quran.” (25:52) Allah, Mighty

He says “Whenever they come to you with an argument, we shall reveal to you the truth and the best explanation.”

(25:33). The prophet answered all the arguments his enemies raised and was always ready to state the clear truth.

With every attack aimed at Islam and its beliefs and principles,

Muslim scholars exerted good efforts in responding to enemy accusations. They refuted their arguments, showed the

fallacy of their evidence, stated the truth, and cited its proofs based on logical reasoning and Islamic texts.

continuous validity, flexibility, and suitability for all generations.

Yet doubts continue to be raised about the holy Quran,

Prophet Muhammad, and the divine law. A careful observer cannot fail to recognize that clouds continue to gather in

an overcast sky. The whole atmosphere is that of a rough sea with successive high waves of doubt that reach the ships

at bay. Some stay steady, some shake violently and others are overpowered and soon sink into the deep.

Such waves are merely a new form of the verbal onslaught. They need a suitable coat of protective mail. The person

who fails to so equip himself with such a shield leaves himself vulnerable to targeted arrows.

How people are influenced by contemporary Misconceptions?

Type One: External influences for the holy Quran

everyone knows that there is much good, benefit, exchange of knowledge, and mutual care that is done through

social media, but such are also the principal mediums for transmitting misconceptions and problems.

They have also helped put the misconceptions of old times in front of those easily influenced by dubious ideas.

Social media provide easy mediums to those who want to spread misconceptions, without going through difficult and

Television and books rarely have the same appeal to young people, such as films and novels.

This tends to broaden the population group that is influenced by the latter.

The problem here is that their influence is indirect, as they present a totally alien culture, with all that it involves of

right and wrong, good and evil.

3- Availability of what is desirable yet forbidden

the problem with temptation in our times is that it has taken on different manifestations and attained several stages,

one stage leading to the next. It can, thus, easily become predominant within a young person’s mind and emotional

4- Frequent indulgence in sin without following it with repentance and a resolve not to revert to it leads to making one’s heart rusty, and when such rust accumulates, one cannot see the truth. This is as Allah says in the Holy Quran:

“Their own deeds have cast a layer of rust over their hearts.” (83:14). If barriers gather around one’s heart, the light

of faith becomes dim and a person is likely to be influenced by even casual doubt or a flimsy misconception.

An authentic hadith related by al-Tirmidhi and others quotes the prophet as saying: “When a person sins, a black

spot settles on his heart. If he regrets it and turns to Allah in repentance, his heart is cleared.

If he repeats it, the black spot increases until eventually, it covers all his heart. This is the rust Allah mentions as He

says: “Their own deeds have cast a layer of rust over their hearts.”

community. On its own, this factor is not strong unless coupled with a sense of defeatism among Muslims.

In al-Muqaddimah, Ibn Khaldun stated a maxim that became world-famous. This concerns the influence of the

victor over the vanquished. I may summarise it as follows: The vanquished will always try to emulate the victor in his

dress, transport, and weapons and how to make and use these.

them is superior to the other, the weaker one will import much of the stranger’s habits and practices.

Muslims also agree that delaying prayers until their time range has lapsed is one of the most serious sins. The

question that arises is: How do we explain the fact that a substantial number of Muslims neglect to offer their

obligatory prayers on time. I claim that lack of certainty of belief is paramount, even though there are other reasons.

Psychological problems or some pressure leads a person to be displeased with their lot or unhappy with Allah’s will.

In the Quran, Allah tells us of people who worship Him but then revert to disbelief as a result of some misfortune

that befalls them. He says “Some people worship Allah on the border-line of faith. If good befalls such a person, he is

content; but if a trial assails him, he turns away utterly; thus losing this world and the life to come. This is, indeed, a

Ibn Abbas is quoted in al-Bukhari’s Sahih interpreting this verse as follows:

“A man may come to Madinah. Then if his wife gives birth to a son and his horse gives him a calf, he says: “This is

“This religion is bad”. Ibn Saadi, a fine commentator on the holy Quran, gives the following interpretation of this

“some people are weak in faith: it has not settled in their hearts and they have not experienced its happy feelings.

They might have embraced it out of fear, or through the force of habit. Therefore, it is shaken by trials. “If good

This means that if he continues to have ample provisions and does not experience any adversity,

The Quran is the first source of legislation from which theology, juristic rulings, and ethics

The Quran is the first source of legislation from which theology, juristic rulings, and ethics are taken along with the

the second source of legislation is the Sunnah

In brief, the holy Quran is a personal letter from God, to mankind, providing guidelines to follow, to provide the best

life in this lifetime, and to achieve the best of the afterlife.

If you were to open the Qur’an and read from any point, you will learn something valuable that will have a profound

effect on your outlook on life.

God provides you with wisdom to make you transform yourself into a better person and one who is loved by God.