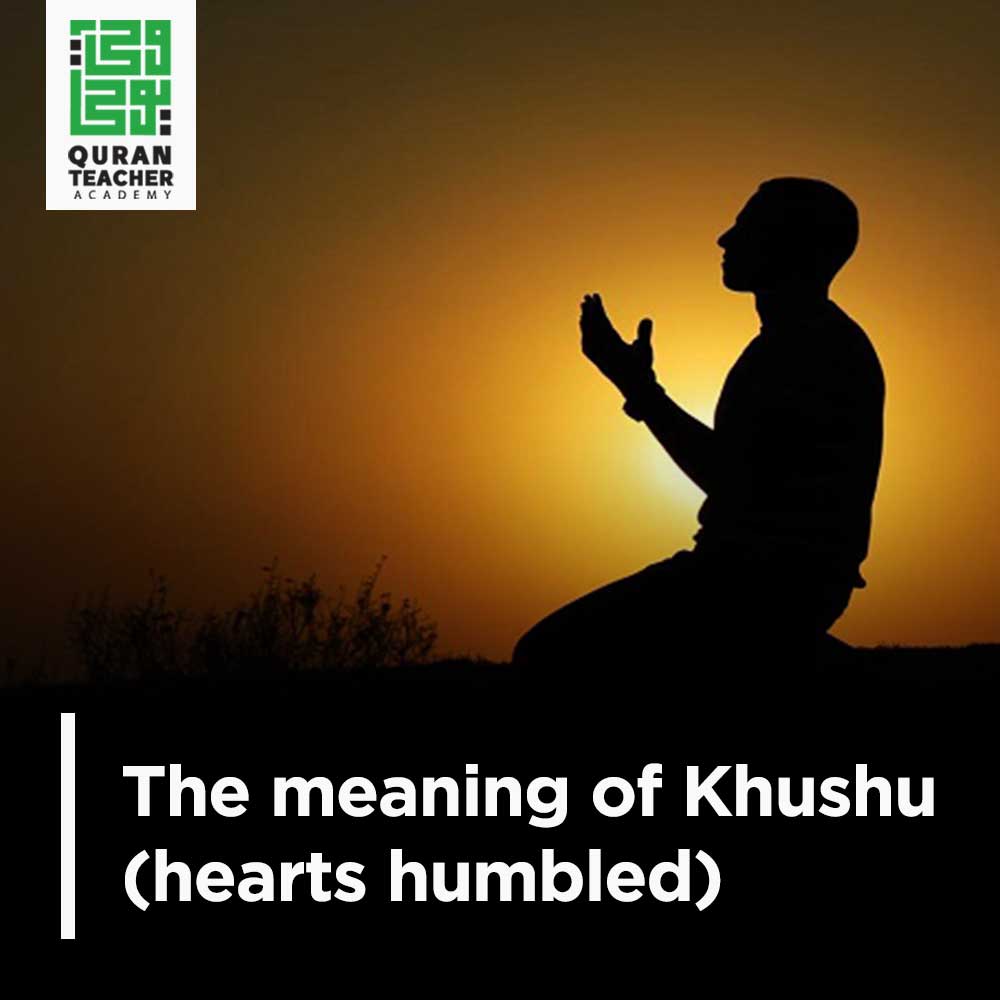 The basic meaning of Khushu’ in Islam is the softness of the heart, it's being gentle, still, submissive,

“Both legal and illegal things are evident but in between,

The basic meaning of Khushu’ in Islam is the softness of the heart, it’s being gentle, still, submissive,

“Both legal and illegal things are evident but in between,

there are doubtful (suspicious) things and most of the people have no knowledge about them.

So whoever saves himself from these suspicious things saves his religion and his honor. And

to get in it. (O people!) Beware! Every king has a Hima and the Hima of Allah on the earth is His

illegal (forbidden) things. Beware! There is a piece of flesh in the body if it becomes good (reformed)

When the heart is humble, so also the hearing, seeing, head, and face, indeed, all the limbs and their

actions are humbled, even speech. This is why the prophet صلى الله عليه وسلم would say in his bowing

(Ruku’), “My Sight and hearing and marrow are humbled to You.” Another narration, “and whatever

my foot carries” One of the Salaf saw a man fidgeting in prayer, he said “If the heart of this person

was humble, so too would his limbs are.”

“They who are during their prayer humbly intent.”

This verse according to Islamic scholars refers to:

The one whose heart is in humility, his shoulder is softening, and he doesn’t look here and therein

Those who offer their Salat (prayers) with all solemnity and full submissiveness.

Those who are fearful and still.

Mujahid said: “The foundation of Khushu’ (hearts humbled) is in the heart and quietude in prayer.”

Al-Khurasani said: “Khushu’: refers to the hearts humbled of the heart and the subservience of the

Zuhri said: “It is the quietude of the servant in his prayer.

Qatada said: “Khushu’ of the heart the fear and lowering the gaze in prayer.”

Mujahid(may Allah have mercy on him), said concerning the words of Allah عزوجل “…and they were

to Us humbly submissive.”: 90  being humble and Modest.

Allah عزوجل has described the earth as in Khushu’ in His words:

“And of His signs is that you see the earth stilled, but when We send down upon it rain, it quivers

and grows.” Surah Fussilat: 39 Its bareness and stillness have been removed in its place vegetation

It was Khushu’s, stillness, lowness, and lack of growth. The same to the hearts, their desires, and

thoughts arising from the following of carnal lusts are laid to rest and it submits to Allahعزوجل.

Khushu’ replaces the heart’s haughtiness and arrogance. When Khushu’ settles in the heart, organs,

and motions even the voice is still.

“And [all] voices will be stilled before the Most Merciful, so you will not hear except a whisper [of

footsteps].” The source of Khushu’

It is in accordance to the hearts humble witnessing the attributes of Allah that lead to Khushu’.

Some hearts are humbled by the strength of their perceiving Allah’s closeness to His servants, and His seeing

their secrets which lead to being shy of Him عزوجل.

Some hearts are humbled by:

they’re perceiving the magnificence of Allahعزوجل, His greatness which leads to being in awe of Him

and magnifying Him Only.

they’re perceiving the enormity Of His vengeance and punishment which leads them to fear Him.

10 ways to attain Khushu’ in your Salah

“Certainly will the believers have succeeded: They who are during their prayer humbly Intent.” Al-

1- Pay attention to the Quran you are reciting in Salah: Try to understand the meaning of the part

2- Empty out your mind and heart before you start.

3- Seek refuge in Allahعزوجل from satan before and during Salah.

full in every prayer cycle rakah)

6- Remember Death before and during Salah.

“Young man, I will teach you some words. Be mindful of God, and He will take care of you. Be

mindful of Him, and you shall find Him at your side. If you ask, ask of God. If you need help, seek it

from God. Know that if the whole world were to gather together in order to help you, they would not

be able to help you except if God had written so.

And if the whole world were to gather together in order to harm you, they would not harm you

except if God had written so.” Related by Tirmidhi

8- Take your time in Salah.

9- Read different Surahs and Du’as so as not to be repetitive. Just to have the opportunity to have a

10- Stay a little bit after you pray for Zikr. Learn praise the Quality and attributes of Allahعزوجل.

Allah’s Messenger (ﷺ) entered the mosque and a person followed him. The man prayed and went to

the Prophet and greeted him. The Prophet (ﷺ) returned the greeting and said to him, “Go back and

pray, for you have not prayed.”

The man went back prayed in the same way as before, returned and greeted the Prophet who said,

“Go back and pray, for you have not prayed.” This happened thrice. The man said, “By Him Who

sent you with the Truth, I cannot offer the prayer in a better way than this. Please, teach me how to

pray.” The Prophet (ﷺ) said, “When you stand for Prayer says Takbir and then recite from the Holy

Qur’an (of what you know by heart) and then bow till you feel at ease. Then raise your head and

stand up straight, then prostrate till you feel at ease during your prostration, then sit

with calmness till you feel at ease (do not hurry) and do the same in all your prayers.”

“So is one whose breast Allah has expanded to [accept] Islam and he is upon [i.e., guided by] a light

[like one whose heart rejects it]? Then woe to those whose hearts are hardened against the

remembrance of Allah. Those are in manifest error. Allah has sent down the best statement: a

consistent Book wherein is reiteration. The skins shiver therefrom of those who fear their Lord; then

their skins and their hearts humbled to relax at the remembrance [i.e., mention] of Allah. That is the

guidance of Allah by which He guides whom He wills.”

“When the verses of the Most Merciful were recited to them, they fell in prostration and weeping.”

“And they fall upon their faces weeping, and it [i.e., the Qur’an] increases them in heart humble

1- Learn From The Comfort Of Your Home Or At Work – Only A Mic, PC, And Internet  Required.