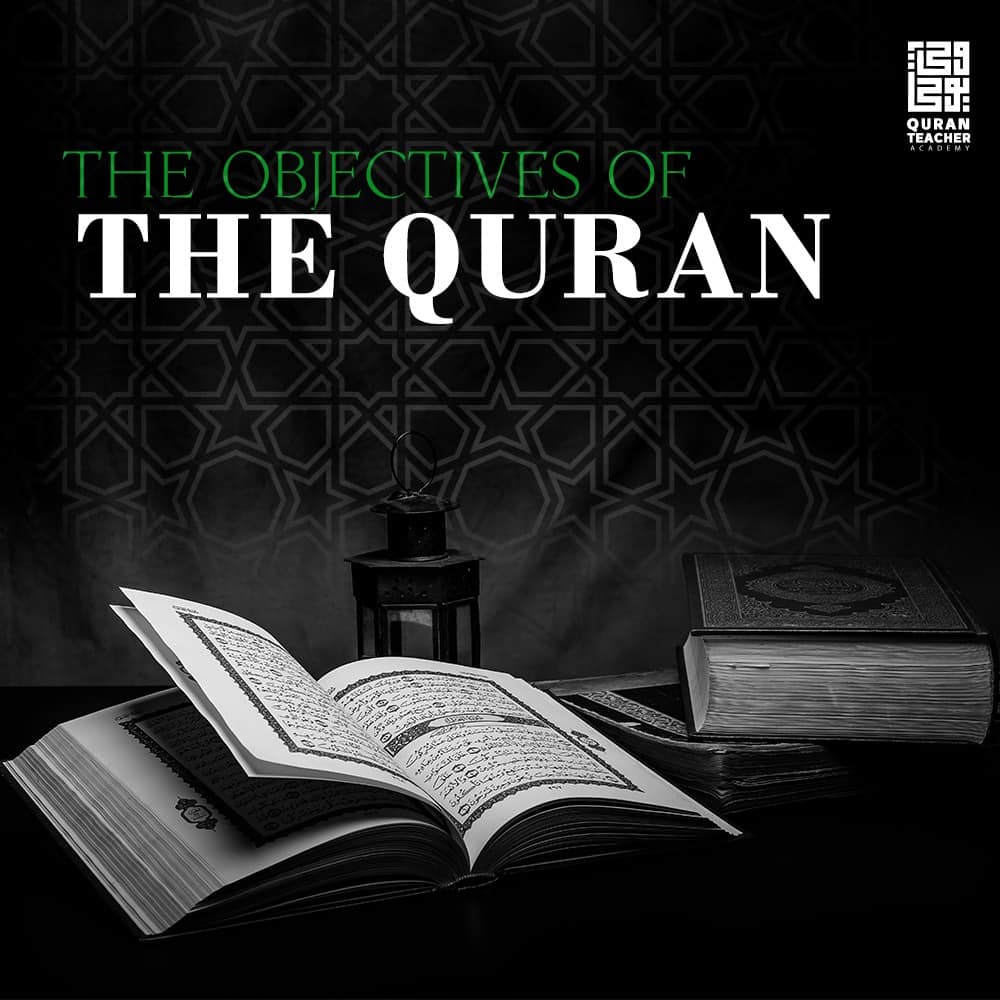 The objectives of the Quran

encompasses all of the sciences of the Quran within it, including praise of Allah and singling Him in this, singling Allah in worship, the existence of commands and prohibitions, and promise and threat. And the Ayat in the Quran is not free from any of these topics.

“The purpose of the Quran as a whole is to assert four genres: the divinity of Allah, resurrection, prophethood, and the affirmation of divine pre-decree. The statement, (All the praises and thanks be to Allah, the lord of all creation) gives the message of lordship. And the statement (The Owner of the Day of Recompense) negates the idea of al-jabr (lack of free will for humans in the dunya) and affirms the message of resurrection and divine pre-decree.

And the statement, (Guide us to the straight path) to the end of the surah affirms the message of divine pre-decree again but also of prophethood.

are all present in surah al-Fatihah, and these categories are the primary objective of the message of the Quran.”
This surah includes matters that are relevant to the practical aspects of the creed which are intended to be contemplated upon, as well as matters that are relevant to the acts of worship—both of which direct to the straight path, and guide to the ranks of the winners (believers) and highlights the end of the losers (disbelievers).

“This surah has four sciences within it which act as the symbols of the whole religion:

The knowledge of ‘aqidah’ relates to knowing Allah Almighty and His Attributes, which is eluded to in His statement: “Lord of all creation. The Most Beneficent, the Most Merciful.” Aqidah also includes knowledge of the resurrection, and this is referred to in the statement: “The Owner of the Day of Recompense.”

The knowledge of actions and the foundation of this is al-ibad (acts of worship), and this id is intended by His statement: “You alone we worship.”

The knowledge which brings about perfection, meaning the knowledge of ethics and mannerisms. The ultimate fruit of this knowledge is being constantly conscious of Allah’s presence, resorting to Him in all affairs, knowing He is the one and only God and embarking upon the straight path. This is alluded to in His statement: “And You alone we ask for help. Guide us to the straight path.”

The knowledge of those who came before: stories of previous nations and generations which have passed. Those who were successful from them and those who were wretched, and the respective recompense is given to each one of those parties. This is the purport of the statement of the Highest: “The way those on whom You have bestowed Your Grace, not of those who earned Your anger, nor of those who went astray.”

The objectives of the Quran are six; three of them are essential with the other three causing perfection:

A definition of the deity which is supplicated to and worshipped. This is found in the very beginning of Surah al-Fatihah.

A definition as to what the correct path is and is explained explicitly in Surah al-Fatihah.

A description of the state of return to Him, the Highest. This is explicitly referred to in His statement: “The Owner of the Day of Recompense.”

The other three objectives of Quran :

A description is given to the obedient, as He referred to them in the statement:

“The Way of those upon whom You have bestowed Your Grace.”

A description is given to the stubbornly disobedient, as He referred to them in the statement:

“Not the way of those who earned Your anger, nor of those who went astray.”
A description given to the path towards Allah, He referred to this in the statement: “You alone we worship, and You alone we ask for help.”

On the Excellence of Knowledge and reading Quran

“Are those who know equal to those who do not know?” Only they will remember [who are] people of understanding.”Az-Zumar: 9

“Allah will raise those who have believed among you and those who were given knowledge, by degrees. And Allah is Aware of what you do.” Al-Mujādalah: 11

That the Messenger of Allah (ﷺ) said:

“For whoever Allah wants good, he gives him understanding in the religion.

Reading and reciting the Quran is an act of worship like all other acts of worship, and it is from the remembrance of the Dhikr that the reader is rewarded for reciting it.

That is why the Messenger of Allaah, may Allaah’s prayers and peace be upon him, urged us to recite it and indicated to us his great reward.

The frequent reading of the Quran among the Muslims

who enjoy reading it with pleasure in his recitation leads to psychological comfort and reassurance in the heart. Allah said in Surat Al-Ra’d verse 28”:

By repeating the reading with pleasure, the reader will try to understand what he is reading from the Qur’an with awareness and insight.

If he understands what he is reading with awareness and insight, then there is no doubt that he will enter into the niche of reflection and contemplation, and begin to contemplate the verses of God in the Qur’an and then act according to it with knowledge, awareness, and insight.