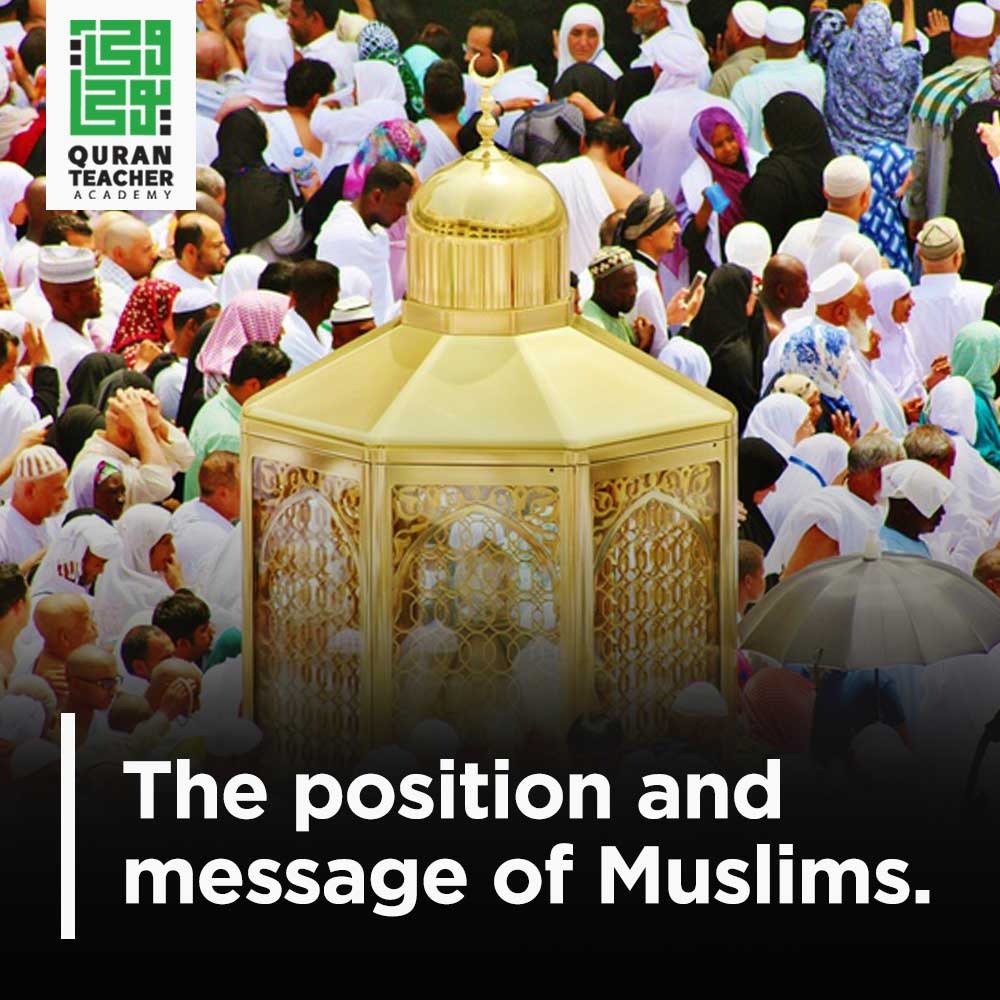 alone. The Arabs were in extreme poverty. Their food usually consisted of dates, the flesh of camel,

and barley bread. Their dress was of coarse material and their houses were of mud or bare tents.

They lived in the extreme cold and suffered badly from climatic rigouts. The Quran speaks of their

misery in the following passage which identifies their lack of resources and destitution.

“And remember when you were few and oppressed in the land, fearing that people might abduct

In contrast, The Romans and Persians were in luxury and affluence. They were the symbols of

sophistication and improvement for the world and enjoyed a flourishing culture and civilization.

They ruled over the world. The east was under Persian hegemony and the west was under Roman’s.

Their dominance was massive.

Against this all-around darkness, the Quran threw out a challenge to both superpowers. It infused a

new lease of life into the Arabs, assuring them:

By way of comfort and consolation for the leader of Muslim community, the Prophet صلى الله عليه وسلم,

Surah Yusuf was sent down. The Surah opens thus:

“Certainly were there in Joseph and his Brethren signs for those who ask,” Surah Yusuf: 7

More important in the Surah’s conclusion:

“[They continued] until, when the messengers despaired and were certain that they had been

denied, there came to them Our victory, and whoever We willed was saved. And Our punishment

cannot be repelled from the people who are criminals. There was certainly in their stories a lesson

for those of understanding. Never was it [i.e., the Qur’an] a narration invented, but a confirmation

In the following passage from Surah AL-Qasas, it changed the scene, putting an end to injustice and

“We recite to you from the news of Moses and Pharaoh in truth for a people who believe. Indeed,

Pharaoh exalted himself in the land and made its people into factions, oppressing a sector among

them, slaughtering their [newborn] sons, and keeping their females alive. Indeed, he was of the

corrupters. And We wanted to confer favor upon those who were oppressed in the land and make

them leaders and make them inheritors. And establish them in the land and show Pharaoh and his

minister and their soldiers through them that which they had feared.” Surah Al-Qasas: 3-6

formidable community. Even the most insightful person couldn’t predict such a turn of events.

No one could assure that they would ever be superior.

The Quran tells us the hollowness of these empires thus:

“And when you look at them, their bodies please you; and when they speak, you listen to their

words. They are blocks of wood propped up.” Surah Al-Munafiqun: 4

These believing Arabs, by taking great pride in faith, Islam, destroyed that superpower of the

The whole world was awestruck by their bravery, their commitment to Islam, and their chivalry.

1- They emerged not only as conquerors but also as the saviours of mankind.

2- Their aim was to liberate mankind from the injustice, oppression which had been for centuries.

fellow human beings the rulers, they accomplished their mission.

4- They advised people to put an end to the abuse of anyone.

Worldly power and glory didn’t dampen their spirit. They regarded the contemporary rulers, as

mighty emperors, no more than puppets.

5-They had no difficulty therefore in crushing them. Nor were they frighten by such a huge enemy

For they knew that the unbelievers lacked essential faith and moral values that motivate warriors.

Without believing in Allah, man is no better than an animal, rather he is a beast.

emboldened and inspirited them.

6-They hold a new message which boosted their self-confidence and pride, self-

1- They were energized in a way that they conquered the entire world.

2-Their objectives were to guide humanity from being lost in the darkness of error.

3- They wanted everyone to enjoy peace, justice, and equality as the call of Islam.

Today, there are more than fifty Muslim countries. We must enjoy greater pride and Bravery than

the Arabs of early Islam.

However, we need to remind ourselves of the Qur’an promise:

Qasas: 139 When this verse was sent down, the Arabs didn’t have any place.

Are Muslims today not fit enough to receive the same Qur’an honor?

Faith is the major asset of Muslims

On the day of the battle of Badr, the Prophet صلى الله عليه وسلم said this comment:

O, Allah! If you let this believer perish, no one will worship You on the face of the earth until the last

The Prophet realized the need for repentance. Allah had blessed Prophet Muhammad with special

intelligence. He was bestowed with discerning abilities.

At the battle of Badr, only three hundred and thirteen Muslims were pitted against a well-equipped

consists of a one thousand-strong army.

By standard, such a numerically disadvantaged group could not overpower its

The Prophet (ﷺ) however, turned to Allah with hope and fear and supplicated: “O Allah! If you let

this handful of believers perish, no one will worship you until the Last Day.”

Allah will help and support us. He will protect us and care of us if we take pride in Islam and pledge

ourselves fully to faith.

Allah has promised this for Muslims, He said:

“O you who have believed, if you support Allah, He will support you and plant firmly your feet.”

The importance of learning Sharia Sciences for Muslims:

it, just as He made clear that whoever God wants good for him, then he gives him an understanding

of the religion, “Allah makes the way to Jannah easy for him who treads the path in search of

Religious scholars are the heirs of the prophets for Muslims :

Because correcting mistakes takes precedence over memorizing the Qur’an,

So that It is worth mentioning that (Wahion Youha) is An Online Quran Academy,