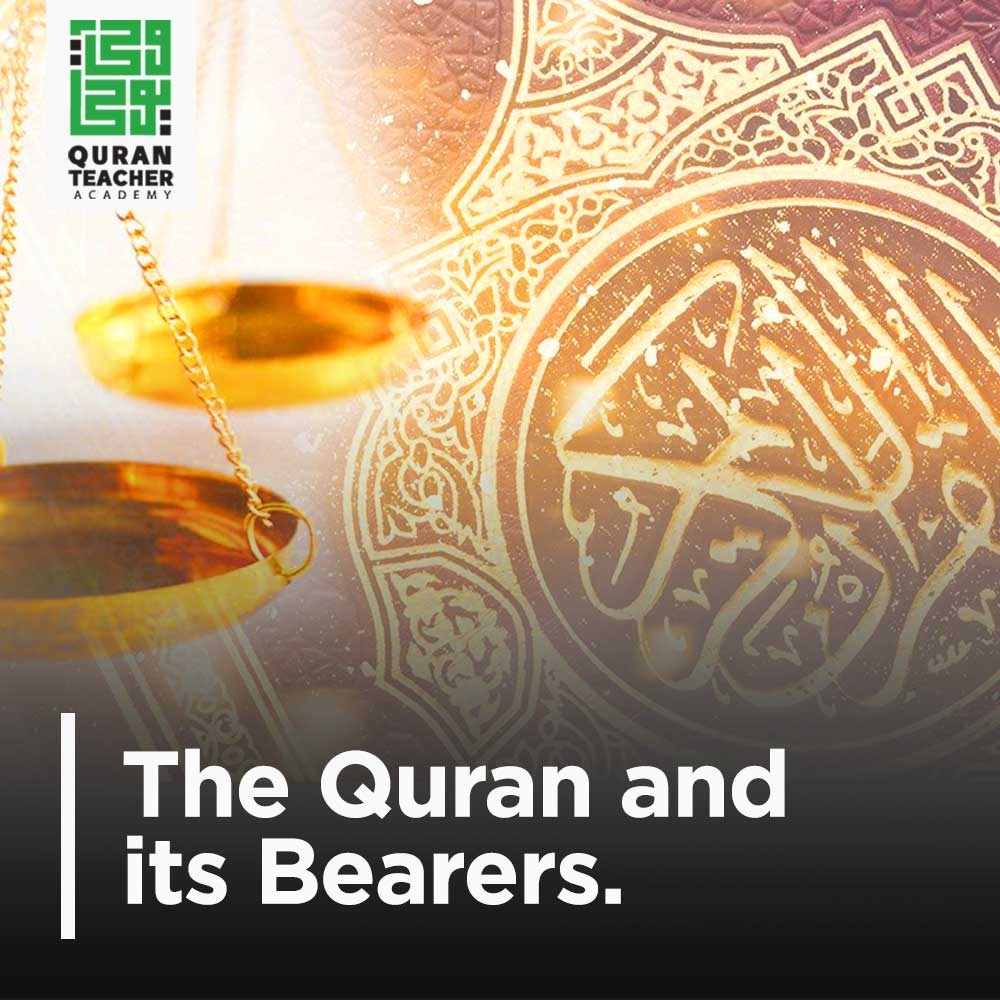 The Quran and its Bearers

The Quran has played two distinct but continuous roles in the lives of Muslims. It has been a guide along with the weary way of this life and into the next, a source of blessing and honor for its bearers here on earth and their intercessor with God on Judgment Day.

the prophet Muhammad said, “The Quran is right guidance from error and light against blindness. It is supported against stumbling, a source of illumination against sorrow and protection against perdition. It is the criterion of truth against sedition and the best way to lead from this world to the next. No one turns away from the Quran but that he turns toward the Fire”

The Quran has played two distinct but continuous roles in .........

The Quran has played two distinct but continuous roles in the lives of Muslims. It has been a guide along with the weary way of this life and into the next, a source of blessing and honor for its bearers here on earth and their intercessor with God on Judgment Day.

the prophet Muhammad said, “The Quran is right guidance from error and light against blindness. It is supported against stumbling, a source of illumination against sorrow and protection against perdition. It is the criterion of truth against sedition and the best way to lead from this world to the next. No one turns away from the Quran but that he turns toward the Fire”

the Quran is a book of guidance. The Quran itself is a source of sanctity and blessing not only for those who occupy themselves in reciting and studying it but also for all the world and its great history.

Ibn Kathir observes, “The Quran began to be sent down in a noble place, the sacred city of Mecca, and also in a noble time, the month of Ramadan. Thus it combined the nobility of space and time”

Yet the holy Quran possesses a numinous quality that renders its power beyond the capacity of hard mountains to bear.

This idea is clearly stated in the Quran:

“Were we to cause this Quran to descend upon a mountain, you would see it humbled, torn asunder in awe of God” This numinous power, however, is not only a negative force of destruction; it is also a positive source of healing and tranquility.

Several traditions tell how one of the companions of the prophet, Usayd ibn Hudayr, witnessed unusual portents when he recited the Quran in the night. It is reported that he came to the prophet one day saying, “As I was reciting a surah of the Quran last night, I heard when I came to its end noise so that I thought that my horse was being spurred on in fright. I then looked back and saw something like lamps between heaven and earth. I could not go on reciting.”

The prophet then said, “These were angels, descended to hear the recitation of the Quran. Had you gone on, you would have seen wonders”

The divine tranquility have descended upon a man, as he was reciting the surah of the Cave, as a white cloud (Ibn Kathir P.474)

“Abu Hurairah (May Allah be pleased with him) reported:

The Messenger of Allah (ﷺ) said, “Any group of people that assemble in one of the Houses of Allah to recite the Book of Allah, learning and teaching it, tranquility will descend upon them, mercy will engulf them, angels will surround them and Allah will make mention of them to those (the angels) in His proximity.”

The Quran is a heavy word

In one of the earliest surahs of the Quran the Prophet Muhammad addressed with the words, “Indeed, We will cast upon you a heavy word.” Surah Al-Muzzammil: 5

Therefore, the Quran has been regarded as a great burden, and those who recite, study, and teach it are known as the bearers (Ramallah) of the holy Quran. This great charge is, however, equal to the honor and the reward of its bearers.

Qurtubi describes them as follows:

“They are the bearers of the hidden mysteries of God and keepers of His treasured knowledge. are the successors (Khulafa) of His prophets and His trustees. They are his people and the elect of His creatures.” Qurtubi then cites a tradition in which the prophet declares the people of the Quran to be the people of God and His elec.

Their occupation is considered to be more excellent in the eyes of God than any other form of devotion. Thus in a hadith Qudsi (divine utterance) related from the prophet on the authority of Abu Sa’id al-Khudri, God is said to have declared: “He who is occupied with the Quran and with the remembrance of me from prayers to me for his needs, to him will I give the best of that which I grant to those who pray”

The prophet’s life, sayings, and actions (Sunnah) have served as a model of devotion and moral conduct for Muslims of all times because the prophet’s moral and spiritual character was formed and impressed by the Quran. This prophetic character remains the ideal goal for the pious, but it is one in which the ‘people of the Quran’ (that is, those who occupy themselves in reciting and studying it) have a special share from his sunnah.

Muslim piety has endued the Quran with a living and dynamic personality. The Quran is power against the arrogant tyrants of this world, a guide and protection for the pious, and their intercessor from all evil, in this life and the Day of Judgment.

The reciter of the Quran shares in the status of prophets, those who have been favored with the reception of the divine word. The reciter does not receive the Quran as a revelation as the prophet, yet he assimilates it into his entire being so that he lives in the Quran by heart.

Again the parallel with the idea of the person of faith living in Christ,

who becomes infused into the person’s body through communion, is striking.

The pious ancestors just cited the assertion that “a person of faith who recites the Quran when yet a youth, the Quran

shall be mingled with his flesh and blood”

Three varieties of reciters of the Holy Quran

The fifth Imam Muhammad al-Baqir distinguishes three varieties of reciters,
The first: use the Quran as it were a commodity of trade, seeking by his profession the rewards of kings and other men of wealth and power.

The second: learn the words of the Quran but neglects its precepts and admonitions.
The third: “recites the Quran employing its healing power as a cure for his ailments.
He spends his nights with it and with it he thirsts during his days (that is, in fasting).
He spends his time with it in his places of worship and because of it abandons his bed.”

For the sake of such men, the imam wants on,

“God wards off calamities, for their sake, he protects men from their enemies. For the sake of such men, God sends

down rain from heaven.”

In yet another tradition related to the authority of ‘Ali,

we see that the reciters of the Quran play a direct intercessory role on behalf of humankind.

“God shall resolve to punish all the inhabitants of the earth for their acts of disobedience,

youths learning the Quran, he shall show mercy toward them and mitigate their punishment.”

Because of their high status with God, the bearers of the Quran deserve the love and respect of other men. As

Muslims love and respect the prophet Muhammad’s Quranic attributes have a special place in the hearts of Muslims,

the bearers of the Quran share in this privilege because of their special relationship to the Quran.

The bearers of the Quran must benefit from this great privilege. Their life with Allah must be spent in prayer and thanksgiving.

Of the things that help to memorize the Quran, Reading to an elaborated Quran Teacher,

because correcting mistakes takes precedence over memorizing the Qur’an,

and it is incumbent on the learner of the Quran to realize that he is exposed to mistaken,

and his duty when mistakes occur, to learn the correct way of reading and master

what his sheikh or Quran teacher teaches him.

So that, It’s worth mentioning that (Wahion Youha) is An Online

Academy, Where You can:

1- Learn From The Comfort Of Your Home Or At Work – Only A Mic, PC And Internet Are Required.
2-All Levels And Ages Of Students Are Welcome.
3- You Can Choose Any Teacher, Male Or Female, To Teach You Or Your Kids No Problem In Shaa Allah.
4- They Teach Individuals (1 To 1 Tuition) And Organisations (On Request)

And You Will Find It Difficult To Find More Competitive Lesson Prices On The Internet,

Yet their Quality Of Teachers Is Outstanding