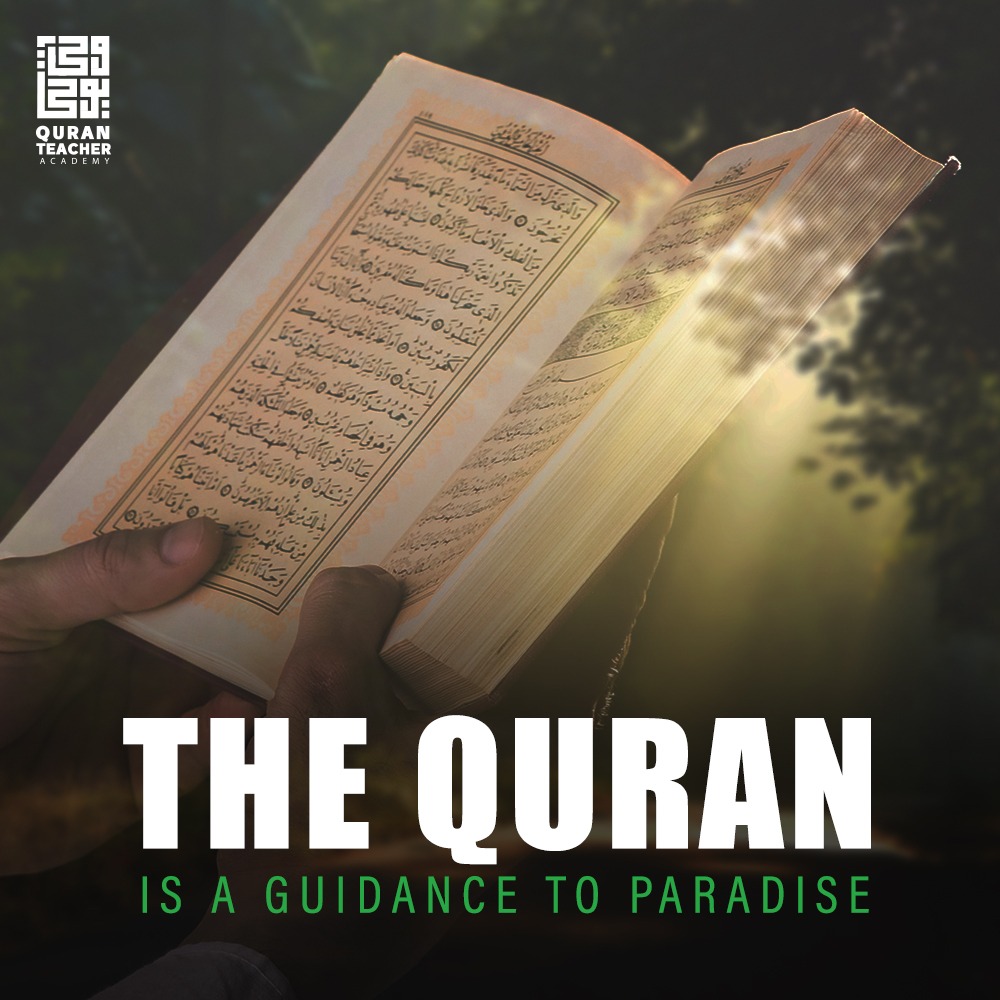 The Quran is a guidance to paradise

The Holy Quran contains the guidance that was sent to humankind by God Most High. We are advised by God Most High in the Quran to refer to the Quran in all cases of dispute. The Quran is the “criterion” for judging the difference between right and wrong.

To practice Islam successfully, all Muslims must gain knowledge of the Quran.

The Quran does not mean knowing only how to recite the Quran.

The Holy Quran contains the guidance that was sent to humankind by God Most High. We are advised by God Most High in the Quran to refer to the Quran in all cases of dispute. The Quran is the “criterion” for judging the difference between right and wrong.

To practice Islam successfully, all Muslims must gain knowledge of the Quran.

The Quran does not mean knowing only how to recite the Quran.

In the Quran, one must also acquire knowledge of the meaning of the Quran.

The disaster of leaving the Quran!

When we go from a place to another, we follow these street signs. If we fail to obey them, we can experience disaster. Just think what can happen if a driver disobeys a red traffic light or a stop sign. He or she can suffer harm, such as become involved in a traffic accident. In order to be properly guided on the road, we have to follow all the signs of the road. Otherwise, we might lose our way. Before we can obey the signs on the way, we must know their meaning or significance. What is a particular sign telling us? We must know, for example, the meaning of green light and the meaning of red light. Green means “proceeding is permitted.” Red means “proceeding is prohibited.”  Orange means “proceeding is permitted but not recommended.”

Still, other kinds of signs are important, sometimes very important. We speak for example of the “vital signs of life.”  These signs indicate whether a person is dead or alive. Among such signs are movements, including eye movement, heartbeat, breathing, and body temperature.  More often than not, signs must be acted upon. When few signs of life are detected in a patient, doctors and nurses must act quickly to save the patient’s life.

The one who ignores an important sign may end up paying a high price for his or her carelessness. Just think of what can happen if a person disobeys a doctor’s order to cut down on the consumption of unhealthy foods. Such a person may suffer a stroke or a heart attack, due to high blood pressure. Having knowledge of signs and obeying them can mean the difference between life and death, between health or lasting injury, between prosperity and penury, between a great destiny and a wretched one.

The alphabet itself consists of a series of signs, the words that represent different people, ideas, or objects. With these ‘signs’ we are able to communicate in writing, using signs, the words we form by putting together various letters of the alphabet.

A sign is a statement relaying a message. It points us in a particular direction. The signs or verses in the Quran point to God Most High.

We are all destined to meet Him. During this meeting, we will have to account for all our deeds, and we will be judged for our faith and actions. In the Quran, we have the most important signs of all, the signs from God Most High.

The Quran as a whole is also a sign. No one can reproduce anything similar to the Quran. This is why the Quran is described as inimitable. It is nothing less than a miracle. But the signs of God most High are to be found outside of the Quran as well.

The signs in the Quran are very important because they direct us; they show us the way, the straightway.

It is up to us to take note of and obey those signs. Anyone who disregards them does so at his or her own risk. Together the verses in the  Quran constitute guidance in a written form,  a  set of rules, now recorded in writing,  so that all who can read may refer to them. In order to obtain guidance we have to give up sin, repent and acquire knowledge of the signs, the verses in the Quran

Paradise is by following the signs of the Quran

The significance of the Quranic signs

The significance or meaning of the Quranic signs lies in that they point us in the right direction and guide us. The safety and success of our life’s journey depend on whether we heed the meaning or significance of those signs. The heedful is successful; the heedless lose.

All the signs (verses) in the Quran have a beneficial effect on all those who get to know, accept, and apply their meaning in their lives. The signs in the Quran can change a life – for the better.  Countless numbers of Muslims have benefited from applying in their lives the guidance contained in the Quran. IT is the Book from the highest authority, God Most High. The Quran is a precious gift from God Most High to Muhammad, peace, and blessings be on him, and to humanity.

It is good to know the historical background or the occasion for the revelation of each verse or group of verses.

Types of verses in the Quran

The Quran informs us that there are two types of verses: clear and fundamental verses on the one hand, and metaphorical on the other.

It follows that not all the verses in it can be taken literally. The great majority of the verses can be taken literally, but not all.  One challenge in reading it is to know which verses can be taken literally and which verses are metaphorical.  God  Most  High  Himself advises us to focus on the clear and fundamental verses, which constitute the core of it. It is easier to know the meaning of the clear and fundamental verses than the meaning of metaphorical verses. Here are degrees of knowledge. We have Bachelor’s, Master’s, and Doctoral degrees, and to each of these degrees corresponds – hopefully – a progressively higher degree of knowledge.

Even Prophet Muhammad, peace and blessings are on him, did not have knowledge of when the “Hour” (the Day of Judgment) was to come

The  Quran  is  thus  largely  an exoteric  book,  meaning  a  book that “makes  things  plain,”  a book that leads people “from darkness to light.”