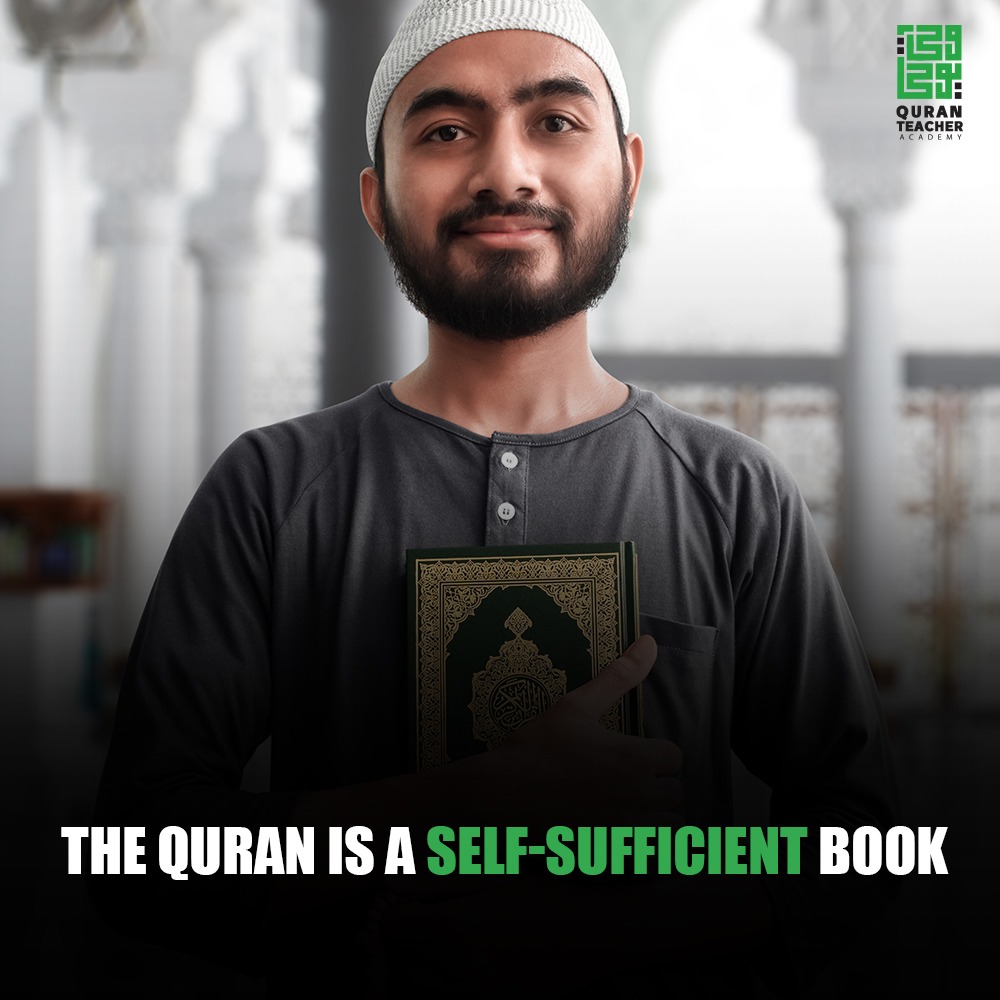 The Quran is a self-sufficient Book The great scholars, the master of reciters in Madina (may Allah protect them) When people ask a lot of people about how to memorize the Quran when it comes to these great people who have spent sixty to seventy years reciting and teaching The Quran and their whole lives were spent on teaching The Quran, when asking them about the best way to memorize The Quran, they say that .........
The Quran is a self-sufficient Book

The great scholars, the master of reciters in Madina (may Allah protect them)

were spent on teaching The Quran, when asking them about the best way to memorize The Quran,

they say that the best way to memorize The Quran they replied by The Prophet’s advice,

“Read the Qur’an regularly. By the One in Whose Hand Muhammad’s soul is, it escapes from

memory faster than a camel does from its tying ropes.” (read The Quran regularly)

It’s simple, we argue so much but at last, we go back to the Prophet’s adviceصلى الله عليه وسلم (Read The

‘A’isha reported God’s Messengerصلى الله عليه وسلم as saying, “The acts most pleasing to God are those

which are done most continuously, even if they amount to little.”

You should have a daily part of The Quran like what you do with food and drink, like a routine you

mustn’t give up on it even if it is little, and with time, this little part will increase Insha’Allah.

Until you reach a stage when Allahعزوجل honors you, you should make Du’a day and night in the

prostration: “Oh Allah makes the great Quran be the spring of my heart, the light in my chest, Help

me Allah against my evil soul.”

Allah chooses those who are worthy to be closer to Him, Allah must see your desire that you need to

be of the people of The Quran.

Ask Allahعزوجل to honor you to be skilled in The Quran, if you take a daily part, Allahعزوجل will

grant you success to be skilled in The Quran, paths will be open for you.

“And We have certainly made the Qur’an easy for remembrance, so is there any who will

Musa عليه السلام is unique among the messengers of Allah, he got to engage in regular and engaging

conversation with Allah. “And Allah spoke to Moses with [direct] speech.” Surah An-nisa: 164

Allah engaged in lots of conversations back. Allah would initiate a lot of that conversation and he

would engage in it as they would have a lot of exchange. This is a beautiful thing between him and

Allah that is special. But you know, he got to speak to Allah so much but he never got to see Him

سبحانه وتعالى. And obviously among the human beings what a great honor up until this point that no

messenger has received that you actually get to speak directly to Allah, personally.

So the desire came that: “I just want to see you.” So he talked to Him for so long he says, “My Lord,

show me [Yourself] that I may look at You.”

“[Allah] said, “You will not see Me, but look at the mountain; if it should remain in place, then you

will see Me.” But when his Lord appeared to the mountain, He rendered it level,[402] and Moses fell

unconscious. And when he awoke, he said, “Exalted are You! I have repented to You, and I am the

first [among my people] of the believers.”

When His master manifested some of His glory to the mountain, the glory itself made it explode.

Musa fell unconscious. When he woke up he said: “How far above that you are. I repent, I’m sorry

for what I said. I’m the first to believe. In other words, this wasn’t about I don’t believe but, O Allah I

knew I crossed the line.

“Take what I have given you and be among the grateful”

We get to hear it. We get to read descriptions on it but we don’t get to see it.

And for some people they say, I want to believe but I have particular requirements myself, I will only

believe when I see, if only I can see a Jinn or if you Muslims can show me something from the

Unseen. It’s actually called the Unseen for a reason”.

Allah made it Unseen for that reason. It’s part of our faith to believe in the Unseen.

Unseen”. And some say even though Musaعليه السلام had good intentions, he had been speaking to

Allah for so long, he was longing to see Him. Other people don’t have such good intentions. They

say: “Well, I will be convinced if I see Him, I will believe it once I see Him.”

So Allah told Musa: “O Moses, I have chosen you over the people with My messages and My words

[to you]. So take what I have given you and be among the grateful.”

Look at what Allah said to him: “Take what I have given you”

Now imagine when it applied to us. Allah has given us The Quran!

If you think The Quran is not enough for you to develop your faith and you need something greater,

You actually haven’t grabbed on to The Quran yet, because if you experienced this Holy Book and

really engaged in this Book, you would know that there is nothing more to ask for.

How can I ask for more than Allah’s word!

Another place in the Quran, Allahعزوجلsays:

“And is it not sufficient for them that We revealed to you the Book [i.e., the Qur’an] which is recited

to them? Indeed in that is a mercy and reminder for a people who believe.”

Allah put it in this way, isn’t it enough for them? Because they asked the messenger صلى الله عليه وسلم:

If you have a weak Eman (faith), and you’re like “How can I strengthen my faith?”

If you have a hard time fighting your temptations and a hard time killing old bad habits, this is a

disease in your chest.

“O mankind, there has come to you instruction from your Lord and healing for what is in the breasts

and guidance and mercy for the believers.”

The Quran has healing what lies in the chest. You haven’t given it a chance rather you

underestimated its power to change you into something far better than what you are now. The

Quran can transform you completely.

Finally, we Muslims, Allah عزوجل has given us something that we couldn’t ask for more of and if we

spend our lifetime trying to exhaust ourselves understanding the meanings of The Quran, The

wisdom, and The guidance, the council of this book, it’s not going to be exhausted.

When we get a taste of this great Book, and that taste makes you addicted to wanting to learn more

and more and more about The Quran. And that addiction you desire to heal yourself.

3-You Can Choose Any Teacher, Male Or Female, To Teach You Or Your Kids No Problem