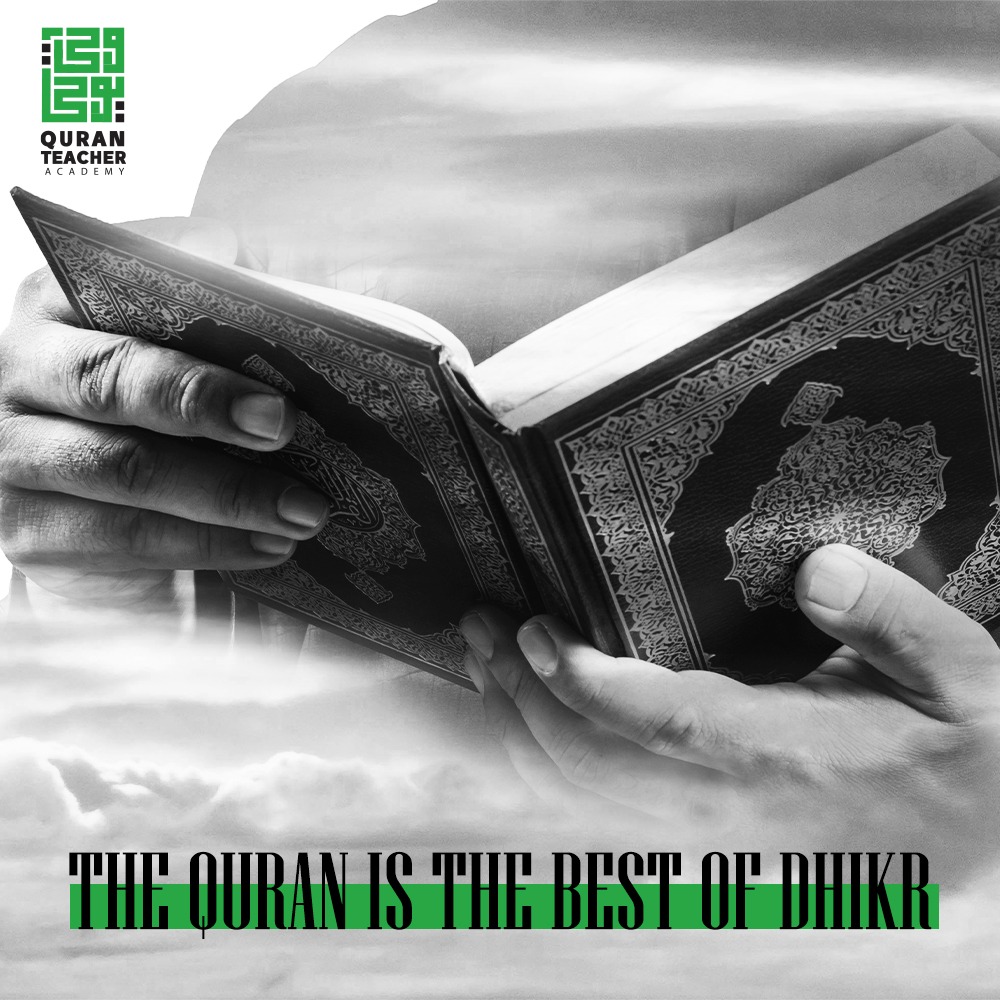 The Messenger of Allah (ﷺ) said, "Whoever recites a letter from the Book of Allah, he will be credited with a good deed, and a good deed gets a ten-fold reward. I do not say that Alif-Lam-Mim is one letter, but Alif is a letter, Lam is a letter and Mim is a letter." [At- Tirmidhi].

By saying: Subhan Allah a hundred times, then one thousand good deeds will be recorded for him or

one thousand sins will be blotted out from his record. [Riyad as Salihin:Book 16, Hadith 24]

The Prophet (ﷺ) passed by a tree with dry leaves, so he struck it with his staff, making the leaves fall.

Then he said: “Indeed, ‘all praise is due to Allah, (Al-Ḥamdulillahh)’ ‘glory to Allah, (Subḥan Allah)’

‘none has the right to be worshipped by Allah, (La Ilaha Illallah)’ and ‘Allah is the greatest (Allahu

Akbar)’ cause the sins to fall from the worshipper, just as the leaves of this tree fall.”

(Al-Hamdu lillah), revolves around the Throne, buzzing like bees, reminding of the one who said it.

Wouldn’t any one of you like to have, or continue to have, something that reminds of him (in the

Allah), and the best of supplication (duaa) is Alhamdullilah (praise be to Allah).”

Allāh, wa biḥamdih)’ a hundred times, none shall bring better than him on the Day of Judgment

except one who did the same as him, or increased upon it.”

“(The following are) two words (sentences or utterances) that are very easy for the tongue to say,

and very heavy in the balance (of reward), and most beloved to the Gracious Almighty (Allah).”

It was narrated that Abu Musa said:

“The Prophet (saas) heard me saying: ‘La hawla wa la quwwata illa billah (there is no power and no

strength except with Allah).’ He said: ‘O ‘Abdullah bin Qais! Shall I not tell you of a word which is

one of the treasures of Paradise?’ I said: ‘Yes, O Messenger of Allah.’ He said: ‘Say: La hawla wa la

quwwata illa billah (There is no power and no strength except with Allah).'”

6- Sall Allahu Alayhi was Sallam (may peace be upon him), Allahumma salli wa Sallam alaa

“The Messenger of Allah (ﷺ) said:

“Whoever sends salah upon me once, Allah (SWT) will send salah upon him tenfold and will erase

ten sins from him, and will raise him ten degrees in status.”

None has the right to be worshipped but Allah alone, Who has no partner.

His is the dominion and He is the praise, and He is Able to do all things. Ten times will have the

the reward for freeing four slaves from the Children of Isma’il.

Muslims realize that Islam is a way of life with the Quran.

The demands, expectations, and benefits of being Muslim stem greatly from our ability to worship

Allah, obey and remember Him constantly. The aspect of Zikr, the remembrance of Allah, and is a

wide aspect, however, it as is part of “what sets apart the living from the dead” [Bukhari].

“And remember me, and, I will remember you, be grateful to me and never deny me.” Surah al-

This world, Dunya, will take a person away from Allah, who busies himself in worldly businesses

and who does not remember Allah at any time. Allah says:

“He who turns away from the remembrance of Rahman (Allah, the Compassionate),

We assign a Satan devil for him, who becomes his intimate companion – and turns such people

away from the Right Path, while they think that they are guided aright.” Surah Az-Zukhruf: 36-37

We have reached a point where even our Salah (prayer)

is empty of Allah’s contemplation remembrance. Allah said: “Worship Me and establish Salah for

However, unfortunately, our Salah (prayer) is filled with the thoughts of Dunya, instead of

If the worldly businesses take us away from Allah’s Remembrance), we will forget Him. In addition,

if one forgotten Allah, Allah will also forget he and he might not listen to his supplications (Du’a).

So, what may cause the unacceptance of our Du’a?

Our hearts are preoccupied with Dunya! Rather than Allah’s Remembrance. Allah will say to those

who forget Him and do not prepare for the hereafter: “Now taste the reward for you’re forgetting the

meeting of this Day – We too have forgotten you now…”

“O you who have believed, let not your wealth and your children divert you from the remembrance

of Allāh. And whoever does that – then those are the losers” Surah – Al-Munafiqun: 9

In the Holy Quran, Allah mentions those true Muslims who prefer the hereafter to This Dunya.

These people make Dhikr, perform Salah, and observe other duties of Islam; and their worldly

businesses do not affect their worship. Quran says:

“[Such niches are] in houses [i.e., mosques] which Allah has ordered to be raised and that His name

be mentioned [i.e., praised] therein; exalting Him within them in the morning and the evenings

performance of prayer and giving of zakah. They fear a Day in which the hearts and eyes will

The Quran is the best Dhikr

So that It is good to mention that (Wahion Youha) the Quran Academy, Where You can:

You must be patient. Even when long periods of time pass by and others are blessed with what they

have been praying for while you still wait, be patient.

Even if the pains of waiting and praying and wishing tire you, be patient. For Allah does not waste

the effort of the doers of good. He delays His response only to hear you call to Him more. Be patient.

For what awaits you is sweeter than the bitterness of longing.”

Don’t just be patient with what Allah decrees, but rather be content and genuinely happy with

whatever He chooses for you that Allah knows what your soul really needs.