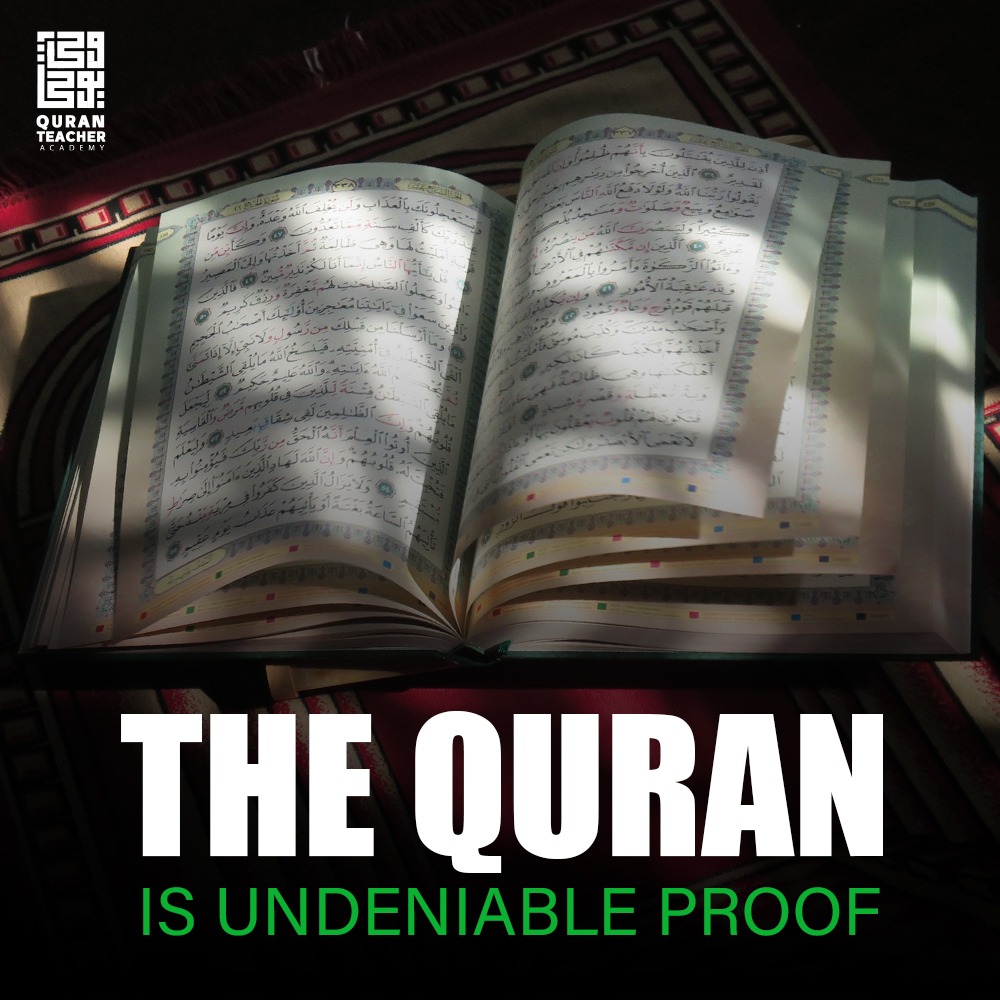 The Quran is undeniable proof

“The Glorious Quran is a Book whose verses are firmly arranged then distinguished from the All- wise, the All-aware.”

Almighty Allah has revealed to His servant and messenger Muhammad ﷺ that he may be a warner to the world. “A Book We have sent down to thee that thou might lead men out from the darkness into the light, by their Lord's “The Glorious Quran is a Book whose verses are firmly arr .........

be a warner to the world.

“A Book We have sent down to thee that thou might lead men out from the darkness into the light,

by their Lord’s permission, to the way of the All-mighty, the All-laudable.” Surah Ibrahim: 1

We should know that The Glorious Qur’an is Allah’s eternal message.

The Quran is His clear testimony, final argument, undeniable proof, and His eternal living miracle

as evidence to the world, verifying his prophethood, proof of his apostleship, and light-guiding

mankind to the Faith of Allah (Monotheism) and a guide leading towards the straight path.

Prophet Muḥammad (ﷺ)], then produce a surah the like thereof and call upon your witnesses [i.e.,

supporters] other than Allah if you should be truthful.” Surah Al-Baqarah: 23

It seems that many Muslims are unaware of the potentials of the Quran.

It is usually read every day without doubt but its content is frequently neglected in our reading.

adheres because of social show.

these meetings may be against Islam!

The Quran is losing ground in the lives of Muslims

Lack of comprehension or misunderstanding leads to dangerous results. The enemies of Islam

exploit the weakness of Muslims to overpower them. They want Muslim young people to belittle the

Qur’an and cast doubt on its authenticity and glory.

another to join in the battle against Islam. And although some of them still call themselves Muslims,

when Islam is mentioned they turn to withdraw and silent.

religious teachings. Indeed, there are many obstacles in the way of conscientious Muslims to achieve

this goal in the Muslim countries, for there are neither enough experts to carry out this great task,

nor sufficient means and financial support to fulfill these objectives.

Consequently, the battlefield is strewn with Muslim victims because of the weak side of the Islamic

army, either they are slaughtered or dispossessed or persuaded to abandon Islam and sometimes to

join forces with the enemy. One of the most basic requirements is to assure Muslims that the Quran

of Almighty Allah, to our Prophet Muhammad ﷺ and Allah Almighty says in the Quran

“And Allah will surely support those who support Him [i.e., His cause]. Indeed, Allah

Those who have been expelled from their homes unjustly only because they said: “Our Lord is

Allah.” For had it not been that Allah checks one set of people by means of another, monasteries,

churches, synagogues, and mosques, wherein the Name of Allah is mentioned much would surely

have been pulled down. Verily, Allah will help those who help His (Cause). Truly, Allah is All-Strong,

The Miracle of the Quran

Every prophet is granted the power of performing miracles, from the Creator of the universe, Allah

Almighty. In order to give proof of the authenticity of his message. A miracle is an act that cannot be

performed with the aid of oneself learning and practice.

And Miracles must invariably conform to the mentality of the society in which a prophet is sent.

Hence, the miracle of Moses (peace be upon him) was the magic, because Pharaonic Egypt was an

expert in magic works. Jesus (peace be upon him) cured the leper and the blind from birth and

quickened the dead by the will of Allah.

is] like the form of a bird, then I breathe into it and it becomes a bird by permission of Allah. And I

cure the blind [from birth] and the leper, and I give life to the dead – by permission of Allah. And I

inform you of what you eat and what you store in your houses. Indeed in that is a sign for you, if you

This kind of miracle was required because his society expected such acts as proof of prophethood.

Similarly, our Prophet Muhammad ﷺ emerged amongst the Arabs who were experts in

the Arabic language and literature and challenged them in their own art.

The Miracles of the Prophets

We Muslims don’t differentiate between Muhammad’s miracle and the other prophets’ miracles.

In other words, the Quran is alive while other miracles are temporary or dead

. Hence, the miracles might be questioned or doubted but not our Prophet’s miracle. It should be

noted that the language is the miraculous aspect of the Quran, and there are other aspects that will

be dealt with in

sequence. Muslims point to the beauty of the language as evidence of the Qur’an’s miraculous

aspect. The Quran may be translated into other languages, but it may not retain the same power;

therefore, the true Quran is in the Arabic language.

As this is the Word of Allah, the Holy Quran must be treated with respect: one should perform

Wudu (ablution) before handling the Quran, and one should never put the Quran book on the floor.

The Quran should be heard at all times; in fact, the word Quran means “recitation.” The angel

“Recite in the name of your Lord who created” Surah Al-‘Alaq: 1

History of the collection of the Quran

Before the verses were collected into the book we now know as the Qur’an, the passages were

preserved just in memory. The Prophet’s Companions and believers of the early age of Islam were

These Companions were keen on teaching their children the Quran, both its memorization and its

meanings, who then taught their Descendents, and so on. This practice has been passed down to

this day and around the world, Muslim children from a young age teaching to memorize all or parts

of the Holy Quran.

Some go on to become professional reciters to become Shaikh of Quran, who perform for special

occasions, such as festivals, public gatherings, and funerals, and imam in mosques.

While they are governed by strict rules the reciters’ pronunciation, style, tone, and melody vary with

There is no restriction in learning the Quran it’s up to you. You memorize, read or listen to the

Quran, as listening to the Quran is to experience the presence of God Almighty. The text of the

Quran is divided into 114 Surahs, arranged accurately from the longest to the shortest. They include

Every Muslim must learn to recite the opening surah of the Quran, Al-Fatihah, and some of the

shorter ones to perform the ritual prayers (Salah) properly.

correcting mistakes take precedence over memorizing the Quran, and it is incumbent on the learner

of the Quran to realize that he is exposed to mistaken, and his duty when mistakes occur, to learn

the correct way of reading and master what his sheikh or Quran teacher teaches him.