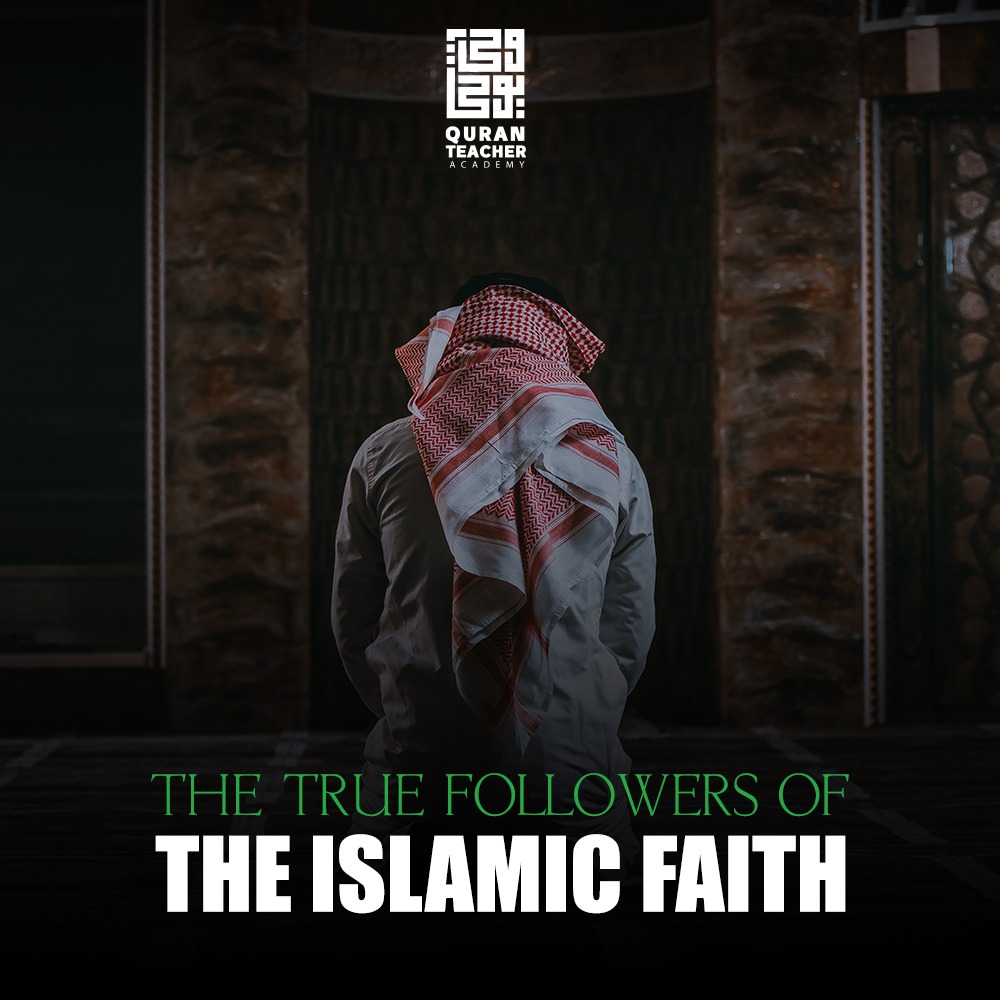 The true followers of the Islamic Faith

The true followers of the Islamic Faith “Among the believers are men true to what they promised Allah. Among them is he who has fulfilled his vow [to the death], and among them is he who awaits [his chance]. And they did not alter [the terms of their commitment] by any alteration.”

The above Qur’anic verse is the essence of the believers’ covenant with Allah. The verse signifies the The Islamic movement, the call to truth, and the beli .........
The true followers of the Islamic Faith

The true followers of the Islamic Faith

“Among the believers are men true to what they promised Allah. Among them is he who has fulfilled

his vow [to the death], and among them is he who awaits [his chance]. And they did not alter [the

The above Qur’anic verse is the essence of the believers’ covenant with Allah. The verse signifies the

The Islamic movement, the call to truth, and the believers’ unwavering commitment to Islamic. It is

also the assertion that the believers are ready to sacrifice all that they have for Faith.

This verse stands out as glowing accomplishments of those who strove for the cause of Islam.

Muslims until the Last Day.

It reveals the role of Muslims, their obligations to Allah, and their assignments.

acceptable in His sight.

The verse offers a concise definition of Islam to believers, as it reminds them of their covenant with

Among the many millions of Muslims, some are pious and have noble souls who are firmly in Allah’s

promise and who display their total commitment to His cause.

Praise is upon them for their discharging their obligations to Allah. They have completed their

appointed term and returned to Allah. They will be lavishly rewarded. Their reward on the Day of

Resurrection will be unending. Those who are still alive look forward to divine rewards and are true

to their covenant. They have not changed their commitments to any degree.

The above verse provides a concise definition of Islam. Accordingly, it presents the role model valid

until the Last Day. Allah sanctioned this example in the Holy Quran. Islam does not consist of the

No doubt, when one reciting it, he will be taken as a Muslim. For no one can contest his faith. We

are bound to love and respect everyone who recites an Islamic creedal statement and who accepts it.

Yet Islam goes far beyond this. A Muslim must follow all the Islamic rituals. More important,

however, is his commitment to his covenant with Allah. The pledge is that a Muslim will lead his

whole life in accordance with Allah’s commands. For He is the creator and sustainer of all things,

able to benefit and harm everyone.

Only He can honor or disgrace someone. He does whatever He wills and is the supreme Master of

Islam’s creedal statement: “There is no god besides Allah.” Also, it represents a pledge. One uttering

it testifies, both in word and deed, that Allah is the only creator and Regulator of the whole

All creation and commands are His. Allah has not abandoned the universe after having created it.

And Allah is the absolute Master of all that exists.

Nor has He delegated authority to anyone. Man is asked to try his best and make the most of the

opportunities available to him.

“Allah does not charge a soul except [with that within] its capacity. It will have [the consequence of]

what [good] it has gained, and it will bear [the consequence of] what [evil] it has earned.” Surah Al-

Not a leaf falls without His leave. Nor can anyone move an inch unless He approves it and sees it.

One’s fate cannot be altered. Nor can the destiny of anyone undergo any change unless He decides

Islam is synonymous with the mean of pledge

It is to be seen how many of us are true to this pledge, for men are liable to forget their oaths.

We must remind ourselves of the examples of the Prophet and the prophet’s companions. After

converting to Islam they cared little about their lives, they cared about Islam. Nor did they stick to

false notions of honor and glory. They paid no attention to the praise or criticism of fellow human

beings. Their only concern was their loyalty to Islam.

Muslims must appreciate this effort, especially in our turbulent times. Allah blessed us with the

bounty of Islam. He has done an immense favor for us.

Our main duty as believers is to be genuine in our pledge to Allah.

As Muslims, we should pose a challenge to our surroundings. In our beliefs, dealings, acts of

relationships, and in every human activity, we must behave as true Muslims.

Our commitment must refer to divine laws.

In every respect, we should be governed by Allah’s commands, even if this entails the loss of all of

our belongings, assets, and traditions.

Islamic society has nothing in common with nationalism. Nor is it specific to any particular culture

or nation. We are bound to the Prophet Muhammad’s elucidation of faith. We are committed to the

will of Allah and of His messenger Muhammad صلى الله عليه وسلم. At the same time, we must emulate

the Prophet’s role model. We should always be mentally prepared for the loss of our property and

lives for the sake of Allah.

At times out loyalty to Islam may land us in serious trouble. Political and economic conditions vary

from one country to another. Yet Muslims should adhere fast and firm to their faith. We may be

treated as disloyal citizens in a Godless country, with the doors to education and employment shut

on us. Economic avenues may be denied to us. Yet even in the face of such persecution, we must act

only on the commands of Allah and His Messenger.

“If the world to Allah was equal to a mosquito’s wing, then He would not allow the disbeliever to

have a sip of water from it.”

Sahl bin Sa’d (May Allah be pleased with him) reported:

Messenger of Allah (ﷺ) said, “Were this world worth a wing of a mosquito, He would not have given

a drink of water to an infidel.” Riyad as-Salihin 476

Some true believers are alive amongst us today. Allah has not ordained their death.

And some true believers have passed away. They attained martyrdom, shedding every drop of their

blood in Allah’s cause.

He fought valiantly in numerous battles. He led the Muslim army to victory in many encounters. Yet

Allah let him survive. Some no doubt were killed. Some attained martyrdom on the battleground

while others breathed their last in their homes. Their devotion to Da’wah was sincere, as they

preached Islam wherever they went, in their hometown or battleground. They spent their lives,

looking forward to their return to Allah Almighty.

There wasn’t the slightest shift in their devotion to Allah and Islamic.

As Muslims, we are obliged to prefer the Shari’ah to local customs and traditions. We must however

exercise self-restraint in practicing the Shari’ah.

Shari’ah commands guide us in every respect of life. Allah grants the title of “true believers” to the

companions and some Muslims of the early days. Yet this designation is valid for all times. Whoever

is true to the covenant and doing his obligations towards Allah may be taken as a “true believer”.

This is the only way out for us. True believers should be our role models and our understanding of

Islamic must be: “There is no god besides Allah.”

relationships with neighbors, t is an all-embracing faith for all times and places.

the last two Verses of Surat Al-Baqarah at night, that will be sufficient for him.” (Sahih Al-Bukhary).

The Messenger has believed in what was revealed to him from his Lord, and [so have] the believers.

All of them have believed in Allah and His angels and His books and His messengers, [saying], “We

make no distinction between any of His messengers.” And they say, “We hear and we obey. [We

seek] Your forgiveness, our Lord, and to you is the [final] destination.”

Allah does not charge a soul except [with that within] its capacity. It will have [the consequence of]

what [good] it has gained, and it will bear [the consequence of] what [evil] it has earned. “Our Lord,

do not impose blame upon us if we have forgotten or erred. Our Lord, and lay not upon us a burden

like that which you laid upon those before us. Our Lord, and burden us not with that which we have

no ability to bear. And pardon us, and forgive us, and have mercy upon us. You are our protector, so

give us victory over the disbelieving people.”