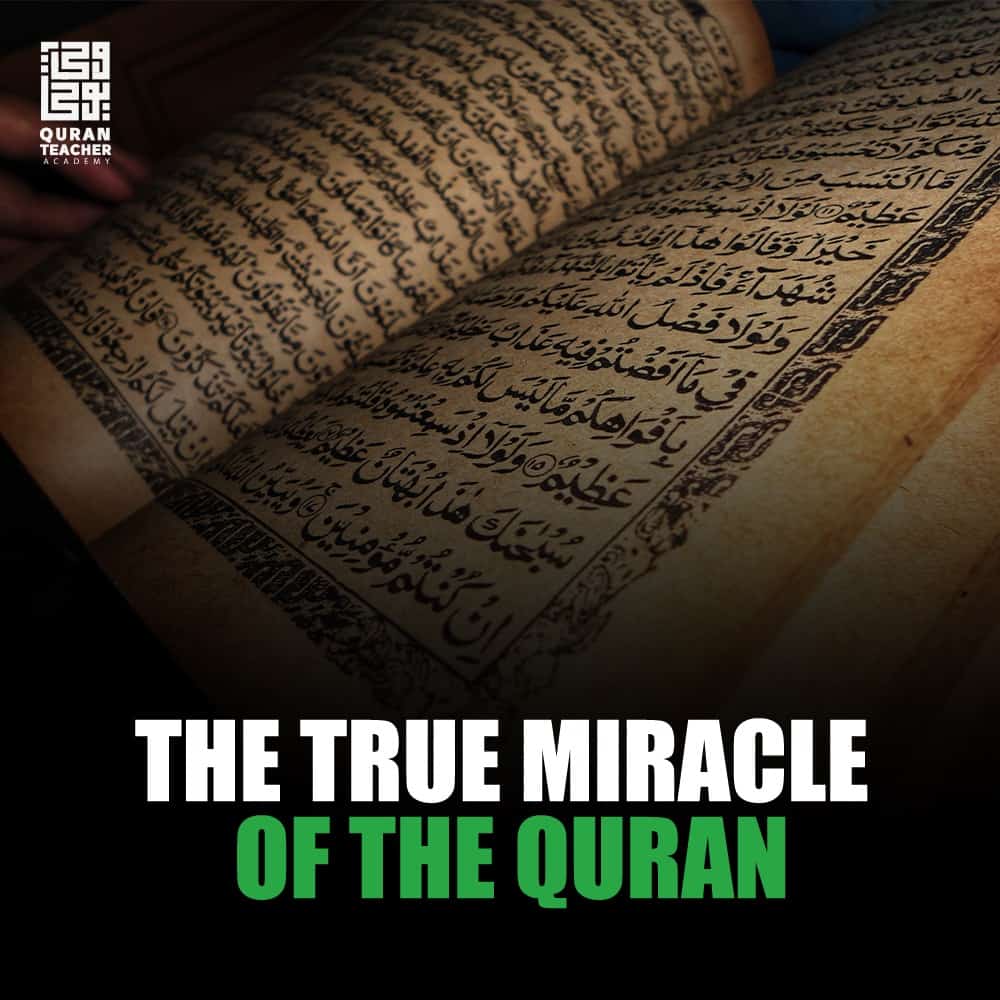 The True Miracle of The Quran

The true miracle of the Quran

development in societies to the material aspect only. Because in this case, the utmost achievement is

in comfort and luxury in this life and this is not what Allah created the human form. We can see that

clearly when we contemplate the Islamic literature of the “ .........

The true miracle of the Quran

development in societies to the material aspect only. Because in this case, the utmost achievement is

in comfort and luxury in this life and this is not what Allah created the human form. We can see that

clearly when we contemplate the Islamic literature of the “signs of faith”.So materialistic

development without taking the achievement of the ultimate goal of man’s creation.

into consideration is not only worthless, but it also contributes to man’s sense of arrogance and

is an extremely powerful book that came to eradicate false beliefs and reform the hearts of men. So

when the Jinn heard the miracle of the Quran recited, without any delay, their hearts were

transformed: “A group of Jinn listened to this Quran. They said: Verily! We have heard a wonderful

Recital.” “It guides to the right course, and we have believed in it. And we will never associate with

which is the miracle of the Quran has been preserved by all Muslim generations. It became the

legislation and lifestyle the Ummah lived by; reciting it, memorizing it, and studying it. One of the

words and meanings. This is the command from the One who revealed it and the key to truly

benefiting from it: “[This is] a blessed Book which We have revealed to you, [O Muḥammad], that

they might reflect upon its verses and that those of understanding would be reminded.” Sād: 29

In fact, the greatest form of regret and blame is attached to those who do not fit the above

description: “Then do they not reflect upon the Qur’ān, or are there locks upon [their] hearts?”

cannot be truly fulfilled unless the reader of the Quran is aware of the deeper meanings of it, the

themes and objectives of the Surahs, and the wisdom found within them. For this reason, the

importance to documenting them within their works.

combined in all of the disciplines of the Shari’ah. The deeper meanings are intertwined within the

religion as a whole. So it may appear that the meaning of a particular Ayah or Surah is clear to the

reader, however, the Quran is something which cannot be reproduced by man, therefore, what may

knowledge. For this reason, the earliest disbelievers in it described it as enchanting witchcraft.

Ibn ‘Atiyyah said in the introduction of his Tafsir (1/278):

Allah is All-Encompassing in His Knowledge and the Quran consists of His words. If one realizes

this, then they will be quick to realize that the particular wording used in the Quran and the

arrangement given to it cannot be matched. If someone tried to replace the vocabulary or rearrange

disjointed and man would remain in ignorance and lack any memorization in it. Man is not all-

encompassing in his knowledge, and that is why the Quran set down the framework for human life

The Interpretation of the Quran

To understand the clearer and the hidden meanings found in the Quran, the scholars of tafsir have

given the topic of theming and discussing the arrangement of the Surahs a great deal of importance.

From them, Imam Fakhr al-Din al-Razi was a pioneer in this, of which he said in his tafsir, “the

greatest delicacies of the Quran are in understanding its order and connection with one another”.

paragraphs and chapters are not interrupted and its flow disturbed.”

There are two approaches to dealing with the Quran

Is based on interest in understanding and action.

It is based on attention to memorization and repetition, even if it is without action, or even without

There is no doubt that the pious believers follow the first approach;

they have nothing to do with those who recite the Quran and do not understand it, and therefore

they are not affected by it, those whom God Almighty has censured of all kinds. Allah says:

“So what is [the matter] with those people that they can hardly understand any statement?” An-

Then do they not reflect upon the Qurān, or are there locks upon [their] hearts? Muhammad: 24

And whenever a sūrah is revealed, there are among them [i.e., the hypocrites]

those who say, “Which of you has this increased in faith?” As for those who believed, it has increased

them in faith, while they are rejoicing. At-Tawbah: 124

His crying – may God’s prayers and peace be upon him – upon hearing the Qur’an, and his being

affected by its meanings;

The Prophet (ﷺ) said to me,

” I said, “O Allah’s Messenger (ﷺ) Shall I recite (the Qur’an) to you while it has been revealed to

but when I recited the Verse: ‘How (will it be) then when We bring from each nation a witness and

present,” I looked at him, and behold! His eyes were overflowing with tears

I offered Salat (Tahajjud – optional night prayer) with the Prophet (ﷺ) one night, and he started

reciting (Surat) Al-Baqarah …. And when he recited the Verses which referred to the Glory of Allah,

(by saying Subhan Allah – My Rubb,

the Supreme is far removed from every imperfection),

the Great, and when he recited the Verses that mention supplication,

he supplicated, and when he recited the Verses that mention seeking Refuge of the Rubb, he sought

Then he bowed and said:

“My Rubb, the Supreme is far removed from every imperfection (Subhana Rabbiyal-Azim);” his

bowing lasted about the same length of time as his standing

(and then on returning to the standing posture after Ruku’)