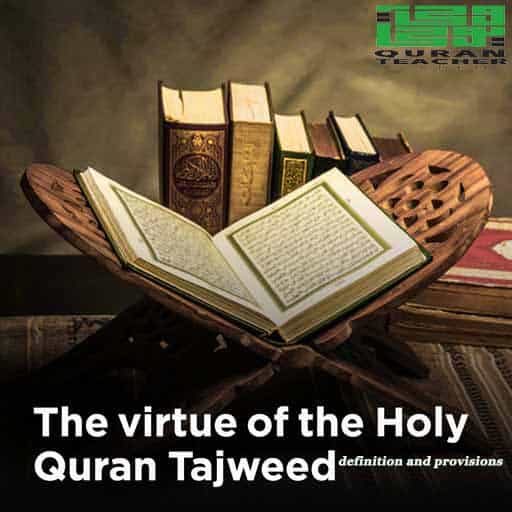 The virtue of the Holy Quran Tajweed (definition and provisions)

Allah Almighty revealed the Holy Quran upon His last messenger

years more or less. In that era, no recording or printing devices are available

as that now. Therefore, the only possible way to preserve this endowment of

Allah was to learn by heart. At the beginning of the revelation of the Holy

Quran, Holy Prophet (ﷺ) recite it and narrated the verses of a particular

chapter (Surah) of the Quran to His companions. Hence, in this way, the

recitation of the Holy Quran commenced. Next, the foremost task was torecite

the Holy Quran in Its proper pronunciation. Then the concept of Tajweed was

Tajweed is an Arabic word that linguistically means ‘proficiency’. It comes

from the same root letters as the word Jayyid, which means ‘good’. Therefore,

if Tajweed is to be considered with regards to Quran recitation, it means

Arabic language pronunciation. When every letter of the Quran is pronounced

with proper understanding and the way it deserves to be recited, then we can

say that the Quran is being recited with Tajweed. In other words when the

angel Jibril (Gabriel), may Allah exalt his mention, recited the words of Allah

to the Prophet Muhammad, (ﷺ), he recited them in a certain way and he

showed the Prophet (ﷺ), the ways in which it was permissible to recite the

Quran. So, it is obligatory upon us to observe those rules so that we recite it in

the way it was revealed. At the time of the Prophet (ﷺ), there was no need for

grammar and pronunciation. The Quran is the most precious Holy book for

Muslims. There is a reward for reading every word. In fact, for a better

of Holy Prophet Muhammad (SAW), there are other purposes or importance

of Tajweed is the fact that the Quran is revealed by Allah Almighty. Hence,

being His subjects, it is important that we should read and recite the Quran in

the very same way as He has revealed it. The recitation of the Quran serves

the fact that words do not change their meanings. Quran is in the Arabic

shortening or elongation of sounds results in a change in meanings.

Therefore, observing the rules of Tajweed in reciting prevents the recitation of

the Quran from making mistakes while reciting the Holy Quran.

The Holy Quran is the book of ultimate guidance. In fact, it’s not a book for

reading and reciting only. It’s a book of learning and understanding. Islam is

a practical religion and Holy Quran guides us about every aspect of life. Above

all, there is a reward for every single word of the Quran. Arabic is a beautiful

language, and especially the writing style of the Quran is matchless. In fact,

satisfaction. Most importantly it provides an accurate sense when we read the

holy Quran with proper Tajweed. The Quran is the word of Allah, and it’s

every syllable is from Allah. Its recitation must be taken very seriously.

The purpose of the Science of Tajweed

In essence is to make the reciter proficient in reciting the Quran, observing

the correct pronunciation of every letter with the rulings and characteristics

which apply to each letter, without any exaggeration or deficiency. And so,

through this, the reciter can recite the Quran upon the way of the Prophet

Classical Arabic dialect that it came down in. Arabic letter search have a

they originate and they also each have Sifaat – attributes, or characteristics –

particular to them. Knowing the Makhraj and Sifaat of each letter is an

easy. So, if a person does not know the attributes of each letter there is a

danger that he will change the meaning of thewords in the  Quran recitation.

mistakes in reciting the Quran.

deed) is multiplied by ten.

I do not say that Alif-laam-Meem is (considered as) a letter (inreward), rather

Tirmidhi, Ad-Darami).And he! also said:”He who is skillful in reciting the

Quran is with the unveiled, honorable, and pious (i.e. Hur-al-Ain). And he

who stutters when reading the Quran, (and its recitation) is difficult upon

he! said:”Verily he who has nothing of the Quran in his heart is like a house

(which has been) destroyed.” (Reported by At-Tirmidhi) have two rewards.”

(Reported by Bukhari). The Holy Quran is the greatest blessing of Allah

Almighty not just for Muslims but all human beings. It carries great

knowledge whether regarding the universe or about human life in general.

Besides the enriched knowledge, the recitation of the Quran carries religious

and spiritual benefits for Muslims. The Holy Quran is the literal words of

mankind. Being so important, the Holy Quran must be recited correctly, so as

not to create any sort of ambiguity or misunderstanding. Allah Almighty

addressed Prophet Muhammad (PBUH) in the Quran, “…And recite the

Century (Hijri) says in his famous poem detailing the rules of Tajweed: “And

applying Tajweed is an issue of absolute necessity, whoever doesn’t apply

Tajweed to the Quran, then a sinner is he.” Sheikh Zakariya Al-Ansari [died in

926 H.] said in explanation of this verse in his book: Sharh al-Muqaddimah

changes it and ruins the meaning”. So, he regarded it as an obligation to keep

away from the major mistakes in reciting the Quran. The scholars have

• Clear mistakes: which usually change obvious things and change the

• Unobvious (hidden) mistakes: for which one may need to study Tajweed

Allah says in the Quran,

The meaning of which is: ‘And recite the Quran (aloud) in a (slow and

‘Those who We have given the Book to, give it its right in recitation (recite it

recite the Quran in slow, measured, rhythmic tones as Allah had instructed

him, not hurriedly, but rather “he would recite a surah in such slow rhythmic

tones that it would be longer than it would seem possible.” He would stop at

the end of each ayah. He commanded people to recite in a beautiful voice in a

pleasant melodious tone. He said “Beautify the Quran with your voices [for

a fine voice increases the Quran in beauty]” and he said, “He who does not

recite the Quran in a pleasant tone is not of us.” Unfortunately, all too often

and without any feeling. We should put all our efforts into reciting the Quran

with as much feeling as we can! Have you ever prayed behind an Imam who

The Prophet (ﷺ) said: “Truly the one who has
one of the finest voices among the people for reciting the Quran is
the one whom you think fears Allah when you hear him recite.”

beauty of his recitation, Abu Moosaa said “Had I known you were there, I

would have made my voice more pleasant and emotional for you.”

that the Quran is the word of Allah. In it, we find exhortations, warnings,

glad-tidings, parables, stories of the past, commands, and prohibitions. Ayah

to make us think, reflect, cry, fear, hope, love, fall down in prostration. How

Quran, we should imagine that we are trying to feel and convey the full

message behind that ayah. Perhaps some of us don’t feel confident. I believe

not understanding the meaning of what we are reciting. So, let us work hard

to remove these two obstacles by learning Tajweed and working towards