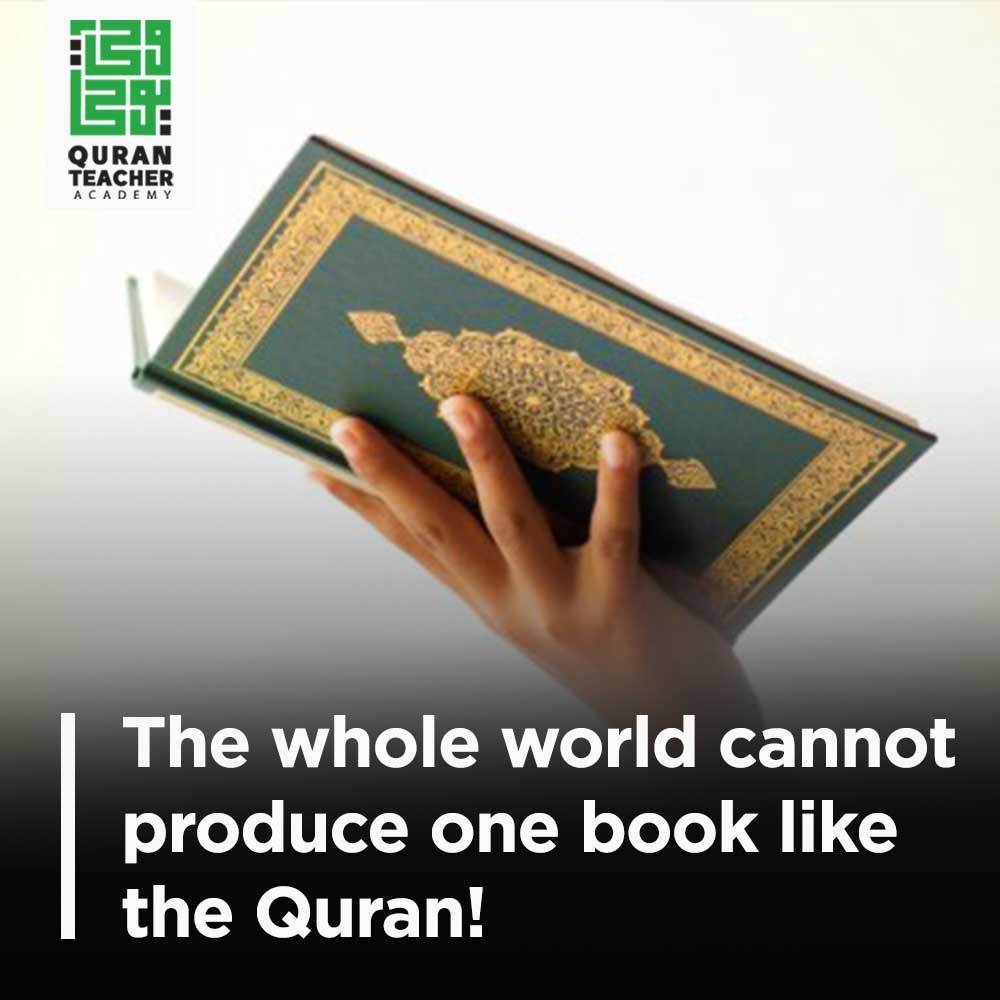 The whole world cannot produce one book like the Quran!

The Quran was revealed more than 1,400 years ago at Mecca and Medina. The Arabs used to

worship idols of stones of which the most important ones were set in the Ka'bah.

The Arabs lived a simple life, though it was savage in many aspects such as the exposition of

children because of poverty.

They were proud of their language and justifiably so since Arabic is a very rich and sophisti .........

The Quran was revealed more than 1,400 years ago at Mecca and Medina. The Arabs used to

worship idols of stones of which the most important ones were set in the Ka’bah.

The Arabs lived a simple life, though it was savage in many aspects such as the exposition of

children because of poverty.

Poets and orators were almost the idols of their tribes. Poems were read by rote, and annual poetry

or literary competitions were held at a place called Suq Ukaz. Thus, the Arabs became past masters

a challenge, challenging them to produce a similar Qur’an.

“Say, “If mankind and the jinn gathered in order to produce the like of this Qur’an, they could not

produce the like of it, even if they were to each other assistants.” Surah Al-Isra: 88

The whole of the world is in co-operation just to produce one book!

It is a humiliating defeat and a glaring one. The challenge was reduced to ten Surahs (chapters) in

order to prove to the whole world the unique quality of this book.

“Or do they say, “He invented it”? Say, “Then bring ten surahs like it that have been invented and

call upon [for assistance] whomever you can besides Allah, if you should be truthful.” Surah Hud: 13

The Arabs couldn’t face the humiliating challenge again, and it was further reduced to one surah

only. One surah may be one verse. Still, the proud and eloquent Arabs couldn’t encounter the divine

“Or do they say [about the Prophet (ﷺ)], “He invented it?” Say, “Then bring forth a Surah like it and

call upon [for assistance] whomever you can besides Allah, if you should be truthful.” Surah Yunus:

The beauty of the Qur’an, the music recitation, its strength of conviction, logic, simplicity, depth,

spirit and wisdom are much above what the Arabs and non-Arabs knew or could conceive.

The Beauty and power of the Holy Qur’an

When the Qur’an was being recited by Muslims, unbelievers usually closed their ears; some

produced noise-whistling and shouting, in order not to hear the Qur’an and bewitched people. Many

unbelievers converted to Islam through simple chance when listening to it whilst passing by.

against the irresistible beauty and power of the Holy Qur’an.

However, they had to find ways to put people off and justify their own attitudes. They invented lies

“So remind, [O Muhammad], for you are not, by the favor of your Lord, a soothsayer or a madman.

Or do they say [of you], “A poet for whom we await a misfortune of time”?

We undoubtedly need a miracle in science, telling us what’s going on in the heavens and ourselves

during this era. The Qur’an although not a scientific text, reveals many secrets of the wonders in the

universe as part of its call to believe in the Creator Allah Almighty.

The secrets of the universe uncovered in the Quran

“Do you not consider how Allah has created seven heavens in layers. And made the moon therein a

[reflected] light and made the sun a burning lamp? And Allah has caused you to grow from the earth

a [progressive] growth. Then He will return you into it and extract you [another] extraction. And

Allah has made for you the earth an expanse. That you may follow therein roads of passage.” Surah

The sun is not static but moving in a computed path. Remember the widespread belief that the earth

was the center of the universe and it was flat. Remember that because of these beliefs scientists were

burned alive and some imprisoned for their observations and research!

The Qur’an declared these facts more than 1400 years ago.

“And the sun runs [on course] toward its stopping point. That is the determination of the Exalted in

Might, the Knowing. And the moon – We have determined for it phases until it returns [appearing]

like the old date stalk. It is not allowable [i.e., possible] for the sun to reach the moon, nor does the

night overtake the day, but each, in an orbit, is swimming.”

“Then He directed Himself to the heaven while it was smoke and said to it and to the earth, “Come

[into being], willingly or by compulsion.” They said, “We have come willingly.”

“Allah who erected the heavens without pillars that you [can] see; then He established Himself

above the Throne and made subject the sun and the moon, each running [its course] for a specified

term. He arranges [each] matter; He details the signs that you may, of the meeting with your Lord,

be certain.”
The invisible details most probably mean the forces of gravitation, magnetic, and others that exist in

the universe which holds the planets apart and in relation to each other.

“And you see the mountains, thinking them motionless while they will pass as the passing of clouds.

[It is] the work of Allah, who perfected all things. Indeed, He is Aware of that which you do.”

“Indeed, those who disbelieve in Our verses – We will drive them into a fire. Every time their skins

are roasted through, We will replace them with other skins so they may taste the punishment.

Indeed, Allah is ever Exalted in Might and Wise.”

Quran is the Quran study group.