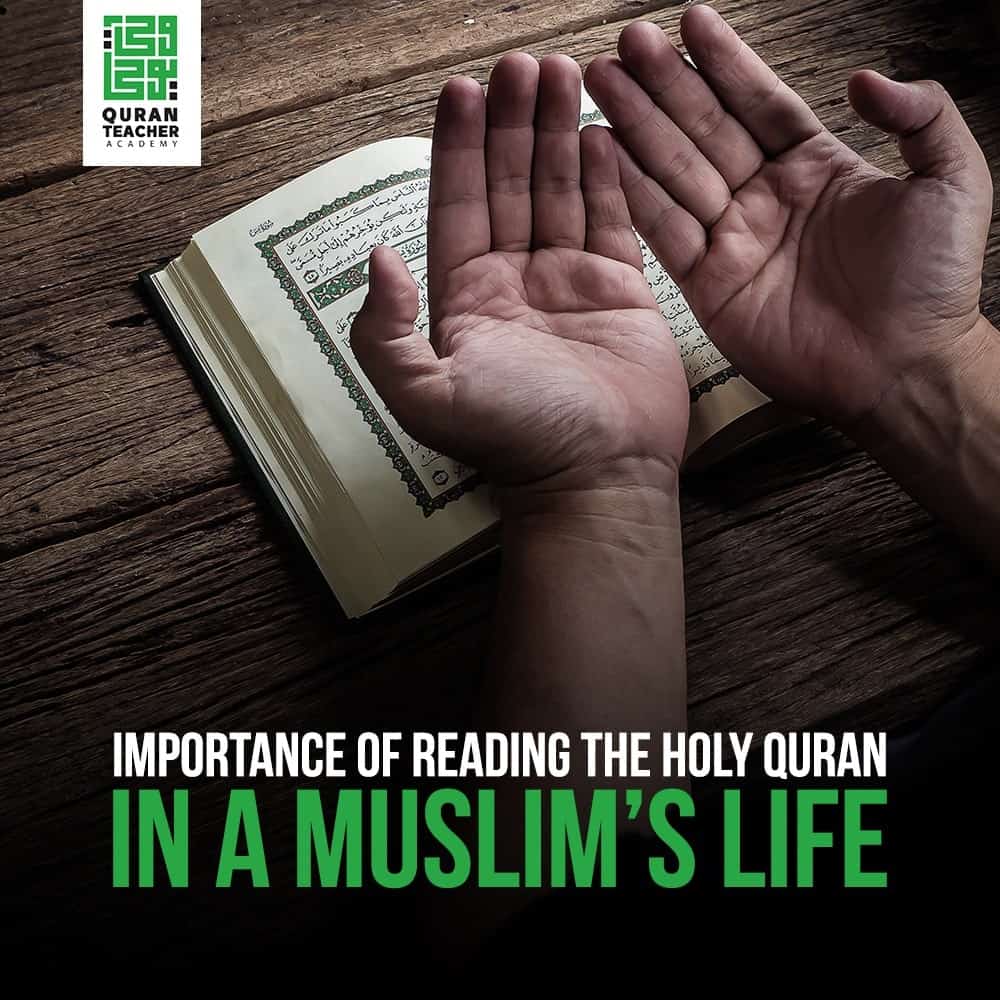 Importance of reading the Holy Quran in a Muslim’s life

Quran is the Holy Book of Allah revealed on Hazrat Muhammad (ﷺ).

Certainly, the best book for guidance about every matter of life and the

afterlife. Muslims and non-Muslims are aware of unlimited benefits. We as

Muslims can understand the teaching of Islam through the Holy Quran.

Above all, this book is itself a miracle and revolutionary.

Quran is the Holy Book of Allah revealed on Hazrat Muhammad (ﷺ).

Certainly, the best book for guidance about every matter of life and the

afterlife. Muslims and non-Muslims are aware of unlimited benefits. We as

Muslims can understand the teaching of Islam through the Holy Quran.

Above all, this book is itself a miracle and revolutionary.

The Holy Quran is the divine book and the name of Allah. The claim that it

book in the world. In addition to the depth of meaning that the verses of the

Quran carries, there is also the underlying language that makes it different

from any other text in the world and Arabic. The Holy Quran is a book in

Allah Almighty has blessed us with the perfect code of life. The Quran covers

all aspects of life that one needs to know about. The best of all education in

this country is the Quran and finding it compulsory for all Muslims. Being a

Muslims, it is our belief that the reading of the Holy Quran is a basic and

The reading of the Qur’an

is compulsory for Muslims whether male or female.

It is our religious duty to read the Quran with proper understanding. The

in every aspect of life or path. The Holy Quran is comprehensive teaching that

leads people to the truth and enlightens them with Islamic teachings.

first of all, the biggest benefit of the Holy Quran for Muslims is the reward of

reading. They are multiple other benefits however rewards carry a lot of

importance for Muslims. We believe in the afterlife and rewards are the only

things that can make us successful.

It raises our standard in the eyes of Allah and makes us pious. There are 10

rewards for reading even a single word of the Quran. There are multiple other

yourself eligible for rewards, such as:

Muslims have several various forms of rituals of prayer, which they perform

daily. Prayer is of great importance to them in their lifestyle and they use the

Quran for many of their prayers. Five times a day, they do prayer rituals

called Salah. At dawn, at midday, in the afternoon, at sunset, and in the

they pray. These five prayers, in the order of which they are performed, are

called salat. Muslims also follow the Quran as a guide to do their worship

The Noble Quran will be invaded by Muslims on Judgment Day. Those who

afterward. Those who read the Quran their status will be brought up in this

“Best of all you read the Holy Quran and teach it to others.” (Bukhari).

The Holy Quran will lead us to Paradise:

The Holy Quran is the only way to paradise and salvation. The Noble Quran

the entire Ummah. Go back to it and use it in everyday life to reach a level

that is regarded as high consciousness in the presence of a supreme deity. The

guidance. The Quran was sent to Prophet Muhammad (ﷺ) by Gabriel (Jibril)

was reached today in writing.

The Quran is a material and spiritual guide for individuals and society, all

classes of people occupying any place or time and throughout one’s life.

Everyone, from the president to the street person, gets things mentioned in

the Quran. They take the knowledge and lessons needed for peace and

harmony in the world and after they return.

Allah says in the Quran: “Then do they not reflect upon the Quran or are there

locks upon their hearts?” (Surah Mohammad verse 24). One should read the

heart and soul will be filled with the light of its pure guidance.

Allah says in the Quran, and this “(Quran) is a book We have revealed which

is blessed, so follow it and fear Allah that you may receive mercy”,(Surah Al

Anam verse 155). One can apply the teachings of the Qur’an in daily life by

result in his transformation into a true servant of Allah.

Quran is a source of forgiveness on the day of judgment. There are specials

from Allah to the Muslims who learn the Quran by heart. The person who

Judgment. what can be great for a Muslim to get into heaven’s afterlife?

problems. Today everybody even wealthy and rich persons are dealing with a

lot of problems. We need the guidance of Allah, that how we can get rid of

Allah has provided us a perfect book of guidelines for our help. In fact, the

country. Most importantly when you read and understand the Quran you find

it as it’s only for you.

diseases and problems. We Muslims strongly believe that Allah is the ultimate

supreme leader and All the powers belong to Allah.

who belief (in Islamic Monotheism and act on it), and it increases the

Zaalimoon (polytheists and wrongdoers) nothing but loss”, [Quran Al-Isra’