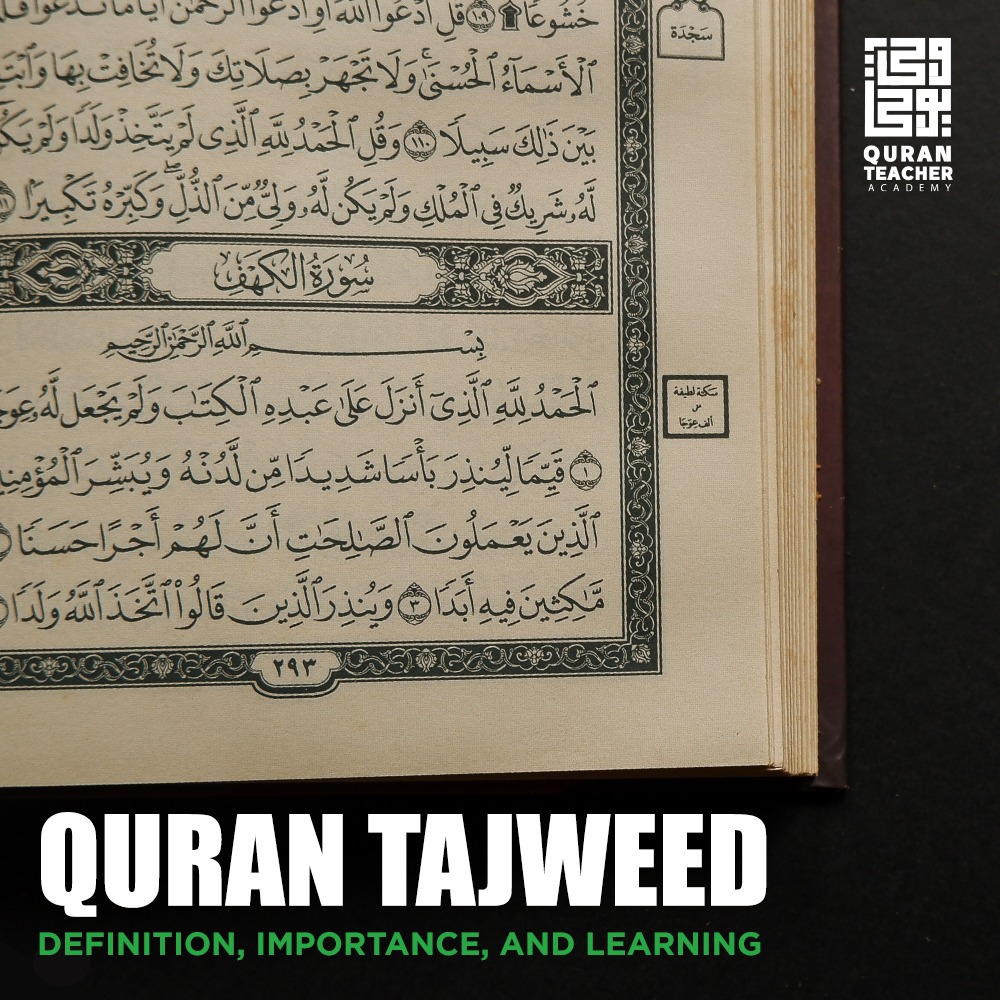 Quran Tajweed: Definition, Importance, and Learning Allah سبحانه وتعالى has given us one of the best books, and He has given us the best religion “Islam”. The importance of learning how to read the Quran is very important and essential. Allama Jazari says in his book: that reading the Quran with Tajweed is very important. And that a person who doesn’t read the Quran with Tajweed and doesn’t stay away from the major mistakes is counted sinful. .........
Quran Tajweed: Definition, Importance, and Learning .........

The importance of learning how to read the Quran is very important and essential.

Allama Jazari says in his book: that reading the Quran with Tajweed is very important. And that

May Allah سبحانه وتعالى save us all from that.

We should always try to go to a Quran teacher who knows the sciences of the Quran properly. To

For example: Not making the letter Sakin where it is supposed to be Mutaharik. Also, not deleting or

These are all major mistakes.

Now there are Quran teachers available in our localities or online. We should go to these people and

learn the sciences of the Quran.

Be sure to speak to one of the Quran consultants to guide your best learning.

What is Quran Tajweed?

of the Quran is as the Prophet Mohammed صلى الله عليه وسلم, recited.

The word “Tajweed” means to improve, make better, betterment. It is one of the most honored of

sciences due to its relation to Allah’s words.

its rights and dues of characteristics.

Tajweed preserves the tongue from mistakes in pronunciation of the Glorious Quran during reading.

– One who wishes to learn Quran Tajweed needs to understand and well practice its several principles.

– The knowledge of Tajweed is contingent on four things:

1- Knowledge of the articulation points of the letters.

2- Knowledge of the characteristics of the letters.

3- Knowledge of what rules change in the letters due to the order of letters in the Arabic sentence.

4- Exercising the tongue and a lot of repetition.

Why is Quran Tajweed important?

pronounced so that our words have the intended meaning. For example, we pronounce the letters

“ص” and “س ” differently, and that when you mix them up in words, you can end up meaning

something but saying something else.

Moreover, reading Quran with Tajweed is obligatory on every Muslim as it’s “Fard Ayn”. Every

Muslims should read Quran with tajweed in their daily prayers.

Reported God’s messenger as saying, “Beautify the Quran with your voices.”

“He does not belong to us who does not chant the Quran.”

“Or add to it, and recite the Quran with measured recitation.”

Who is the founder of the science of Tajweed?

Qur’an was revealed to him with tajweed, and he was instructed on it from the Trustworthy, Jibreel,

until it came to us.

The rule setters from the scientific point of view are the scholars of the Quran sciences, such as Abu

Some differences in the Arabic language

are:
د ت ف ك ر ل
The ra’ “ر” and lam “ل” are two letters that non-Arabs have some difficulty pronouncing correctly.

The ra’ uses the tip of the tongue and the top of the tip and the gums of the two top incisors, but the

trick to the ra’ is actually to hit the gum. Many Muslims try to pronounce the ra’ but without

touching the tongue to the gum. Some mistakenly use the throat, as the French do in the French

“r”. The Arabic lam has the widest use of the tongue of any other letters but uses only the end of the

sides of the tongue until it ends at the tip, then it hits the gums of the front upper eight teeth.

• Another mistake incurred by Arabs and non-Arabs alike is in making proper stops and starts.

There is more than one aspect to this mistake.

The first aspect is that the proper way to stop on a word is when there is a Sukoon, or absence of a

vowel on the last letter of the word.

It is not allowed to stop when there is a Harakah, or vowel on the last letter of the word.

The second aspect: It is not allowed to stop at a place that contradicts the meaning intended by

The same mistake occurs when starting up after stopping and taking a breath. Muslims cannot just

start on the next word arbitrarily, instead, the meaning needs to be considered, and the start should

be on a word that in the correct and complete meaning, even if the reader needs to go back two or

Essential manners for reading the Quran

1-Purity of the body and clothes and place.

6- Avoiding cutting off reciting to talk with people.

7- Stopping at a warning verse and seeking protection with Allah, and stopping at a verse of mercy

and asking The Merciful for His Bounty

8-Apply humbleness and Khushu when reading.