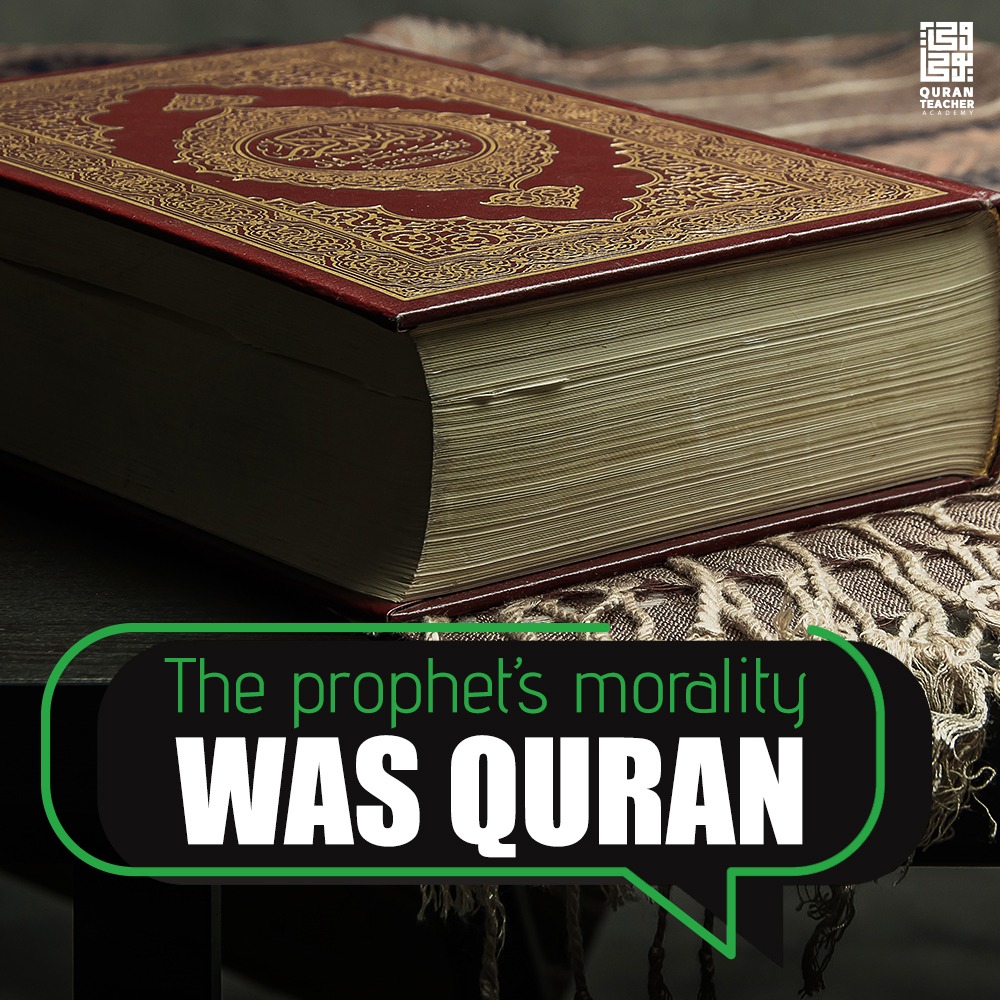 “So by mercy from Allah, [O Muhammad], you were lenient with them. And if you had been rude [in

speech] and harsh in heart, they would have disbanded from about you. So pardon them and ask

forgiveness for them and consult them in the matter. And when you have decided, then rely upon

Allah. Indeed, Allah loves those who rely [upon Him ] .”

“So by mercy from Allah, [O Muhammad], you were lenient with them. And if you had been rude [in

speech] and harsh in heart, they would have disbanded from about you. So pardon them and ask

forgiveness for them and consult them in the matter. And when you have decided, then rely upon

Allah. Indeed, Allah loves those who rely [upon Him ] .”

“Nun. By the pen and what they inscribe, You are not, O Muhammad by the favor of your Lord, a

Good morals which Allah سبحانه وتعالى provided His prophet صلى الله عليه وسلم and He taught them to us;

all lead people to guidance.

The morals of Ansar’s story

Ansar from Madinah’s residents رضى الله عنهم, who provided home and support the prophet after his

people refused him and drove him out of Makkah.

In the battle of Hunain, Muslims won many trophies more than any previous trophies, also got

many sheep. The prophet صلى الله عليه وسلم distributed those trophies among new Muslims as He

wanted to soften their heart.

He gave Abu Sufian 100 camels and some other men 100 camels, and he didn’t give Ansar anything!

Ansar felt sad and heartbroken. Some of them said: I swear this is because Allah’s messenger found

Saad ibn Ubada رضي الله عنه -the leader of Ansar- came to the prophet and said: ‘O Messenger of

Allah; this person from Ansar was heartbroken from you.

The Ansar said, “When there is a difficulty, we are called, but the booty is given to other than us.”

The news reached the Prophet.

He gathered them in a leather tent and said, “What is this news reaching me from you, O the group

of Ansar?” They kept silent, He added,” O the group of Ansar! Won’t you be happy that the people

yourself?” They said, “Yes.” Then the Prophet said, “If the people took their way through a valley,

and the Ansar took their way through a mountain pass, surely, I would take the Ansar’s mountain

be absent from him?”

Listen to his speech and Morals to know how people got guide!

investing faith and pious in their hearts.

One of the Prophet’s moral teachings

The story is endearing to people, and it leaves its mark on the souls, and hence the story was

mentioned a lot in the Quran Surah Yusuf Ayah: 3

“We relate to you, [O Muhammad], the best of stories in what We have revealed to you of this Quran

although you were, before it, among the unaware.”

“There was certainly in their stories a lesson for those of understanding. Never was it [i.e., the

Allah orders His prophet: “So relate the stories that perhaps they will give thought.”

tears and hearts were full of tears. A man said: “O Prophet of Allah, this is as if it were a parting

advice. So advise us”. He (ﷺ) said, “I admonish you to fear Allah, to listen and obey even if an

The Abyssinian slave is appointed as your leader. Because whosoever among you shall live after me,

will see much discord. So hold fast to my Sunnah and the examples of the Rightly- Guided Caliphs

who will come after me. Adhere to them and hold to it fast. Beware of new things (in Deen) because

every Bid’ah is a misguidance”.

3- To make the heart tender:

Allah’s Messenger (ﷺ) said, “If you knew that which I know you would laugh little and weep much.”

leads us for it. The narrator added: “I never saw the Prophet (ﷺ) more furious in giving advice than

he was on that day. The Prophet said, “O people! Some of you make others dislike good deeds (the

prayers). So whoever leads the people in prayer should shorten it because among them there are the

sick the weak and the needy (having some jobs to do).”

Messenger of Allah (ﷺ) saw a man wearing a gold ring. So he (the Prophet (ﷺ)) pulled it off and

threw it away, saying, “One of you takes a live coal, and puts it on his hand.” It was said to the man

after Messenger of Allah (ﷺ) had left: “Take your ring (of gold) and utilize it,” whereupon he said:

“No, by Allah, I would never take it when Messenger of Allah (ﷺ) has thrown it away”.

5- He commands gentleness and ease:

He is the role model in gentleness, Allah’s words descended upon him “Why do you say what you do

not do?” so He is the closest to apply this.

When the Prophet sent his grandfather Abu Musa and Mu’adh to Yemen he said, “Make things easy

and do not make them difficult; gladden and do not scare; comply with one another and do not

6- Encouragement and praise with Quran:

I said: “O Allah’s Messenger (ﷺ)! Who will be the luckiest person, who will gain your intercession on

the Day of Resurrection?” Allah’s Messenger (ﷺ) said: O Abu Huraira! “I have thought that none will

ask me about it before you as I know your longing for the (learning of) Hadiths. The luckiest person

the bottom of his heart “None has the right to be worshipped but Allah.”

He praised Abu Huraira for his eagerness to learning. Imagine how the effect of this feeling

motivates a man to more care and diligence.