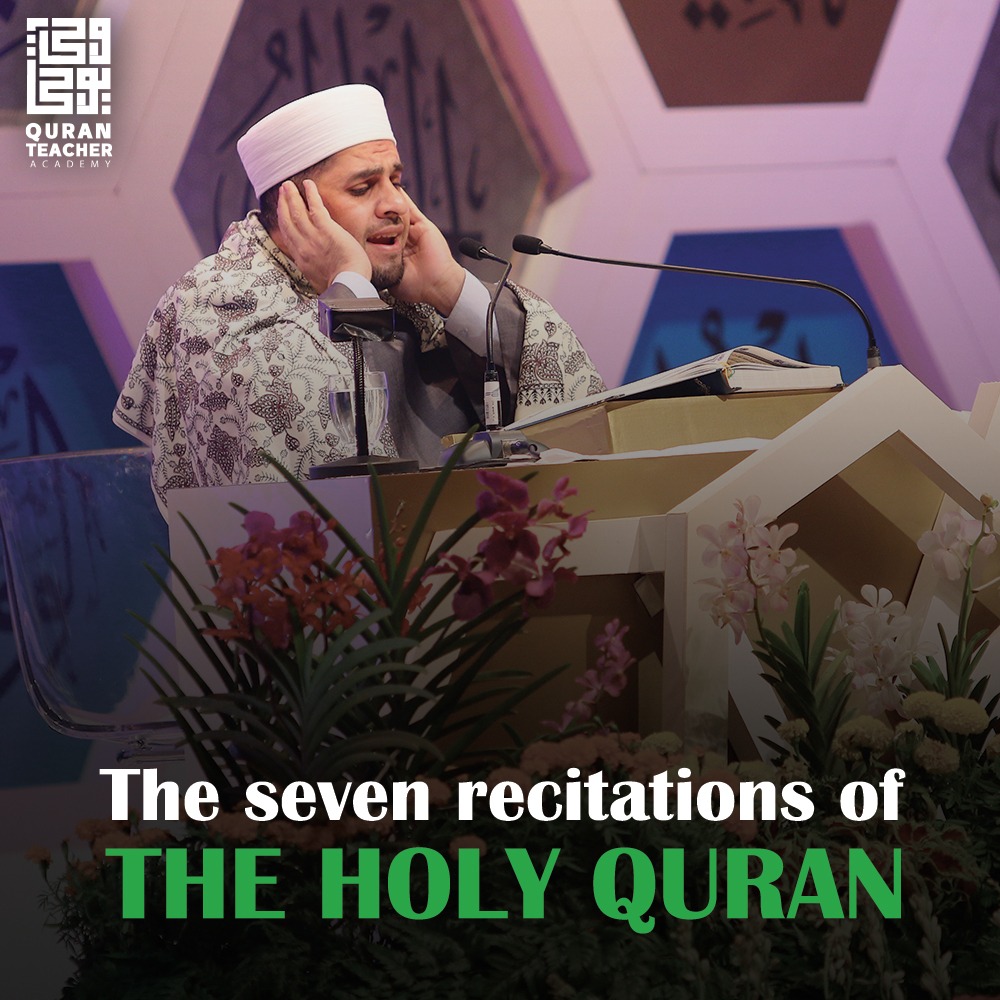 The seven recitations of the Holy Quran

make Quran easy for his nation as mentioned in Hadith:

“I have been sent, Gabriel, to a people who are unlettered, among whom are old women and old

men, boys and girls, and men who have never read a book.” He replied, “The Qur’an, Muhammad,

has been sent down in seven modes.”

These seven recitations differ in pronunciation but unite in meaning. Because in the Holy Quran;

there are no contradicting recitations. Therefore, Allah Almighty said: “If it had been from [any]

other than Allah, they would have found within it much contradiction.” Surah An-Nisa: 82

Let’s consider the seven recitations in the following examples.

Allah’s saying “فتبيّنوا” “Investigate” and “فتثبّتوا” which means “Make sure”, investing something and

making sure of it without hurrying. We can see that both meanings are needed.

The variation in recitations is wanted also in the verse of Wudu Allah says:

The word “وَأَرۡجُلَكُم” with Fathah and “وَأَرۡجُلكُم” with Kasrah is needed. Scholars explained that the word

with Kasrah means washing the feet, while Fathah means wiping the footwear.

We can learn that Wudu includes both washing and wiping. Hence, a single word has two meanings.

The seven recitations have delicate deep meanings. the miracle of the Holy Quran is countless!

The seven recitations of the Holy Quran

We have in English the color and color of the word, both are correct and have the same meaning.

Arabic as well as different variations depending on where the language is spoken. Since the Holy

Quran has revealed in Arabic it had variations within.

What are the seven recitations (ahrof) of the Quran?

At the time of the revelation of the Holy Quran, there were different variations of the Arabic

grammatical structure of the sentences had variations too.

For this reason, the Holy Quran was not revealed in one variation but in seven

.
Each of these variations is called “harf”

The Quran was revealed with all seven variations at the same time to the prophet Muhammad (ﷺ),

therefore, these variations are not up to us.

Why there are seven recitations (ahrof) of the Quran?

1- to make Quran easier to read and recite for people with different dialects.

2- to deepen the meaning of a verse. Let’s explain this verse:

In the first variation of the Ayah the word قُتِلُواْ is translated to “have been killed”, the verse means

that the deeds of those who have been killed in the cause of Allah will not go to waste.

The second variation of the Ayah the word قَاتَلُواْْ is translated to “have fought”, the verse means that

the deeds of those who have fought in the cause of Allah will not go to waste.

We can see the different variations of the Ayah enriching and add to its meaning. Those who have

been killed and those who just have fought in the cause of Allah will not go to waste.

3- to challenge non-believers, in variations and consistency.

Of course, these different variations are without contradictions and without mistakes but different

variations enriching the meaning of the verses.

What kind of changes are there in the seven recitations (ahrof) of the Quran?

variation for a word in the plural and another in a singular form.

In this Ayah we find the word “لِأَمَٰنَٰتِهِمۡ” is plural.

And in this Ayah, we find the word “لِأَمَٰنََٰتِهِمۡ” is singular.

2- Grammatical differences, like the difference between the conjugation of verbs

The first Ayah with Hamza “أَتَىٰكَ” and the second without Hamza.

Who are Hafs and Warsh?

recitations or (seven ahrof). They have taken it from their scholars to the prophet (ﷺ) himself.

Hafs and Warsh are one of these seven great reciters.

How can I learn Quran online?

2- All Levels and Ages of Students Are Welcome.

We ask Allah Almighty to guide us to what He likes.