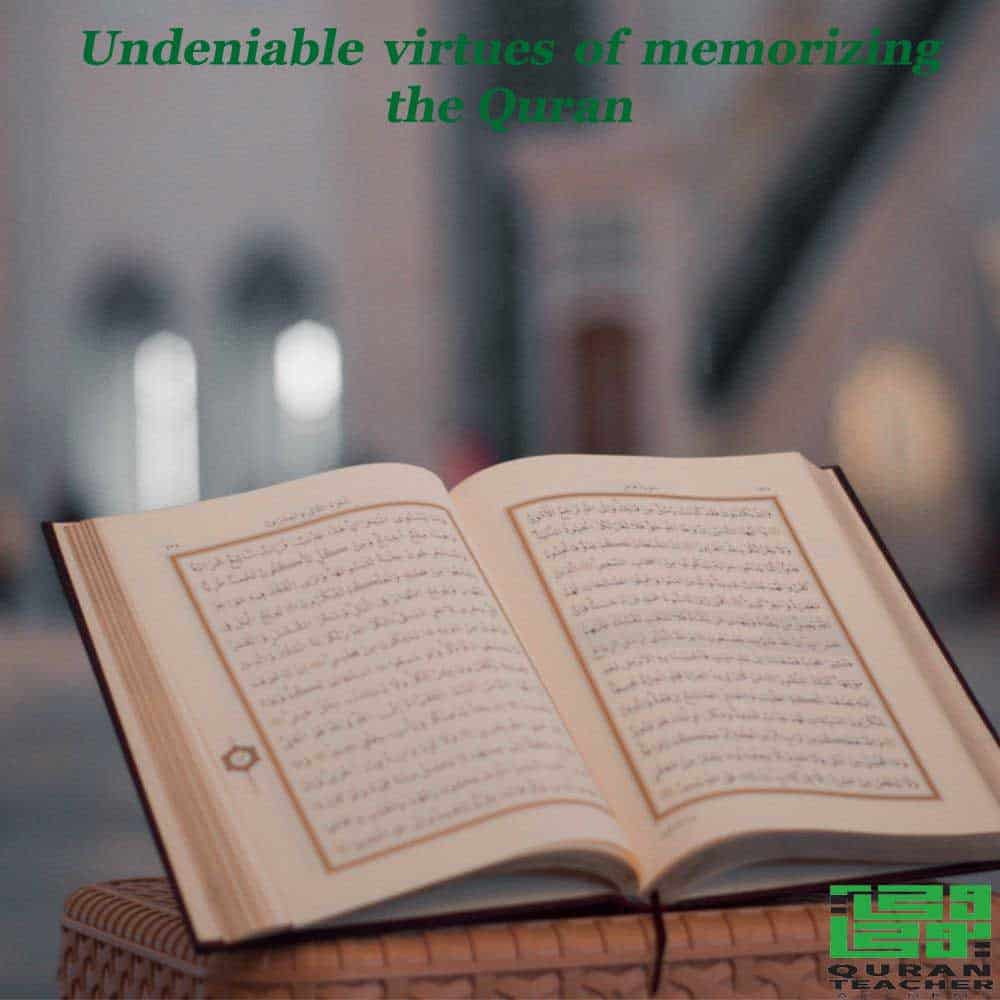 Undeniable virtues of memorizing the Quran

rewards for them in the learning, reciting, memorizing, and teaching of the Holy Quran. Whoever learns the Quran

with its meaning and understanding, is guaranteed happiness in this world and the world hereafter.

The act of memorizing the Quran with its understanding grants benefits and virtues to the Muslims in both worlds.

Allah (SWT) has blessed special privileges to the memorizers of the Quran in various ways. He (SWT) will reward

them with high status in Jannah. In this context, the virtues and importance of memorizing the Quran are

Nowadays, people’s lifestyle is so stressful and unbearable which makes them powerless against a few mental issues

that lead them to end it all. In this context, the Quran is considered as the best treatment to beat life’s pressing

factors and carry harmony to the hearts. Allah (SWT) said, “We reveal the Quran, which is cure and mercy for the

The memorization of the Holy Quran has a great advantage in enhancing the morals of the Muslims, as it showers a

fountain of virtues, a supply of religion, and proper guidance. The best example is our role model, the Holy Prophet

Muhammad (ﷺ) was described as Walking Quran due to the ethics and valuable traits that he had. The Quran

makes its believers enjoy superiority within the Muslim community.

Allah (SWT) ensures the happiness of the world to the Muslims who memorize the Quran.

“Recite the Quran, for it’ll come as an intercessor for its reciters at the Day of Resurrection.” The Quran also saves

its reciters and memorizers from the torture of Hellfire.

The “companion of the Quran” is the one who memorizes it by heart.

“The one who is well aware of the Quran should lead the Muslims in prayer,” that is, who memorized the most. The

on that day. This is the only distinctive feature of a Muslim who has memorized the Quran just for the sake of Allah,

“Most of the hypocrites of my ummah are amongst folks that have memorized Quran.”

Rewards for memorizing the Quran

The memorizer of the Quran has an incredible put on the Day of Resurrection and will be joined by Angels.

“The person who recites the Quran and he’s gifted with it, then he’s with the noble and blessed Angels.” The

Messenger of Allah said, “Whoever recites a letter from the Book of Allah and learns it by heart, he will be credited

daily and earn this reward. On the Day of Judgement, the Quran will intercede for them because the Prophet

Muhammad (ﷺ) said: “Fasting and the Quran will intercede for a person on the Day of Judgement. Fasting will say,

‘O Allah, I deprived him of food and desires during the day, so let me intercede for him.’ The Quran will say, ‘O

Moreover, the Quran will intercede for its memorizers with Allah (SWT).

‘Recite the Quran, for it will come on the Resurrection Day to intercede for its companions. Recite the two bright

surahs, Al-Baqarah and Surat Aal Imran, for they will come on the Day of Judgement like two clouds or two shades

or two flocks of birds in ranks, pleading for those who recite them.

The status of the memorizers of the Quran will commensurate with the last verse they memorized. The Prophet said,

“It will be said to the memorizers of the Quran ‘Read, advance in status and recite as you used to do in the world, for

your status will be commensurate with the last ayah that you recite.’”

The companion of the Quran will be rewarded with a crown and a garment of honor to wear. Enlightening the

virtues of memorizing the Quran,

“The Quran will come on the Day of Judgement and will say, ‘O Lord, adorn him.’ So he will be given a crown of

in status, and for each verse, you will receive one more reward.”

memorizers of the Quran.

‘Whoever memorizes the Quran, learns it and acts in accordance with it, on the Day of Resurrection his parents will

be given a crown to wear whose light will be like the light of the sun, and his parents will be given garments which

far outshine everything to be found in this world. They will say, “Why have we been given this to wear?” It will be

said, “Because your child memorized the Quran.”

In addition, it is reported by Hazrat Ali (ﷺ) that the Messenger of Allah (ﷺ) said, “One who memorized the Holy

Quran by heart will be allowed to intercede for ten persons with success.”

That is the memorizer of the Quran will not enter the Jannah alone but will also take his ten relatives with him.

Therefore, the memorizers of the Quran will be sent to Jannah and will receive a high rank there. as Allah (SWT) has

promised them this reward. Memorization of the Quran not only carries the importance of rewards for the Day of

Judgment but also have benefits in this world. The Holy Quran protects its reciters and memorizers from the pain

and stress of this world besides its sacred virtues.

Other Benefits of memorizing the Quran

There is little clarification available about why memorization of the Quran could be defensive of harmful diseases.

Also, memorization of the Quran leads the believer to recite it in an effort to hold it. and the frequency of recitation

an early age is better for Muslims who memorize a massive part of it. Recitation of the Quran additionally

approaches as a non-stop reminder to Muslims of factors that they must avoid. For instance, they refrained from

eating materials that might be injurious to their heart and mind.

Importance of learning Quran with Tajweed

Moreover, It is important to recite and learn the Quran with Tajweed also called proficiency. Recitation of the

Quran with Tajweed is the sunnah of our Last Prophet Muhammad (SAW). It is compulsory for every Muslim to learn

the Tajweed of the Quran in the same way as it revealed to avoid mistakes. Learning the Quran with Tajweed

preserves the meaning of the words. During recitation, any small variations of the sounds like shortening or

elongation of words can result in changing the meanings of the original words. Therefore, Every Muslim must learn

and memorize the Quran with the Tajweed.

The words of the Quran are the words of Allah (SWT). Thus, it is necessary for us Muslims to recite, memorize and

learn the Quran with Tajweed without changing its meaning and teachings.

To gain the rewards in this world and the world hereafter. Muslims must recite, memorize as well as teach the