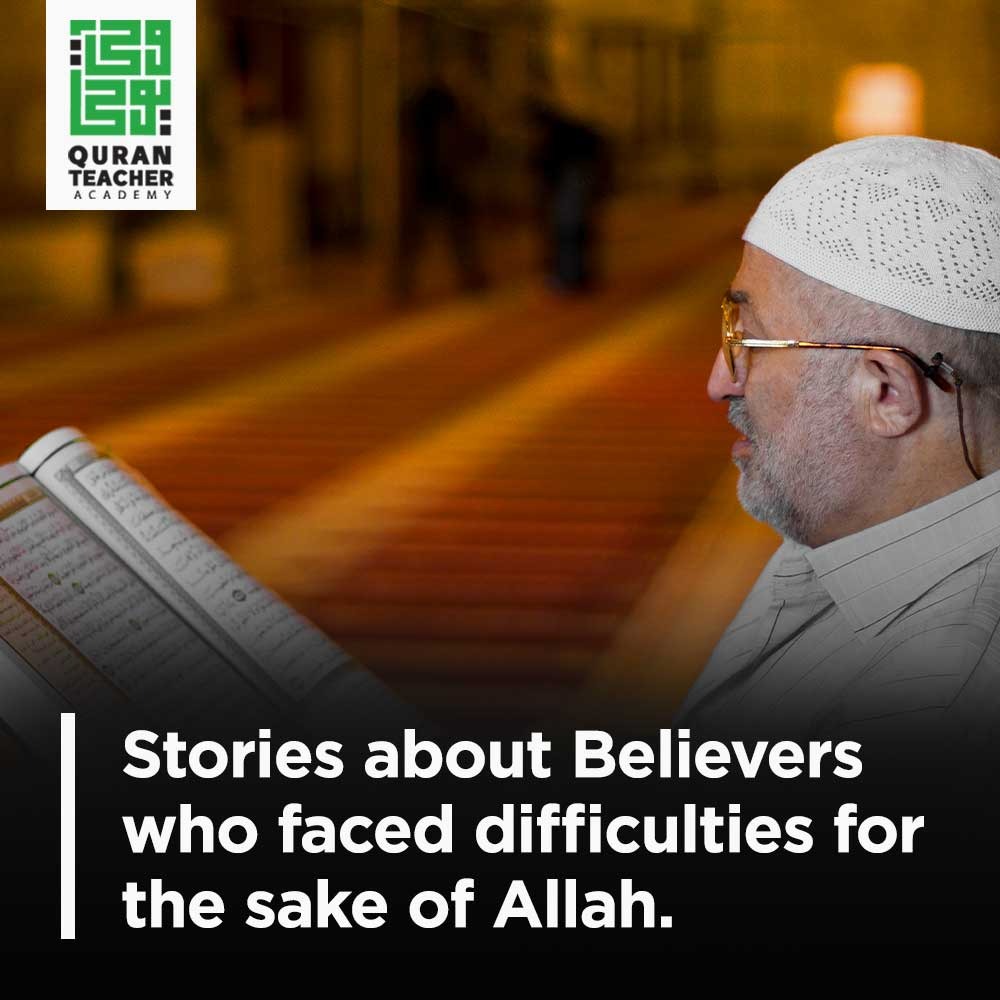 The story of the seven firm believers in Allah

“They were youths who believed in their Lord. We increased them in guidance. And We bound

hearts when they stood up and said: Our Lord is the Lord of the heavens and the earth.

The story of the seven firm believers in Allah

“They were youths who believed in their Lord. We increased them in guidance. And We bound

hearts when they stood up and said: Our Lord is the Lord of the heavens and the earth.

Never will we call upon any

god other than Him. If we did, we should indeed have uttered an enormity in disbelief.”

This story inspires both the heart and mind, motivates us. For it is a story of both tender feelings

conviction. The Quran has rendered these young believers’ stories immortal in history. They stand

out as an example for the youth of our time.

presently known as Syria and Palestine, which was then part of the Roman Empire.

the doctrine of monotheism.

society at that time.

He raised his voice against polytheism, racism, superstition, ritualism, and injustice.

Some noble souls accepted his message enthusiastically, themselves becoming his faithful disciples.

Some moved to various parts of the Roman Empire in order to invite people to the truth of religion.

The Quran says that they were young people who believe in Allah.

Youth, who are not so constrained and who don’t have restrictions or commitments to which the old

ones are bound, enthusiastically accept a new message which strikes a chord in their hearts. The

Quran doesn’t specify the ages of the youth in its account. This is just one stylistic feature of the

Quran. It makes generalized statements that carry goodness for anyone.

In other words, Quranic stories are marked by universalism.

The expressions used about them carry connotations of someone young at heart, high-spirited, and

radical in thought, they were a handful of young men.

Whenever the call to truth is made, only a few people respond positively in the initial stage.

Allah inspires and strengthens these brave souls to take up challenges.

It is said: “They were young men who believed in their lord” the emphasis on this attribute is

significant. For, at times, states or rulers lay claim to lordship that they provide sustenance to their

subjects. This gives rise to a superstructure of false beliefs. People are forced into pledging loyalty to

them to ensure their survival.

These youths rose in the heyday of the Roman Empire. This was the most organized, civilized, and

powerful empire of the day. It is also known for having passed on to posterity the heritage of Roman

law. These youths had the audacity to challenge a superpower of the day.

They declared their loyalty to the sound faith allah.

By then Christianity had not been corrupted. Some were genuine disciples of the prophet Jesus

(peace and blessings be upon him). They proclaimed that God, not the state, provided for their

sustenance. For they recognized the truth that Allah alone is the Sustainer of the heavens and the

earth. They made this declaration when the Roman Empire used to control all means of livelihood.

It reigned supreme in economic matters, disallowing any liberty to citizens.

Such absolute power rested with the state that it appeared to be in control of everything.

Boldly, however, the believers dismissed the Greek and Roman mythology of the day which

permeated life at that time. The whole of society was given to superstitions, polytheism, and

whimsical notions. In Greece, Rome, and ancient India, there were incarnations of God in the form

of numerous gods. Temples were erected in commemoration of this plethora of idols. There were

gods of love, wealth, provisions, war, and of the whole range of phenomena.

Yet these believing youth had the moral courage to dismiss this falsehood. Allah portrayed this story

by saying: “It is we who relate to you, [O Muḥammad], their story in truth. Indeed, they were youths

who believed in their Lord, and we increased them in guidance. In addition, we bound [i.e., made

firm] their hearts when they stood up and said,

“Our Lord is the Lord of the heavens and the earth. Never will we invoke besides Him any deity. We

would have certainly spoken, then, an excessive transgression. These, our people, have taken

besides Him deities. Why do they not bring for [worship of] them clear evidence? And who is more

unjust than one who invents about Allah a lie?” Surah Al-Kahf: 13-15

Truly, they were young men who believed in their Lord (Allah), and we increased them in guidance.

Moreover, we made their hearts firm and strong with the light of Faith in Allah when they stood up

and said: “Our Lord is the Lord of the heavens and the earth; never shall we call upon any ilah (god)

other than Him; if we did, and we should indeed have uttered an enormity in disbelief.

Why do they not bring for them a clear authority? And who does more wrong than he who invents a

The story of Prophet Musa

1- The story of Prophet Musa teaches us to trust Allah especially when we feel weak and hopeless.

messengers, she trusts Allah and puts her total reliance on Him.

A newborn baby in a basket in a flowing river. Yet Allah saves Musa from drowning. Allah protected

Musa despite him growing up in a house full of oppression and disbelief. This is a clear indication

that Allah guides whom He wills despite their surroundings.

2- When prophet Musa unintentionally kills a man from one of the pharaoh’s people,

they plot to execute Musa, unbeknownst to him. But Allah protected Musa in a way that he didn’t

that came to help Musa by the will of Allah.

“And will provide for him from where he does not expect. And whoever relies upon Allah – then He

is sufficient for him. Indeed, Allah will accomplish His purpose. Allah has already set for everything

surrounded by men. Prophet Musa’s natural instinct is to help these women so he ensures that the

animals have moved so that the woman can enter the place of the well. Musa then sits underneath a tree and recites this Dua:

“then he went back to the shade and said, “My Lord, indeed I am, for whatever good You would send

daughters to Musa in exchange for work.

Prophet Musa’s total reliance on Allah is a clear indication of the faith and trust he has in His lord.

Allah provides Musa something that he didn’t imagine.

4- When Allah tells Musa that He has chosen him to be one of His messengers,

He tells him to go to the pharaoh and tell him about Islam so he will free His servants. Prophet

“My Lord, expand [i.e., relax] for me my breast [with assurance]. And ease for me my task. And

untie the knot from my tongue. That they may understand my speech. And appoint for me a

minister [i.e., assistant] from my family.

Aaron, my brother. Increase through him my strength. And let him share my task. That we may

exalt you much. In addition, remember you much. Indeed, you are of us ever seeing.” Surah Ta-ha:

“You have been granted your request, O Moses. And We had already conferred favor

upon you another time When We inspired to your mother what We inspired, [Saying], ‘Cast him

into the chest and cast it into the river, and the river will throw it onto the bank; there will take him

an enemy to Me and an enemy to him.’ And I bestowed upon you love from me [835] that you would

Here, Allah explains to prophet Musa that he gave Musa exactly what he asked for when he was a

a child when Musa didn’t even ask for it, so Musa shouldn’t doubt for a second that Allah won’t give

him what he wants now, especially when he is asking for it.

6- When prophet Musa was commanded by Allah

to leave Egypt and go to Palestine with the children of Israel, the pharaoh and his army intended to

attack them and overtook them at sunrise right by the Red Sea. “When the companies saw one

another, the companions of Musa said, “We are surely overtaken!” (26:61) to which Musa replied,

Prophet Musa’s trust in Allah is clear throughout his life.

When he tells his companions that Allah is with him, he knows with a clear conviction that he

doesn’t have to worry because he has Allah. Musa was put in situations where he felt trapped,

hopeless, and felt as if there were no possibilities in sight. And although Musa didn’t know-how

Allah was going to relieve him from his difficulties, he knew that He would.

7- A lesson that we can learn from Prophet Musa

is that Allah may withhold something from us, only to give it back to us. He took Musa from his

mother but returned him to her as He promised. sent a believer to advise Musa to flee Egypt, only

for Musa to return as His messenger.He put Musa and the children of Israel before the Red Sea with

the pharaoh and his troops overtaking them, only to eliminate them.

The story of Prophet Musa teaches us the importance of two of Allah’s names:

Al-Qaabid: The Withholder, The One who constricts the sustenance by His wisdom and expands

and widens it with His Generosity and Mercy.

Al-Bassit: The One who amplifies all abundance, who makes the very wide open. He gives plentifully

to whoever He wills and reaches out a helping hand to all of mankind, Allah gives His provision and

mercy as He wishes.

So whatever situation you are in, however hopeless you may feel, put your trust in Allah. He will test

you with what you love. And He will guide and see you through. He will save you and He will

provide you with what you do not expect.

God Almighty described the Qur’anic stories as the best of stories Allah says in Surah Yusuf: “We

relate to you, [O Muḥammad], the best of stories in what we have revealed to you of this Qur’an”

1-Learn From The Comfort Of Your Home Or At Work – Only A Mic, PC And Internet Are Required.