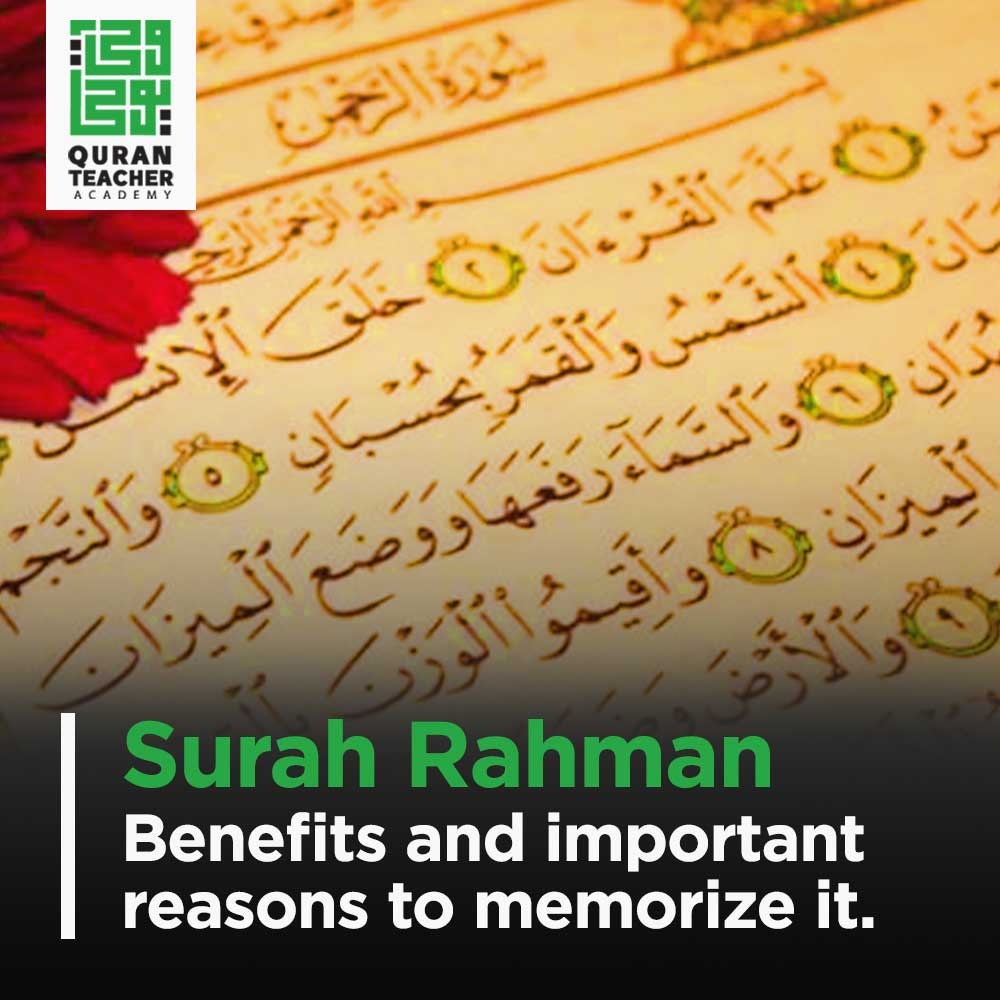 Surah Rahman : Benefits and important reasons to memorize it

Surah-Al-Rahman is one of the beautiful and most reciting Surah of the Holy Quran. It is the 55th chapter that comprises 78 verses. Most importantly, it widely seeks blessings, solutions, and forgiveness from Almighty Allah. Besides this, highly beneficial and important for life and the afterlife in fact.

This Surah is entitled Al-Rahman, the word with which it begins. This title, however, deeply relates to the subject matter of the Surah too, for in it, from the beginning to the end, the manifestations, and fruits of Allah's attribute of mercy and grace have been mentioned.

Surah-Al-Rahman is one of the beautiful and most reciting Surah of the Holy Quran. It is the 55th chapter that comprises 78 verses. Most importantly, it widely seeks blessings, solutions, and forgiveness from Almighty Allah. Besides this, highly beneficial and important for life and the afterlife in fact.

This Surah is entitled Al-Rahman, the word with which it begins. This title, however, deeply relates to the subject matter of the Surah too, for in it, from the beginning to the end, the manifestations, and fruits of Allah’s attribute of mercy and grace have been mentioned.

the commentators hold a view this is a Makki Surah and with regards to its subject matter, it has more resemblance with the Makki Surah. Even revealed in the early days of Islam or the Makkah period. Furthermore, this claimed gained additional strength from the narration of “Hazrat Asma” daughter of first caliph Hazrat Abu Bakar (may Allah bless them both). She said, “I saw the Messenger of Allah offering his Prayers in the sacred precincts of the Kabah facing the corner in which the “Black Stone” is fixed. This relates to the time when the Divine Command, fasda bi-ma tumar (“So, proclaim publicly, O Prophet, what you are being commanded”) had not yet been revealed. The polytheists at that time hearing the words, Fa-biayyi alaa’i Rabbi kuma tukadhdhi ban, being recited by him in the Prayer”. This indicates that this Surah was revealed even before Surah Al-Hijr.

A more authentic justification for proclaiming Surah Al-Rahman a Makki Surah was narrated by Tirmidhi, Hakim, and Hafiz Abu Bakr al-Bazzar from Hadrat Jabir bin Abdullah. Their tradition contains these words: “When the people kept silent on hearing the Surah Al-Rahman, the Holy Prophet said ‘I recited this very Surah before the jinn in the night when they had gathered together to hear the Quran. They responded to it better than you have. As I recited the Divine Words, Fa bi ayyi alaa’i Rabbikuma tukadhdhiban (“O jinn and men, which blessings of your Lord will you deny?”) they would respond to it, saying: O our Lord, do not deny any of your blessings Praise is for You alone’!”

Subject and theme of Surah al-Rahman

This is the only Surah in which almighty Allah addressed both men and jinn, who are the other creatures on earth and endowed with freedom of free will and any possible action. In this Surah, both men and jinn have been made to realize the following

aware of the best results of His obedience.

Though in the commencement of the Surah the address focus only on human beings, for to them only belongs the viceregency” of the earth, among them, and in their tongues only have the Divine Books revealed, yet from verse 13 onward both the men and the jinn addressed and one and the same invitation has been extended to both.

Saying of Prophet Muhammad (ﷺ) in favor of Surah Al-Rahman

One of two Hadith in favor of Surah Al-Rahman was narrated above in the subject and theme matter of Surah al-Rahman section and next one is as follow; “Abdullah Ibn Mas’ud (Radi Allahu Anhu) reported that the Prophet (ﷺ) said, ‘Everything has an adornment, and the adornment of the Quran is Surah Ar Rahman’ (Reference: Imam Bayhaqi (Rahmatullah Allaih) in Shuab Al Imaan).

Allah has showered His countless blessings on an entire human race.

generally and more specifically on Muslims by the revelation of the Quran. Moreover, in Quran, Almighty Allah becomes more generous to those who read and memorize Surah al-Rahman on daily basis. This divine Surah has numerous virtues, i.e. both spiritual and physical that can be seen in this materialistic world.

The spiritual significance of Surah Al-Rahman

As the reading of the Holy Quran is one of the best religious obligations in Islam.

Besides, it has infinite rewards and virtues.

Certain chapters and verses from the Holy Quran have exceptional gratuities for an individual.

who recites them frequently. Surah Rahman is one of them.

There are special rewards from Allah for reading this Surah on unique occasions.

One of the spiritual benefits of reading and memorizing Surah Al-Rahman.

on a daily basis after Fajar prayer is to have a clear heart from the evil of hypocrisy.

In addition, the Recitation of Al-Rahman will also serve as a source of comfort and relief on the Day

of Resurrection. when everyone would be desperate for even the minutest of good deeds.

An individual who develops a habit to read this Surah feels much more protected and blessed by Almighty Allah. Even, a stronger relationship develops between the Creator and a person who read and learns this magnificent Surah by heart. Even though there are unlimited rewards and virtues for reciting. Above all, if somebody is unable to read Surah Al-Rahman.

he can listen to this Surah as it has a mind-blowing positive impact on the human body.

Likewise, our hearts and minds are always in a state to perceive contentment and satisfaction from the surroundings. As we are all living in an avaricious world where worldly.

lust and gains seem to be the only source of the console for an individual.

In this scenario, an individual can gain true conciliation by memorizing and recitation of Surah Al-Rahman.