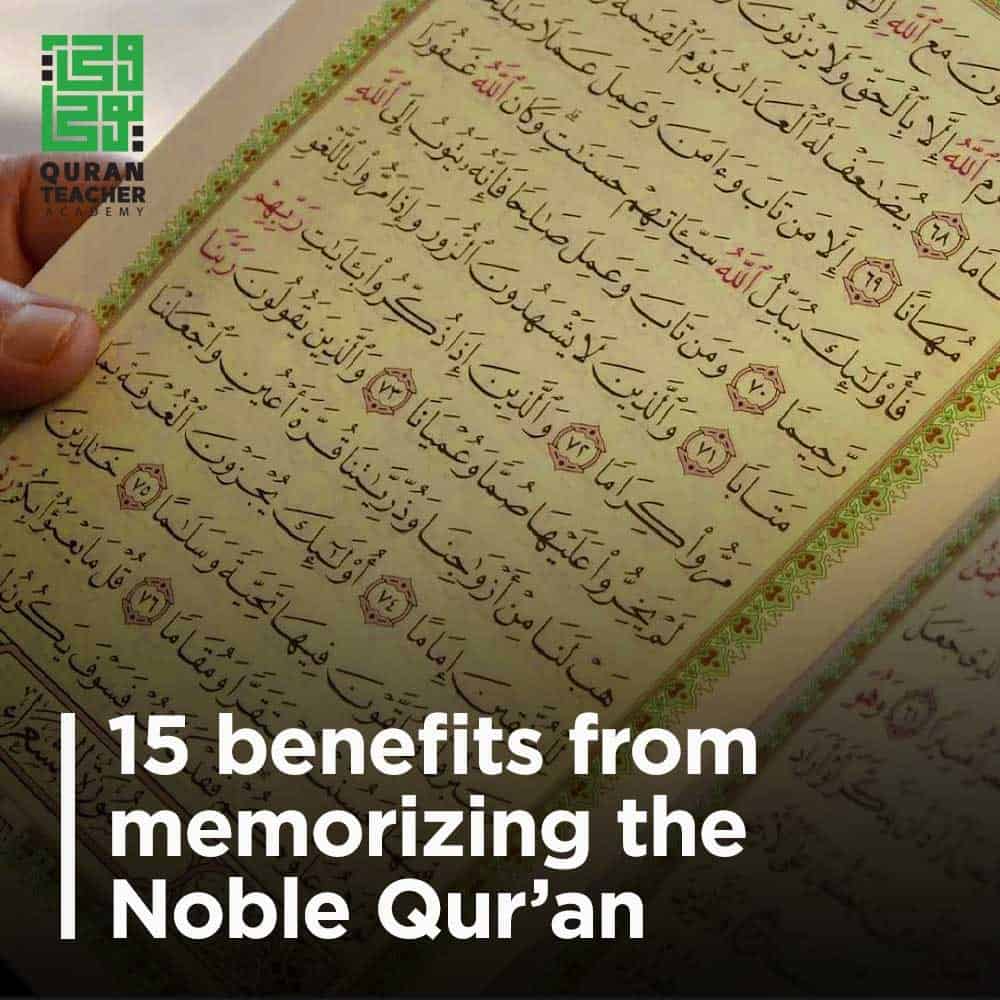 God Almighty facilitates the recitation and memorization of the Noble Quran. God Almighty said: (17) “And we have certainly made the Holy Quran easy for remembrance, so is there any who will remember?” What about The Hafiz (guardian) or (memorizer) of the Book of God Almighty?

1) Whoever memorizes the Noble Quran and acts upon it,

Allah will reward him greatly so that he will rise in status in Paradise to a level commensurate with what he .........

God Almighty facilitates the recitation and memorization of the Noble Quran. God Almighty said: (17) “And we have certainly made the Holy Quran easy for remembrance, so is there any who will remember?”
What about The Hafiz (guardian) or (memorizer) of the Book of God Almighty?

1) Whoever memorizes the Noble Quran and acts upon it,

Allah will reward him greatly so that he will rise in status in Paradise to a level commensurate with what he memorized of the Book of Allah. Abdullah ibn Amr narrated that the Messenger of Allah said: “The Hafiz-e-Quran (a person who has memorized Quran) will be said on the Day of Judgment: Recite and rise in status, recite as you used to recite in the world, for your status will be at the last verse that you recite.”

2) Holding fast to both the Noble Quran and the Sunnah

is the way through which we can guarantee our salvation. The prophet said “I leave among you two weighty things, the Book of Allah and my Progeny; if you hold fast to them you will never go astray, these two shall never separate from each other till they meet at the heavenly fountain of Kawthar (river in paradise).

3) The house of the Prophet and the Companions themselves

were known as the walking and talking Qurans and, being our role models in every aspect of life, we all desire to emulate them. We can emulate them in this regard by incorporating the word of Allah into our daily lives and actively seeking to familiarize ourselves with His book.

4) It contains the sciences of language, rhetoric, and the stories of the ancients,

and from every useful knowledge, we find in it an abundant sea. We will understand both contemporary and historical issues in the religion of Islam.

5) Memorizing the Noble Quran is a blessing and leaving it is a regret,

and whoever abandons the recitation of the Noble Qur’an will miss a great reward.

6) When a reciter of the Quran enters into Heaven, it will be said to him:

‘Go up one level for every verse that you can recite.’ Prophet Muhammad (s) has said, “The number of levels in Heaven is (equivalent to) the number of verses in the Quran. Thus, no one will be in a higher level than the one who has memorized the entire Quran.” Imam Ali (as) has also said, “Recite the Quran and seek assistance from it for surely Allah the Highest will not punish one who has memorized the Quran (and has it within one’s heart).”

7) When acting upon its teachings, it will purify our soul:

Ibn ‘Umar reported God’s messenger as saying, “These hearts become rusty just as iron does when water gets to it.” On being asked what could clear them he replied, “A great amount of remembrance of death and recitation of the Quran”. We are always looking for ways to enhance our spirituality and form a connection with our Creator and there is no better way to do this than through His words themselves. As Imam Ali (as) has said, “When I wish to converse with Allah, I pray. When I wish Him to converse with me, I read the Quran.”

of our Lord Allaah Almighty and of our true purpose in the world. Consistently reading it will keep us from being forgetful and negligent. If you have memorized the verses of the Quran, you have the advantage of being able to recall them at any moment during your day, whether you have a copy of the Quran with you or not.

9) Increase our knowledge: as we live in an era where Islam is becoming strange,

the fear of, hatred of, or prejudice against the religion of Islam or Muslims (Islamophobia). It’s necessary to be well informed about our religion so that we may be able to defend it. Also to learn how to answer questions about our beliefs. Being familiar with the Quran and Sunnah will give you the upper hand in discussions, and allowing you to refute those that accuse Muslims or beliefs.

10) Improving your understanding of the Arabic language.

If you are not an Arabic speaker but consistently reading, listening, and memorizing the verses of the Quran in Arabic with an accompanying English translation. You will pick up words and sentences that allow you to better understand the Arabic language, you will be able Insallaah to understand Arabic used in Dua (supplications), Hadith (narrations), Sermons, Religious Books, etc.

“He who does not memorize any part from the Qur’an he is like the ruined house.”
Don’t underestimate the power of a good deed no matter how small it seems.
A single good deed done with pure intentions can change the trajectory of your life and secure your eternal prosperity in the hereafter.

12)The Quran is a cure for physical and mental illnesses:

Allah’s saying in Surah Al-Isra: (82) “And We send down of the Quran that which is healing and mercy for the believers, but it does not increase the wrongdoers except in loss.”

13)The Hafez of the Qur’an is the first person to lead the Imamah Messenger of Allah (ﷺ) said,

“The person who is best versed in the recitation of the Book of Allah should lead the prayer.” And remember that prayer is the pillar of religion and the second pillar of Islam
Salat is Allah’s gift to you so don’t approach it as a mundane chore.
Salat is what keeps you grounded during the ups and downs of everyday life.
Without salat, you’re disconnected from the source of all stability.

14)Great reward from God Almighty Whether you are skilled or at the beginning of memorizing:

‘Ā’isha reported God’s messenger as saying, “One who is skilled in the Qur’ān is associated with the noble, upright recording angels; and he who falters when reciting the Qur’ān and finds it difficult for him will have a double reward.”
“Know that the world is a place of trial wherein there is no time a person can afford to be idle, for that time will be a source of regret for him on the Day of Resurrection.”- Imam Ali

continuity, persistence, and dependence on God only.
Stress is a direct consequence of relying on our own efforts. But who said you were supposed to take on life alone?! You have Allah. Therefore, strive with your limbs but let your heart be at peace knowing that He controls the outcomes.