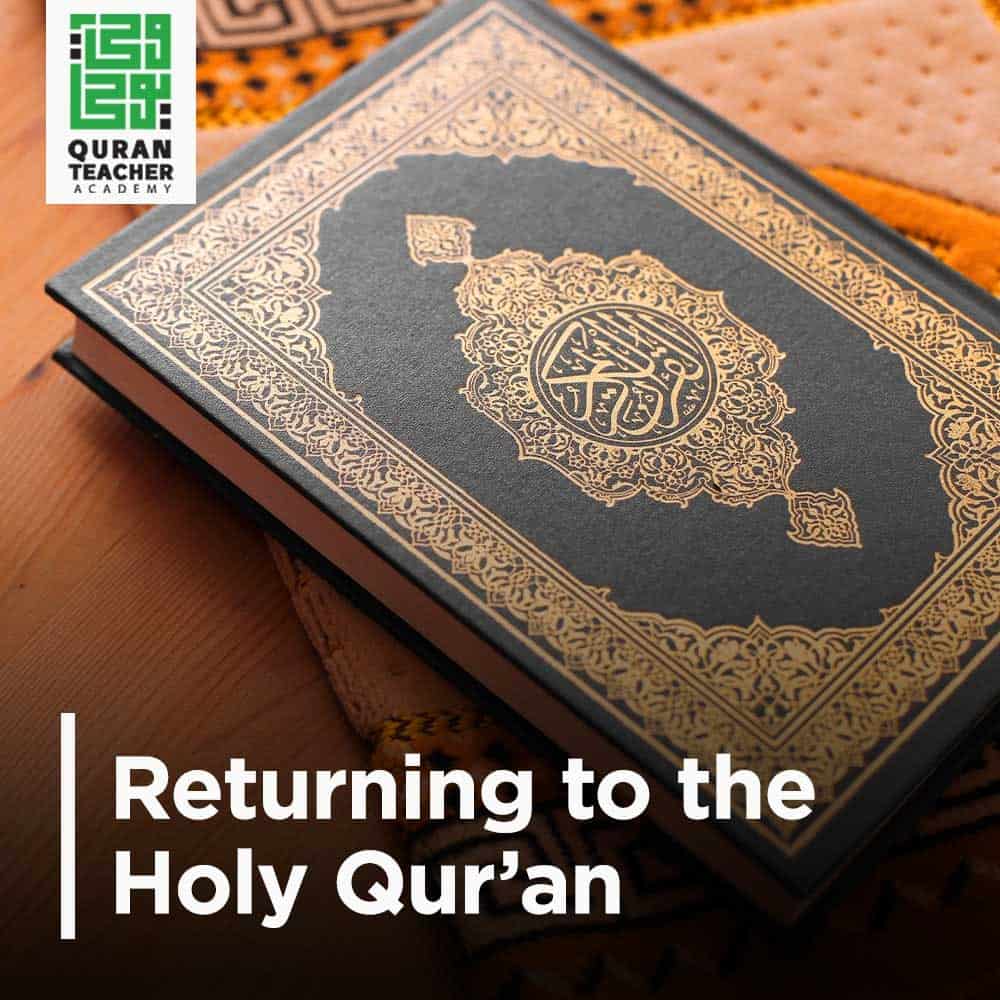 Returning to the Holy Quran

Quran "It is a mighty Book.”

1- Holy Quran is the word of God that He revealed to His Prophet Muhammad, Peace be upon him,

to bring people out -of darkness into light, by obeying their Lord, to the right path of the Mighty.

Quran “It is a mighty Book.”

1- Holy Quran is the word of God that He revealed to His Prophet Muhammad, Peace be upon him,

to bring people out -of darkness into light, by obeying their Lord, to the right path of the Mighty.

“Allah is the Wali (Protector or Guardian) of those who believe. He brings them out from darkness

into light. But as for those who disbelieve, their Auliya (supporters and helpers) are Tâghût [false

deities and false leaders], they bring them out from light into darkness.” Al-Baqarah257

The Quran derives its glory, greatness, and loftiness from the greatness and majesty of the one who

speaks it, and that is God the Mighty and Sublime. “a Book (this Quran) from Allah confirming

2-  It is unreasonable for people to stray from the source of guidance, that is the Book of God, so we

path to it, we are truly walking the path of restoring balance and tranquility to the soul that inhabits

the bodies! This is the first path for reformation. The first way to reconcile with the Quran is to

deceive yourself by reciting the Holy Quran a lot, a recitation not like the previous recitations, a

with anything other than the Holy Quran. And whoever is stingy, he is stingy on himself!

may reflect on its verses. And so that those who are endowed with understanding may [heed its

admonition and] be ever mindful [of its commandments]. Surat Sad38:29

4- It is necessary to choose the times of recitation, and the best time when the Presence of the Heart.

We suffer in the age of Materialism from overturning the facts of the universe. Absolutely, the night

is night, and the day is the day. Isolate yourself with the book of God Almighty in the darkness of

the night, and recite what you memorized, be the one of those who recite the Book of God at night.

“Not all of them are alike; a party of the people of the Scripture stand for the right, they recite the

Verses of Allah during the hours of the night, prostrating themselves in prayer.” Āl-‘Imrān113

5- The second way to reconciliation is understanding the words of the Quran, that a person will not

take pleasure from words that he cannot understand its meanings, and that is why God Almighty

understand the meanings of the Holy Quran, but hearts that are bound by sins are still crawling

their first steps! “Nay! But on their hearts is the Ran (covering of sins and evil deeds) which they

said, “When a slave (a person) commits a sin (an evil deed) a black dot is dotted on his heart. Then if

that person gives up that evil deed (sin), begs Allah to forgive him, and repents, then his heart is

cleared(from that heart covering dot); but if he repeats the evil deed (sin), then that covering is

increased till his heart is completely covered with it. And that is AR-Ran which Allah mentioned (in

Before memorizing it, we first implemented it in our lives and our conduct. This came as a direct

Muhammad ﷺ: Iqra’, Read! In the Name of your Lord Who has created (all that exists).

Despite the widespread means of printing and publishing that have made writing, reading, and

listening to the Quran easy and broadly available, Muslims yet became disconnected from the Book

of Allah in their day-to-day

affairs. The majority of Muslims limited their engagement with the Quran to an occasional

proper understanding or reflection on its meanings.

Why many of us do not reflect upon the Quran, as Allah charges us to do, and we fail to relate what

we have read in its sign-verses to our own lives?!

I think the reasons are almost linked to the corruption of our senses and cognitive faculties. By

correcting some of these problems, we Muslims can again reap the reflective benefits of the Holy

Quran in our lives, which will permit the Quran to true our souls Insha’Allah.

This is the key to enriching our lives, as personal worshipers and as a global Muslim Ummah, here

To benefit from the Gracious Quran in our lives

• We need to liberate our senses and cognitive faculties; our senses of sight and hearing, heart and

“And Allah has extracted you from the wombs of your mothers not knowing a thing, and He made

for you hearing and vision and hearts [i.e., intellect] that perhaps you would be grateful.” An-Nahl78

provocations, images, bits of information, and all that is, to know, part of man’s cultural and social

environment. So, it’s important to pick what is good and avoid what is harmful.

• The habit determines our personality: we need to train to learn how to detect and sort out the

things that are reaching our senses and cognitive faculties, for the ‘inspirations’ that shape our

mindset and affect our decisions and attitudes in life. ‘A’isha reported God’s Messenger as saying,

“The acts most pleasing to God are those which are done almost continuously, even if they amount

to little.” (Bukhari and Muslim.)

• We should willing to renounce arrogance, lethargy, and self-deception, and to confront ourselves

with the truth by realizing the following verse of the Quran, in Surah Al-Mu’minūn Ayah 115, Allah

shall say on the Day of Judgment to the doomed: “Did you think that We had created you in play

(without any purpose) and that you would not be brought back to Us?”