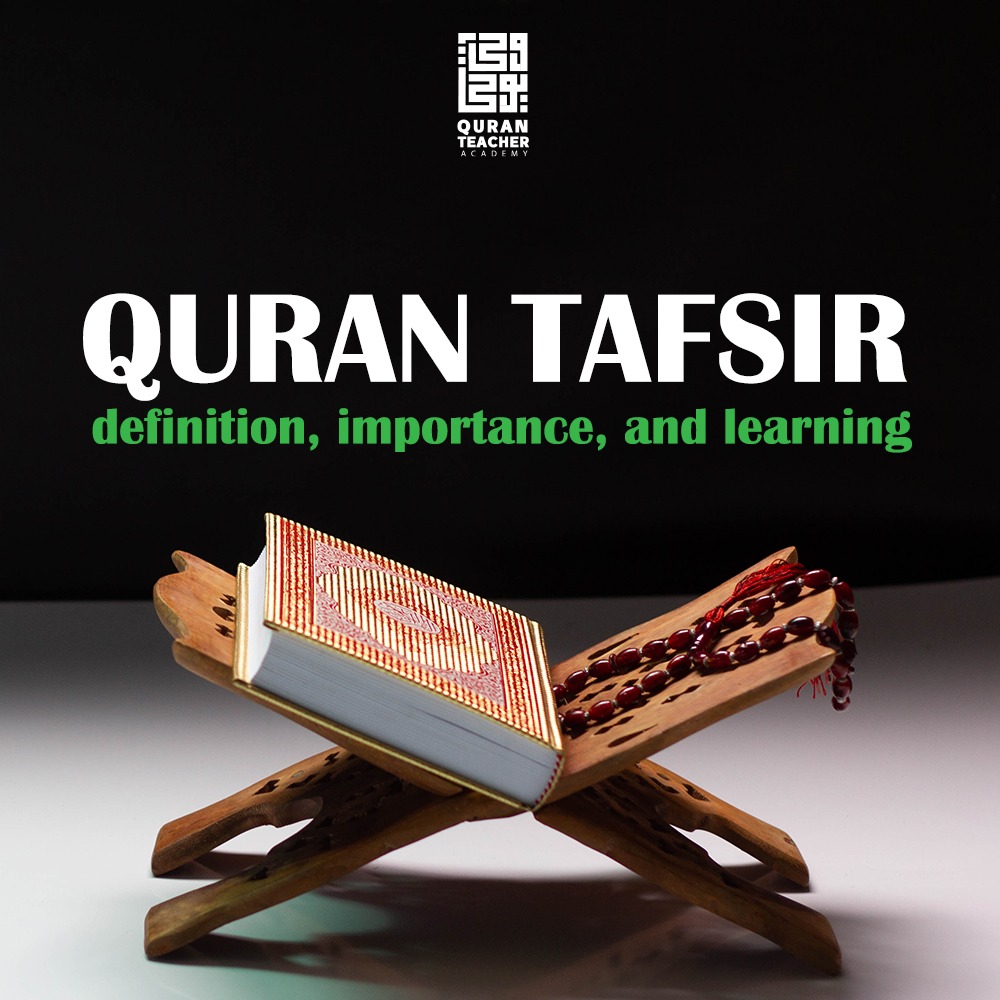 upon the Quran correctly in a manner that pleases Allah سبحانه وتعالى. Tafsir and Ta’wil are very close

1- Tafsir literally means ‘opening’, ‘explanation’, ‘to elaborate’, to explain in detail’. Therefore, when

of the Noble Quran.

Ta’wil is a different dimension of Tafsir, it means the interpretation of the inference of those Ayahs

like; what are those words implying, how many other lessons do they have for us because every

a single word of the Holy Quran has thousands of implications, meanings, and different lessons that

could be extracted from it.

Who is the Mufassir of the Quran?

Mufassir is the author of a Tafsir and he is commenting on the Holy Quran. When someone teaches

understanding of the Quran, he is just translating it from Arabic to English. Mufassir is the person

who wrote the initial work of it.

The implications of The Quran Tafsir

When we study the Tafsir it is really important to understand the implications of Tafsir.

The meanings, laws, and injunctions of the Holy Quran are explained via the science of Tafsir.

Laws are derived via the science of Tafsir. For example, when we look throughout the Holy Quran,

we don’t find a detailed breakdown of the Sunnah method of Wudu’, the number of Rakat of Witr or

Zuhr or Asr salah, all rules of fasting for example if the liquid has to go into a person’s ear what is

the number of fast the person must keep if he does this, or if he breaks a fast because of certain

reasons what must he do. we will not find many of the rules clearly mentioned in the Holy Quran.

we receive those instructions via the science of Tafsir.

The science of Tafsir is greater than we imagined, it is explaining Islam and it preserves the message

of the Holy Quran!

The Authoritative commentators of the Holy Quran

Ibn ‘Abbas reported God’s messenger (ﷺ) as saying, “Let him who interprets the Quran in the light

of his opinion come to his abode in hell.” A version has, “Let him who interprets the Quran without

knowledge come to his abode in hell.” Tirmidhi transmitted it.

In addition, Abu Huraira reported God’s messenger as saying, “Disputation about the Quran is

1- The most authoritative commentary of the Holy Quran is the prophet Muhammad (ﷺ). The

statements of the Prophet, his words, his actions all of these are coming together to be the most

authoritative commentary of the Holy Quran. If the prophet has mentioned Tafsir of a specific verse

that means nobody can contradict what he said or question why he said so or say I have an opinion.

spoke, he spoke with the permission of Allah. Everything he says is from Allah Almighty.

“Nor does he speak from [his own] inclination.”

Bakr, Umar, Uthman ibn Affan, and Ali. These four caliphs were the closest of Sahaba to the

Their commentary of the Quran also takes precedence over any other person’s commentary. The

four Sahaba hold authority and positions of great merit when compared to the rest of the Ummah.

They are the authoritative commentators of the Quran.

The definition of Sahaba is important. As- Sahaba is meaning the companions and the followers of

4- Al Tabi’un: Those who learned from the Sahaba of the prophet (ﷺ). Thus, they received their

learned the Tafsir, Hadith, and Islamic law from them.

Sources of The Quran Tafsir

1- The first source of Tafsir is the Holy Quran. As the Quran explains itself.

Every word of the Quran comes from Allah and Allah Almighty is explaining. Let us assume the fifth

Ayah of a Surah is read and we do not know the meaning but somewhere else, we come along and

find another Ayah explaining that one. It is Allah Almighty who is explaining and He is giving us the

Tafsir of that verse.

2- The verses of the Quran take precedence over other sources of Tafsir.

3- Hadith: The words and actions of the prophet Muhammad (ﷺ)

In addition, Hadith must be verified

4- The statements of Sahaba: Acting contrary to the consensus of the Sahabah is not permissible. Is

the case when opinions differ, the principles of Hadith and Quran Tafsir will be used?

5- The statements of Al Tabi’un: Those who learned from the Sahaba of the prophet (ﷺ).