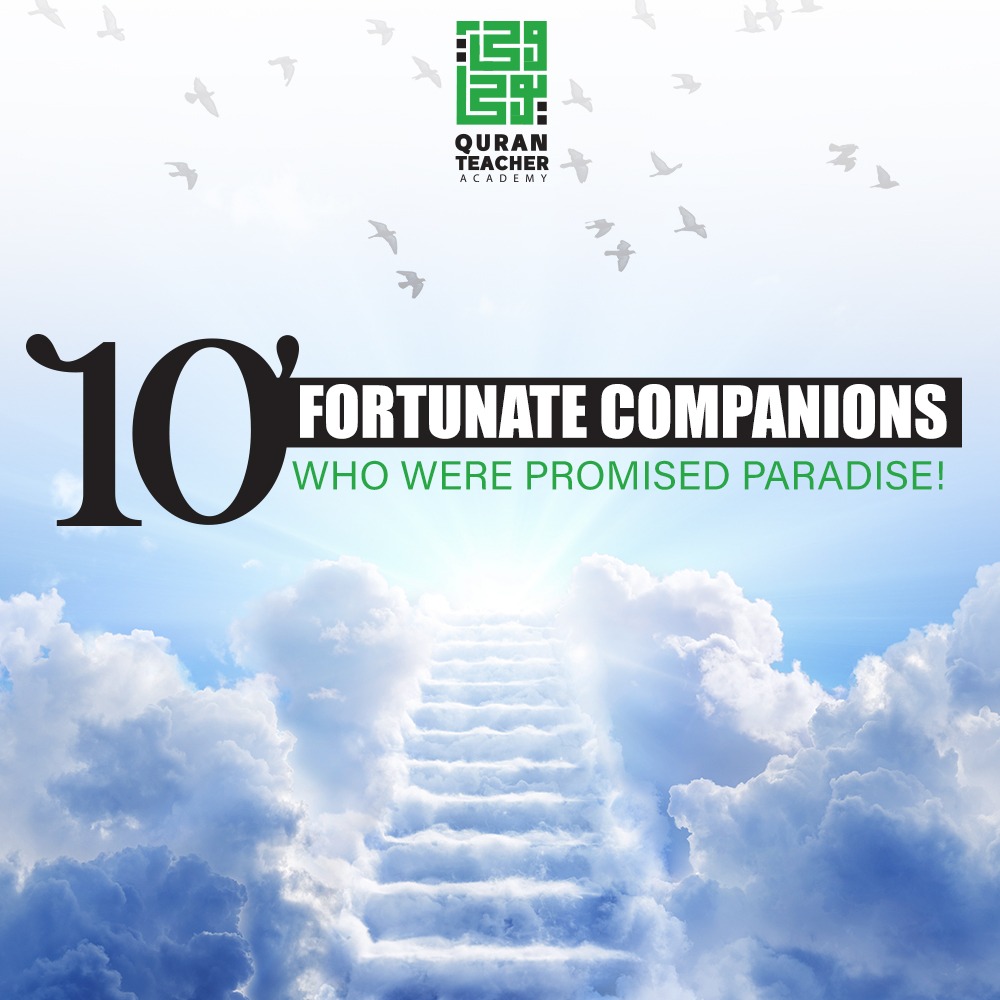 Ten fortunate Companions who were promised Paradise! “O you who have believed, do not consume usury, doubled and multiplied, but fear Allah that you may be successful. And fear the Fire, which has been prepared for the disbelievers. , obey Allah and the Messenger that you may obtain mercy. And hasten to forgiveness from your Lord and a garden [i.e., Paradise] as wide as the heavens and earth, prepared for the righteous Who s .........
Ten fortunate Companions who were promised Paradise! .........

“O you who have believed, do not consume usury, doubled and multiplied, but fear Allah that you

And fear the Fire, which has been prepared for the disbelievers.

, obey Allah and the Messenger that you may obtain mercy.

And hasten to forgiveness from your Lord and a garden [i.e., Paradise] as wide as the heavens and

earth, prepared for the righteous

pardon the people – and Allah loves the doers of good;

And those who, when they commit an immorality or wrong themselves [by transgression],

remember Allah and seek forgiveness for their sins – and who can forgive sins except Allah? – And

[who] do not persist in what they have done while they know.

Paradise], wherein they will abide eternally, and excellent is the reward of the [righteous] workers.”

What a reward that Allah عزوجلdescribed as: “Excellent reward for the righteous workers”!!

What do you think of a reward with this description??

The previous verses have changed the Prophet’s companions and also changed their followers. We

have to change by hearing them as well.

In those verses, Allahعزوجل orders us to hasten to His forgiveness and welfare. The Prophet’s

companion’s رضى الله عنهم did hurry up to practice gracious actions. Whenever they heard about

anything descending on the prophetصلى الله عليه وسلم; they hurried up to it.

the Prophet صلى الله عليه وسلم to complain about their rich fellows, what a complaint!

They complained that the rich companions surpassed them with their properties and wealth. They

came to the Prophet and said:

and fast as we do. They have more money by which they perform the Hajj, and `Umra; fight and

struggle in Allah’s Cause and give in charity.” The Prophet said, “Shall I not tell you a thing upon

which if you acted you would catch up with those who have surpassed you? Nobody would overtake

every (compulsory) prayer.” We differed and some of us said that we should say, “Subhan-al-lah”

They did so! But the wealthy companions heard the poor ones repeating these Zikr and they

They returned back to the Prophet صلى الله عليه وسلم complaining ‘O Messenger of Allah; our rich

brothers heard us and they did the same!’

He said: “That is the bounty of Allahعزوجل, which He gives to whom He wills.”

O Muslim! Look at this competing and hastening! They are racing in righteous deeds for the sake of

Now, Do we really care about these words of Zikr after each prayer like the Prophet’s companions?

Yes, whoever sticks to Zikr and cares regularly about them, can have the same reward as those

Yes, they used to hasten and complete the Prophet’s commandments because their goal was

paradise, not this perishable world.

Ask Allahعزوجل to honor you with an understanding of what those men understood, and to help you

hasten and compete in good deeds and rewards and blessings to let you enter paradise.

companions, and work as they worked, Allah said:

“Those are the ones whom Allah has guided, so from their guidance take an example.” Surah Al-

much as one much on behalf of one of them or half of it.”

Ten Companions of the Prophet who were promised Paradise!

Ten special fortunate companions who, through their special deeds and unlimited sacrifices,

attained the good news of Paradise in this worldly life from the Prophet Muhammadصلى الله عليه وسلم.

The closest companion of the prophetصلى الله عليه وسلم.

His full name is Abu Bakr Abdullah ibn Uthman Abi Quhafa, was through his daughter Aisha, a

father-in-law of the Islamic prophet Muhammad, as well as the first caliph of Islam. He is known for

the honorific title Al-Siddiq by Muslims. He accepted Islam without any hesitation and was

considered the first adult to convert to Islam. promised Paradise

Umar was known as Faruq Omar, was the second Rashidun caliph. He was one of the most powerful

and influential Muslim caliphs in history. He was a senior companion and father-in-law of the

The Islamic prophet Muhammad. He succeeded Abu Bakr as the second caliph of the Rashidun

was known as Jun-Nurain (possessor of two lights). He was the third caliph of Islam. Uthman

was the one who gave the most in various jihads. He rebuilt the Masjid Al-Nawabi. promised

Ali was known as Abul Hasan, Asadullah. He was the cousin of the Prophetصلى الله عليه وسلم.

Among the young men, Ali was the first to convert to Islam. He was a fearless warrior. The Prophet

صلى الله عليه وسلمgave him a sword named ‘Zulfiqar’ for his heroism in the battle of Badr.

Talhah ibn Ubayd-Allah was a companion of the prophet Muhammad. He is best known for his roles

Zubair ibn al-Awwam had the title of ‘Hawari’ of the Messenger. He was one of the first who

converts to Islam. He became one of the political and military leaders of the community following

the death of Muhammad.

Abdur Rahman was one of the first six people to convert to Islam. Despite being a very wealthy

businessman, worldly life could not attract him, He used to spend a lot of money in wars.

His nickname is Abu Ishaq. He is best known for leading the Persian conquest. He was sent to China

on a diplomatic mission. And in the battle of Badr, Sa’d fought with great courage.

Sa’d was one of the soldiers who devised a strategy to protect the Prophetصلى الله عليه وسلم, in spite of

of Bilal (The first mu’azzin in history), he had the good fortune to call to prayer 3 times. He is the

first lucky man to shoot an arrow in the way of Allah.

Saeed ibn Zayd was only twenty years old when he converted to Islam. Even before his conversion to

Islam, he was a ‘Hanif’. That means he was far from paganism at that time.

He is called ‘Amin Al-Ummah’ the caretaker of the Ummah. He was highly respected among people.

During the caliphate of Umar, he died of the plague.