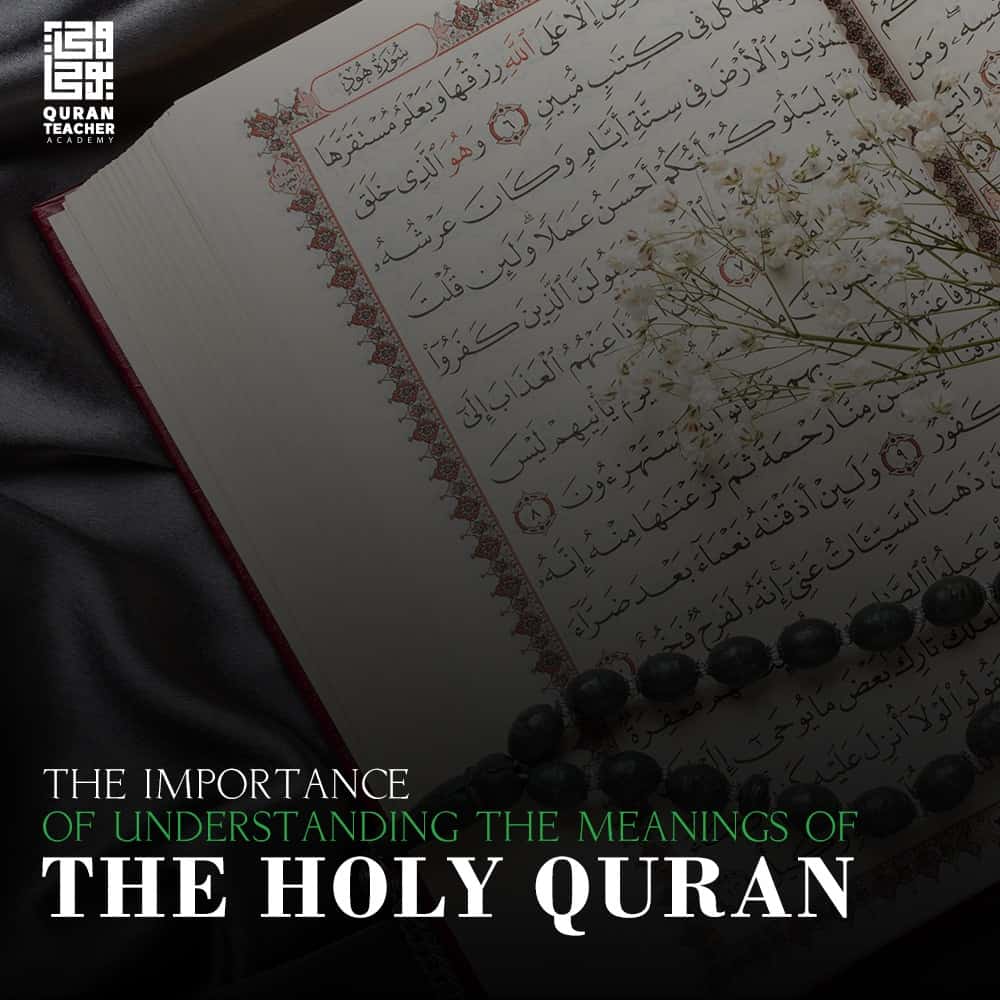 The importance of understanding the meanings of the Holy Quran

How can someone “know how to recite” the Holy Quran and “not understand it” at the same time?

Is it possible to recite without comprehension? If a person can merely reproduce the sounds of a

language without knowing what he is saying, what kind of knowledge does such a person have?

memorization at the expense of teaching the meaning of the text. This imbalance should be

Islam is indeed a much-misunderstood religion and the Holy Quran.

It is not well understood even by a significant

number of Muslims themselves. This incomplete understanding of Islam has had serious

consequences. In an environment of ignorance, fanaticism will thrive.

The best antidote to ignorance is knowledge, the true knowledge of the teaching of Islam, gained

first of all from the knowledge of the Holy Quran.

Muslims believe that the message given to Muhammad,

peace, and blessings be on him, was relayed

to him by the angel Gabriel. Muslims are commanded to submit to the will of God Most High and

not to follow their desires or those of others.

Muslims are commanded to worship no one but God Most High, pray five times a day, be charitable,

fast when required, and complete the pilgrimage if and when they are able to do so. The way of the

Muslims is akin to the way of the People of the Book, the Jews, and those who call themselves

which We have revealed to you, [O Muhammad], and what We enjoined upon Abraham and Moses

and Jesus – to establish the religion and not be divided therein. Difficult for those who associate

others with Allah is that to which you invite them. Allah chooses for Himself whom He wills and

guides to Himself whoever turns back [to Him].” Surah Ash-Shura: 13

Worship (Ibadah) in Islam and teaching the Holy Quran

Allah Most High lays a strong emphasis on worship (Ibadah). He commanded his servants to

worship Him for the benefit of His servants, not for His benefit.
He is free from all needs and does not need anything from His creatures. It is people who need Him.

Most High in worship.

God Most High is unique and there is nothing like Him in the universe or anywhere else.

Shirk is a form of ingratitude and is identified in the Holy Quran as the worst offense.

God Most High forgives all sins other than shirk to whom He pleases.

An equally strong emphasis is placed on belief (Imaan) and good works (Ihsaan). God Most High is

the highest authority and He has power over all things. Nothing in the universe happens without His

It has been argued that faith is more important than good works. Others have argued that go

Islam provides a simple answer to these disputes:

both are important and equally important. Good

actions confirm good words. Good deeds alone – without faith – are not convincing. It is necessary

commanded it. God Most High must be obeyed because He is the highest authority

Faith without good deeds likewise is not convincing. Words alone are not enough to prove that we

are sincere. It is said that “actions speak louder than words.”
Good deeds confirm good statements: they prove that we are serious, that we are willing to “walk

the talk.” The Quran teaches that no one can bear another person’s burdens

You take responsibility for yourself

Everyone is individually responsible for his or her own deeds. This does not mean that Islam teaches

individualism. In Islam, a person is a member of the Muslim community or brotherhood. This does

not mean, however, that his or her individual uniqueness is obliterated by the need to conform to a

stereotype of what it means to be a Muslim

There is room for a great deal of diversity in the Muslim community.

Muslims are also enjoined to be tolerant. We are advised to overlook other people’s faults and

forgive them. This does not mean, however, that we are allowed or even encouraged to overlook

crimes. There is a difference between a moral failing or sin and a crime. While every crime is a sin,

not every sin is a crime. Justice must be administered without regard to a person’s social status or

Muslims are commanded to practice justice in all their relations with others, Muslims and non-Muslims.

God Most High declares in the Quran in Surah l-māidah: “O you who have believed, be

persistently standing firm for Allah, witnesses in justice, and do not let the hatred of a people

prevent you from being just. Be just; that is nearer to righteousness. And fear Allah; indeed, Allah is

acquainted with what you do.”

In the Quran, ihsaan (good works) and Imaan (faith) are invariably mentioned side by side. One of

the most commonly occurring expression in the Quran is, “those who believe and do good deeds.”

God Most High says in the Holy Quran: “The Day (when) He will gather you for the Day of

Gathering, that will be the Day of Mutual Fraud. And whoever believes in Allah and does

righteousness, He will expiate for him his odious deeds and cause him to enter Gardens from

beneath which rivers run, eternally (abiding) therein forever. That is the magnificent triumph.”

The Holy Quran teaches that people who believe in God Most High,

the Day of Judgment, and do

good deeds shall go to paradise. Those who disbelieve and commit wrong go to hell, unless they

repent and mend their ways before it is too late.

God Most High does not forgive those who die in disbelief and commit crimes all their life, and then,

just before they die, say, “Now I repent all that I did”.

The Holy Quran occupies a special place in the lives of Muslims.

creatures. He did not send His revelation to make life difficult for people.

Islam is a simple religion.

Every mature person of sound mind can grasp and practice the

fundamentals of religion. Likewise, the Quran is not difficult to understand and to remember. God

“And We have certainly made the holy Quran easy for remembrance, so is there any who will