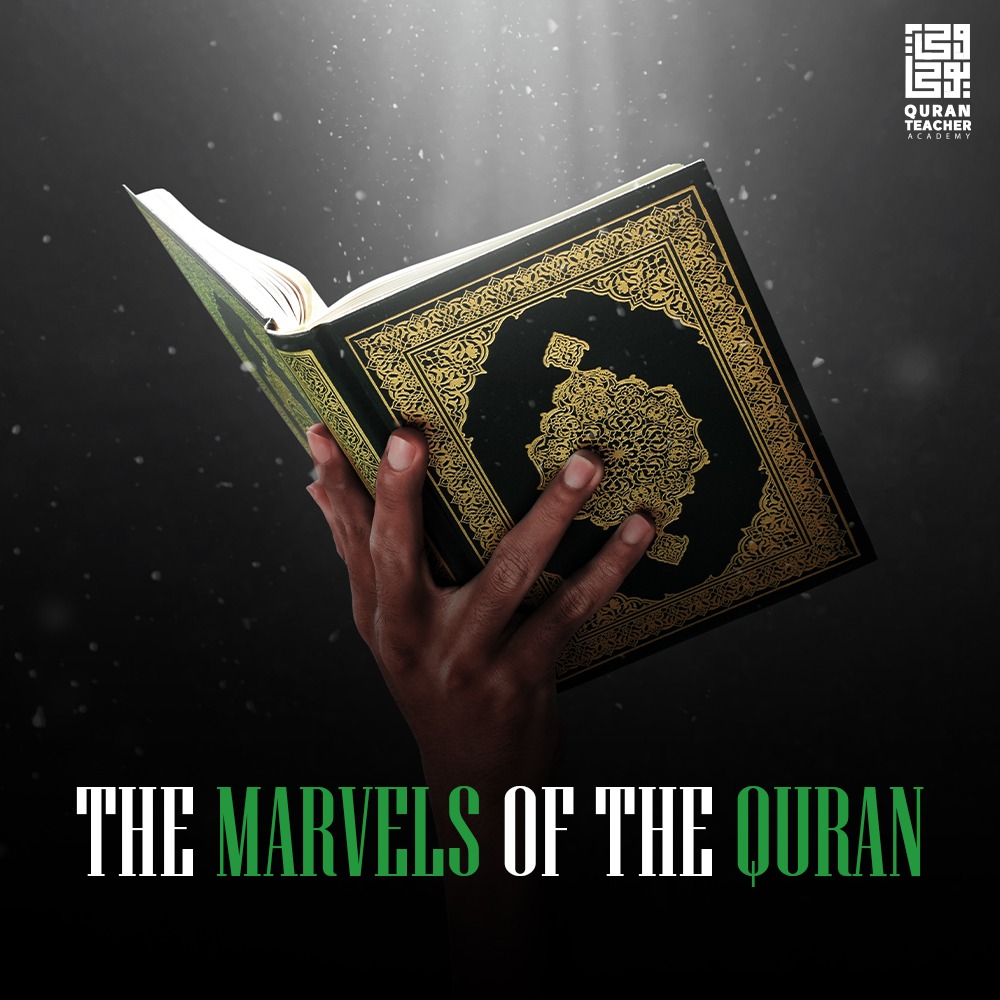 The marvels of the Quran

The marvels of the Quran We place our trust in Allah and seek His protection from the evil of our own self and from bad deeds. One who is guided by Allah cannot be led astray. One who is led astray by Him cannot find any guide. We testify that there is no god besides Allah, the true One. He is without any partner. We also affirm that Muhammad is His servant and messenger. Allah’s blessings are upon him, his family, and his companions. The marvels of the Quran

The marvels of the Quran

We testify that there is no god besides Allah, the true One. He is without any partner. We also affirm

that Muhammad is His servant and messenger. Allah’s blessings are upon him, his family, and his

The marvels of the Quran are inexhaustible. It guides man at every step, catering to his needs and

The miracle of the Quran

It is the Quran alone that enriches us. Let us present before you some gems gleaned from the

treasure-house that is the Quran. Its wealth suffices for the whole of mankind.

Only the Quran can enrich the super-rich, mighty rulers and flourishing business tycoons. It can

change their fortunes. Rather, it can make them rich in the real and abiding sense of the term.

By the same token, those who do not pay heed to it are disgraced by it, rubbing their noses in dust.

For the Quran transformed the pauper Arab Bedouins, without food and clothing to such an

unprecedented height of worldly power and glory. Petty camel drivers were exalted to the rank of

kings and rulers of all parts of the world.

Notorious for their lawlessness and misguidance, they were transformed into the leaders of

They acted as mankind’s saviors. Without the Quran, these Arab Bedouins would have hardly

survived on the world map.

However, in the light of Quranic guidance,

they learned to rule and govern the world. They even managed to trample under their feet the glory

and grandeur of the Persian and Roman emperors of the day.

meditating, wrapped in a sheet. It was he who raised and trained an altogether new community.

world over. Indeed, his companions took over the reins of power from the mighty rulers of their day.

The Quran is capable of achieving such transformation.

Those indifferent to it turn into utter losers. This is the constant divine law. If the Quran is not acted

upon in the right spirit, its bearers are doomed for destruction.

The laws enacted by Allah make no discrimination.

It is common knowledge that laws are to be respected and applied uniformly. The same holds true of

the Quran and divine laws are to be respected and applied uniformly.

Those failing to obtain guidance from the Quran are destroyed in accordance with divine law.

Study the Quran and its norms

The verses quoted above make two significant points: Allah choosing someone and then guiding

him. It is plainly stated that He chooses for Himself whom He wills. He can elevate anyone to this

exalted rank and bless him with His guidance. Nonetheless, guidance is needed by the whole of

Allah guides one who turns to Him in repentance and obedience.

However, one must be a genuine seeker of guidance before one is bestowed with this. One who

displays such humility, self-surrender and total obedience is guided by Allah to the straightway.

The Quran stands out for both its instructions and its emphasis on preaching the truth.

Obligations in the Holy Quran

A believer is obliged to accept all the articles of faith, grasp these and draw these only from the

Quran. The Quran, as we know, is in chaste Arabic. Allah has also declared that He has made its

comprehension easy for those who take admonition. The man should thus take heed from it.

It is easy to understand the Quran in terms of ascertaining the main beliefs it projects, the

conditions for deriving its guidance, and its concepts of monotheism and the Hereafter.

It is not therefore difficult to figure out the Quranic worldview. Nor is it a complicated issue as to

how to attain deliverance in both worlds.

The Quran is explicit and categorical on these issues.

No one can claim that he could not learn about these basic truths after studying the Quran.

Weighty arguments, delivered in unequivocal terms, on the doctrine of monotheism abound in the

Quran. This fundamental truth is articulated effectively and energetically on numerous occasions.

So someone studying the Quran seriously can never indulge in polytheism. One may stumble into

error, commit sins, take to the path of apathy by way of not discharging one’s religious duties, and

indulge in wicked deeds. Yet one cannot misconstrue the Quranic stance on monotheism. For its

message is as clear as sunlight. Nor can one entertain any doubt about this issue.

The same holds true for the doctrine of messenger ship, the duties of this office, the role and

the function of messengers, and their conduct.

For the Quran makes it abundantly clear that they are pious men, having no truck with evil.

The Quran contains their extensive accounts, dispelling all misperceptions about their status.

Surahs al-A’raf, hood, and al-shura deal extensively with almost each and every messenger of

Each of them is introduced and historical evidence is provided about their impeccable credentials.

It is easy to consult the Quran for guidance, no one can contest this truth. However, as to its

complex and specialized contents, one cannot claim finality about one’s interpretation of these. It is

Abu Bakr exclaimed: “O Allah! Which refuge can I have under the sky or to which retreat can I take

shelter, if I make an unsubstantiated claim about any verse of the book of Allah?”

regard to Quranic expression, he supplemented this with a remark, seeking Allah’s protection from any misconstruing.

• One should grasp the essence, spirit, and objective of the Quran.

• One’s attitude in so doing should be marked by the utmost respect and caution.

Even if one cannot decipher all the Quran, yet he may benefit from studying along the proper lines.

• One blessed with the fear and consciousness of Allah is thus more likely to derive benefits from it.

When the Quran is recited before God-fearing people, their response, as portrayed in the Quran, is

“If We had sent down this Qur’an upon a mountain, you would have seen it humbled and splitting

from fear of Allah. And these examples We present to the people that perhaps they will give

On reading the Quran,

a pious person is shaken to the core of his being, trembling in awe over the

the realization that he has in front of him the word of Allah.

Such an attitude helps one derive guidance to the highest degree.

It’s useful too, to learn Quran from a qualified Quran teacher in order to understand its meanings

and to let yourself engaged with the right memorization with someone who encourages you.

1-Learn From The Comfort Of Your Home Or At Work – Only A Mic, PC And Internet Are Required.