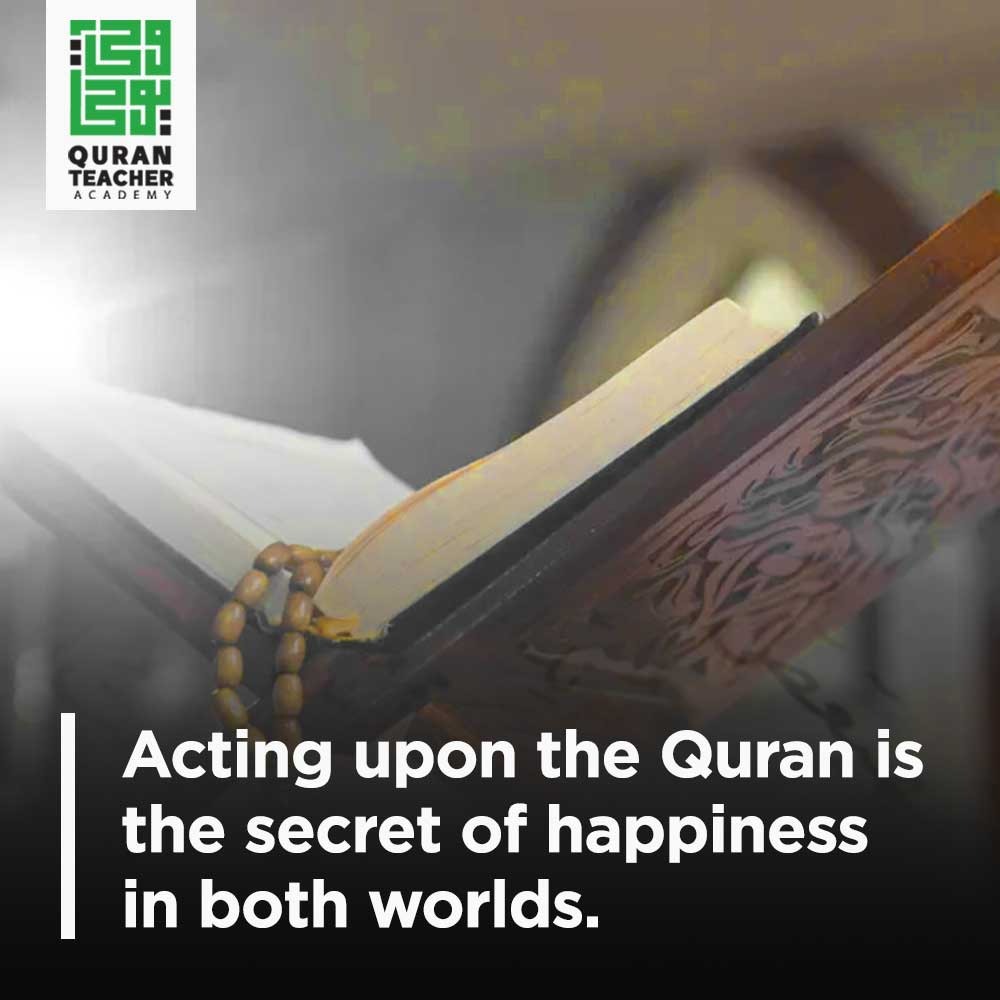 Acting upon the Great Quran is the pinnacle of the rights of the Quran, and it is the main care of the

revelation of the Holy Book,

“And this [Quran] is a Book We have revealed [which is] blessed, so follow it and fear Allah that you

listening to the Tawrah without any action followed, so God the Almighty likened them to donkeys.

He said: “The example of those who were entrusted with the Tawrah and then did not take it on

is like that of a donkey who carries volumes [of books]. Wretched is the example of the people who

deny the signs of Allah. And Allah does not guide the wrongdoing people” Surah Al-Jumu‘ah: 5

Look how bad is the example of people who deny the Ayat of Allah (proofs, evidence, verses, signs,

Revelations)From Abu Ad-Darda who said: “We were with the Prophet (ﷺ) when he raised his sight

to the sky, then he said: ‘This is the time when knowledge is to be taken from the people until what

remains of it shall not amount to anything.” So Ziyad bin Labid Al-Ansari said: ‘How will it be taken

from us while we recite the Quran.

By Allah we recite it, and our women and children recite it?’ He (ﷺ) said:

‘May you be bereaved of your mother O Ziyad! I used to consider you

among the Fuqaha of the people of Al-Madinah. The Tawrah and Injil are with the Jews and

Christians, but what do they avail of them?'”

understanding it, not limiting the Quran for reading only, so they do as the Children of Israel did,

God Almighty said about them:

wishful thinking, but they are only assuming”

Al-Qurtubi – may God have mercy on him- explained: «wishful thinking which is the recitation. »

Most Muslims today – except some people – know nothing about the Quran except its recitation!

The Prophet Muhammad (ﷺ), warned his companions of the actions of a group that would come

after them reciting the Quran, but the recitation does not go beyond their throats, and it remains in

the space of voices without actions. Abu Sai’d al-Khudri heard the Messenger of Allah (ﷺ) as saying:

insignificant your prayers as compared with their prayers. And they would recite the Quran which

(swift) arrow passes through the prey. The archer looks at his arrow, at its iron head, and glances at

its end (which he held) in the tip of his fingers to see whether it had any stain of blood.”

read, understand, and act upon the Quran. The teachings of our true religion and knowledge of the

speech, clarity of logic and illuminates the right path for the future.

Muslims and to be a constitution for their lives to studying it, implement its commands and avoid

its prohibitions. Acting upon the Quran is the secret of happiness in both worlds. This Dunya and

the hereafter, and abandoning acting upon it is the cause of misery and unhappiness.

The Holy Quran is the secret of the light that shines the hearts and faces of the believers.

The virtuous one of the companions of the Messenger of Godﷺ, in the early days of

this nation, he was memorizing only a surah of the Quran and acting upon the Quran».

How do we work upon the Holy Quran?

1- Commitment to the obligatory deeds:

Acting upon the Quran, the obligatory acts which the disobedient punished and the doer is

rewarded. Examples include Salah, fasting, zakat, and other obligations mentioned in the Quran

and are cleared by the Messenger ﷺ Sunnah.

God Almighty mentioned in the Quran many forbidden things that Muslims must avoid, because

of the great harm that they cause to him and society. Among them are things that are forbidden to

The reader of the Quran must be a refined model of good manners, purity of the tongue from

backbiting, gossip, and obscenity, and purity of heart from hatred.

4-Reflection on the stories contained in the Quran:

practical life, so he can manage his affairs and solve his problems, and there are some stories that

teach Muslim good morals, such as learning patience from the story of the Messenger Ayoub,

peace be upon him.

5- The Companions’ dealing with the Quran:

constitution by which they administer all their affairs, as the Companions applied everything that

was mentioned in it, and they did not do any work before they knew its ruling in the Quran, Abu

Abd al-Rahman Al-Salami said, “If we had learned ten verses from the Quran, we would not have

learned the next ten until we knew what was permissible, forbidden, commanded, and prohibited.»

The virtues of memorizing the Quran

Whoever memorizes it and acts upon it, Allah will reward him greatly, so that he will rise in status in

Paradise to a level commensurate with what he memorized of the Book of Allah. Abdullah ibn Amr

narrated that the Messenger of Allah said: “The Hafiz-e-Quran (a person who has memorized it) will

be said on the Day of Judgment: Recite and rise in status, recite as you used to recite in the world,

for your status will be at the last verse that you recite.”When a reciter of the Quran enters into

Heaven, it will be said to him: ‘Go up one level for every verse that you can recite.’

Prophet Muhammad (s) has said, “The number of levels in Heaven is (equivalent to) the number of

verses in the Quran. Thus, no one will be in a higher level than the one who has memorized the

entire it.” Imam Ali (as) has also said, “Recite the Quran and seek assistance from it for surely Allah

the Highest will not punish one who has memorized it (and has it within one’s heart).”

Of the things that help to memorize it, Reading to an elaborated Quran Teacher, because correcting

mistakes takes precedence over memorizing the Quran, and it is incumbent on the learner of the

Quran to realize that he is exposed to mistaken, and his duty when mistakes occur, to learn the

the correct way of reading and master what his sheik or Quran teacher teaches him.

So that It is worth mentioning that (Wahion Youha) is An Online Academy, Where You can:

1- Learn From The Comfort Of Your Home Or At Work – Only A Mic, PC And Internet Are Required.

Difficult To find more Competitive Lesson Prices On The Internet, Yet their Quality Of Teachers Is