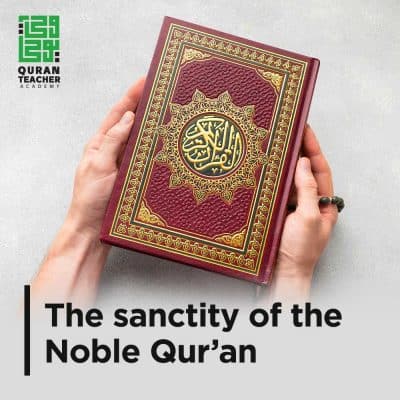 The sanctity of the Noble Qur’an

The Noble Qur’an is the word of God Almighty revealed to His servant and Messenger Muhammad to be a guide and a light for the world until the Day of Resurrection.

and God honored this ummah’s eminence by preserving it in the heart.

working with it in all life’s affairs, and judging by it in little and big. and the grace of God Almighty continues to descend upon some worship;

So they give the Quran its right to glorify and honor one’s sense and meaning.

But there are large sects and great numbers of those who adhere to Islam.

and what came from the Messenger And I fear that the words of God Almighty will truly apply to many of them.

And the Messenger will say,

“My Lord, my people have abandoned this Noble Qur’an. [ Al-Furqan: 30]

Many of them neglected what they were required to do to honor and preserve the Book of God.

They fell short in the field of preservation, contemplation, and work.

and they did not do what was required of veneration and honor for the words of the Lord of the Worlds.

And Muslim countries have spread publications, newspapers, and magazines, and often include verses from the Noble Qur’an on their cover or inside them, but when they read these newspapers, a large portion of Muslims throw them out,

collecting them with garbage and stepping on their feet, and some of them may even use them for other purposes until they are affected by impurities and dirt, God.

Almighty says in his holy book:

It is a noble Quran. In a well-protected Book. None can grasp it except the purified. A revelation from the Lord of the Worlds. (Al-Waqi’ah 77).

And the verse is evidence that it is not permissible to touch the Qur’an unless a Muslim is in a state of purity as is the opinion of the majority of scholars.
In a letter that the Messenger of Allah, ﷺ,

sent to Amr ibn Hazm it said that no one should touch the Qur’an unless he was pure.

And it was narrated on the authority of Salman he said:

On the authority of Saad:

He instructed his son to perform ablution and touch the Qur’an.
If this is about touching the Noble Qur’an, then how about someone who puts newspapers that contain verses from the Qur’an as a meal for his food.

and then throws them into the trash along with impurities and dirt?

There is no doubt that this is a disrespect to the Holy Book of God and his clear words.

So it is the duty of every Muslim man and woman to keep newspapers and books, and other things that contain Qur’an verses or hadiths of the Prophet, or words that mention God, or some of His names, so he should keep them in a pure place, and if they are dispensed with it, bury it in a pure land or burn it, and it is not permissible to be lenient in that.

And since many people are oblivious to this matter, and it may fall into the forbidden due to ignorance of the ruling, I saw the writing of this word; A reminder and statement of what Muslims must act concerning the Book of God, His Names and Attributes, and the hadiths of His Messenger, may God bless him and grant him peace, and a warning against falling into what anger God and contradicts the standing of the words of the Lord of the Worlds.

And God Almighty is responsible for helping us and all Muslims to do what he loves and satisfies, and to protect us all from the evils of ourselves and the sins of our deeds, and to grant us all to glorify his book and the Sunnah of His Messenger, may God bless him and grant him peace, and to act upon them, he is the guardian of that and the one who is capable of it.

prescribed for him is to recite the Qur’an even if he is weak in reading. What is prescribed for a Muslim is to take care of the Qur’an. he recites, he learns, even if he has not a good command of reciting the Qur’an as it should be. because when he continues reading, his reading will improve after Time and time again.

‘Aishah (May Allah be pleased with her) reported:

The Messenger of Allah (ﷺ) said, “The one who is proficient in the recitation of the Qur’an will be with the honorable and obedient scribes (angels) and he who recites the Qur’an and finds it difficult to recite, doing his best to recite it in the best way possible, will have two rewards.”

Because he is striving, he has a reward for his reading, and he has a reward for his labor in that and his diligence in that.
So what is prescribed is for every Muslim man and woman to take care of the Noble Qur’an and to read it a lot, even if with stuttering so that the reading can be correct, to learn that a person reads to his brother.

to his father. to his colleague to a Quran tutor, the people of the Qur’an guide him and even help him.

and the woman also reads to her sister if She was more knowledgeable than her.

or on her mother if she was more knowledgeable than her, or on her father or her husband or her brother or she had a teacher or she would go to her, correctly, until she learned, and if she was distressed, the distress was removed by continuing reading.

Is the reward of listening to the Noble Qur’an the same as one who reads?

We hope you will be rewarded for that and that it is like the reader.

We advise all of our brothers in God, men, and women, to take care of listening to the Quran, reflect, and be reasonable, for he who reads and pondered, and he who does not read hear tapes. This is a great deed. From broadcasting the Qur’an he listens to the benefits, and we hope for him in that great deed. With God, the one who is faithful to God, the partner of the reader, has a great reward, which is equivalent to the reward of the reader, or greater if it is for sincerity and a desire for Allaah.

Preferred to read Ayat Al-Kursi after the prayers

Reading the verses of Al-Kursi after each obligatory prayer is one of the reasons for entering Paradise, so it is desirable after the prayer and after the dhikr to recite the verses of the Holy verse between himself. This is desirable. It came in several hadiths of Prophet Muhammad, so if you recite it after each prayer, then this is better, and it is desirable to read it when sleeping The Kursi verse is also authentic in the hadith on the authority of the Messenger of God that it is one of the means of healing from Satan and protection from Satan when sleeping if he wants to sleep at night.

Is it better when need, prayer, or supplication?

Whoever wants something, praises his Lord first, then prays on the Prophet,

then supplicates, raises his hands after the prayer, or supplicates in prostration,

all of that is good, or outside the prayer, raises his hands and makes supplication, and insists on supplication,

this is what is prescribed. Because Your Lord has said, “Pray to Me, and I will respond to you. But those who are too proud to worship Me will enter Hell forcibly.” Ghafir

Fadalah bin ‘Ubaid (May Allah be pleased with him) reported:

The Messenger of Allah (ﷺ) heard someone supplicating after his prayer without praising Allah and without supplicating Allah for the Prophet (ﷺ). Concerning him,

the Messenger of Allah (ﷺ) said,

“This man rushed.” Then he called him and said,

“When any one of you have performed Salat (prayer) and wants to supplicate.

let him praise Allah first then glorify Him in the beginning, and then he should supplicate Allah for me. Then he may supplicate for whatever he likes.”

Means of memorizing the Noble Qur’an

We recommend that you take care to memorize the Noble Qur’an.

at the appropriate times when your heart is ready to read, such as after the dawn prayer, such as during the night.

at times you meditate, appropriate in which your heart and tongue meet.

The Noble Qur’an only touched by the pure

so you must whenever you want to read from the Noble Qur’an to purify yourself.

that the Messenger of Allah,ﷺ,

sent to Amr ibn Hazm it said that no-one should touch the Noble Qur’an unless he was pure.
The best time for my child to start the Noble Qur’an
You know your child best and you can try as early as possible. An innocent heart free of a lot of sins can absorb well in them much better. Some kids learn to speak early while some take time.

But whatever age or stage they are, it depends on the child’s ability and effort.

it may take 2-10 years to completely memorize the Noble  Qur’an.